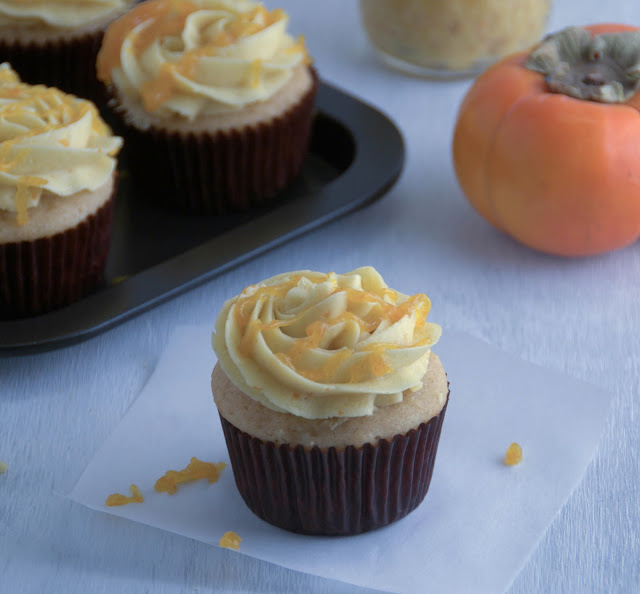 Apple Cider. Persimmons. An unusual combination of flavors that really work so well together.

I couldn't have picked a more hectic week to do a more involved than normal cupcake. Pretty much everything we had going on with life, kids and work was happening. I was determined to fit in the time to make these cupcakes

A wise person once told me that to get anything done ask the busiest person you know. Because they know how to schedule their time to get everything done. I do find that if I have more things to do, I get them done in a timely manner rather than when I don't have much going on, I tend to really slack off. 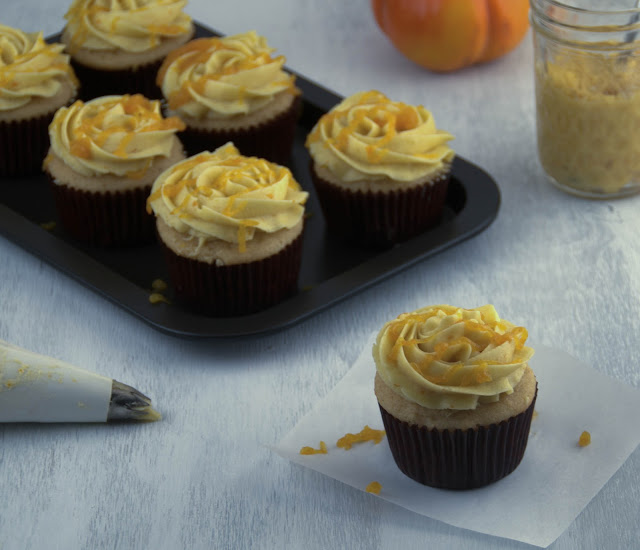 I love making cupcakes and can never just make a cupcake and frost it. I love to make them filled as well. Similar to a cake having a filling or frosting between layers, these cupcakes have a persimmon curd filling to go with the persimmon buttercream frosting. 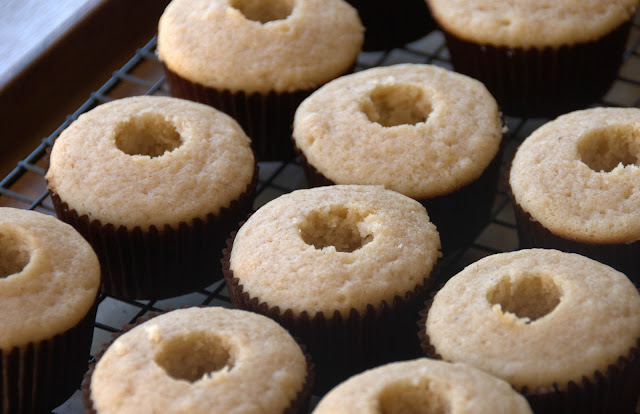 I had seen some gorgeous Fuyu persimmons at one of our local farmers market the week prior to making these and lucked out that they were there the week I made these. Persimmons are a short season so get them when you can!

For apples and apple cider we went to our local orchard, Gilcrease Orchards, for apple picking, other fall vegetables ( that we can pick ourselves) and their famous apple cider. The apple cider is amazing on its own or used in baked goods.

I knew I wanted to make a cupcake with persimmon curd filling, but I wanted more than just a vanilla cake. So I decided on an apple cider cupcake. And persimmon buttercream of course. 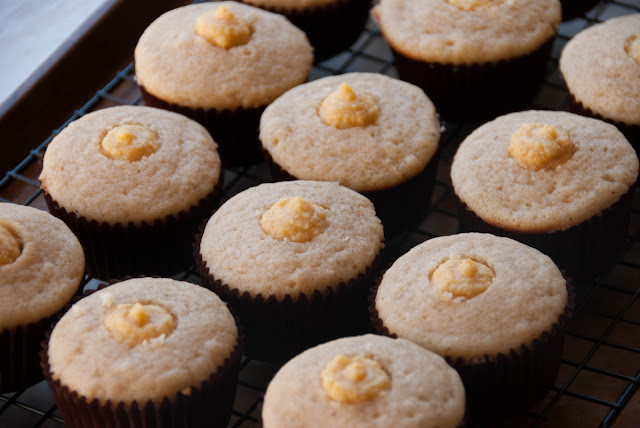 I use an apple corer for cutting out the middle of the cupcake instead of a piping bag with a tip and shoving into the cupcake because I have totally used too much pressure and blown out the bottom of cupcakes before. Oops 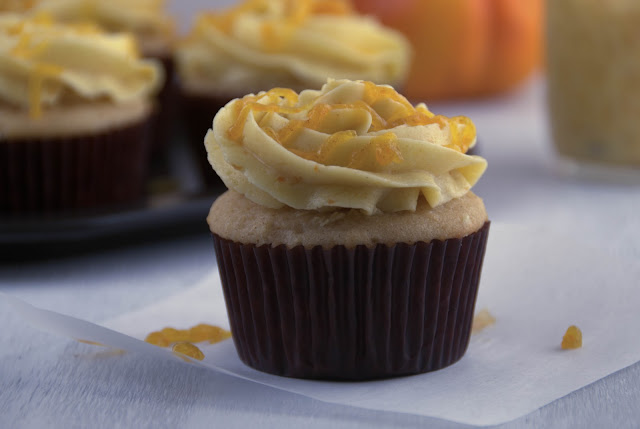 So good. I love filled cupcakes. It's like a secret middle since one doesn't normally expect a cupcake to have a filling. I am a big fan of making homemade curd, I have made meyer lemon, passionfruit, mango, guava, pineapple etc. I am a curd making fool. This persimmon curd is amazing in these cupcakes as well as swirled into ice cream, spread on toast etc. 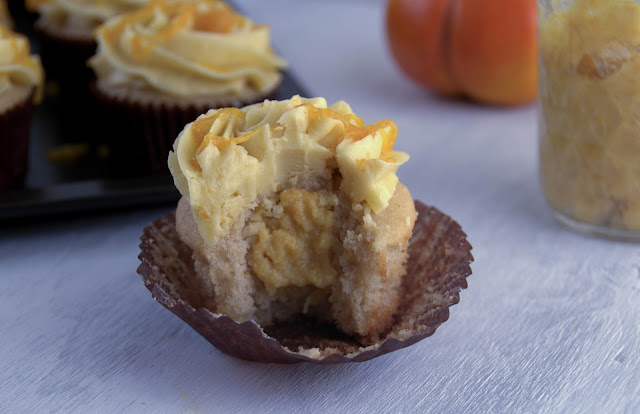 These cupcakes have several components to them - the cupcakes, the filling and the buttercream. You can make the curd a day ahead of time to save time.

Use fuyu persimmons, the ones that look more like squat little pumpkins than the heart shaped Hachiya. Those need to be almost squishy overripe before using.

Instructions for the curd:

Puree the persimmons with the lemon zest and juice until smooth. Set aside ¼ C for the buttercream. Pour remaining puree in to a medium saucepan, set aside.

In the top pot of a double boiler or in a bowl set over, but not touching, a pan of simmering water, whisk together the egg yolks, whole egg, sugar and salt. Whisk until thickened and smooth, about 5-6 min. Remove from heat and stir into the saucepan with the persimmon puree. Place pan on stove and heat on medium, stirring until thickened about 4-5 minutes. Remove from heat.

Add in the cold butter cubes one at a time and stir again until fully incorporated.

Pour curd into a glass bowl, straining through mesh sieve with a spatula to separate any egg solids,  then press plastic wrap down on the top of the curd to prevent a film from forming on top. Refrigerate at least 2 hours until cold and set. Chilling overnight is best if you have the time.

Instructions for the cupcakes:

Combine flour, baking powder, salt and spices in a small bowl, whisk and set aside.

In bowl of a stand mixer combine sugar and melted butter; add in eggs one at a time, mixing well after each addition.

Add the apple sauce and vanilla and mix again, scraping down sides if needed.

Alternate adding in the flour and apple cider beginning and ending with the flour.

Once all is combined mix another 30 seconds. Don’t over mix. Divide batter amongst the muffin tins, filling each up about ⅔-3/4 of the way full.

Bake for 15 min or until a toothpick comes out clean, or the tops bounce back when pressed down lightly. Cool in the pan for 5 minutes, cool completely on a wire rack.

Set a pan filled with an inch of water on the stove and heat to a simmer. In a bowl of a stand mixer combine the egg whites, sugar and salt and whisk over simmering water until the mixture reaches 160 deg f. Make sure the bottom of the bowl doesn’t touch the water.

Once it reaches 160 deg f immediately remove from heat and set bowl back on stand mixer. Using the whisk attachment slowly raise the speed to high and beat until the bowl is cool to the touch and the mixture is thick and white ( think marshmallow fluff), about 10 minutes. You can either keep the whisk attachment on or switch to the paddle at this point.

With the mixer on medium speed add the butter in one tbsp. at a time until it’s all the butter is in, the frosting may look soupy but don’t worry it will come together.  Slowly raise the speed back up to high and whip until it thickens and you hear and see a difference in texture.  Scrape down the sides as necessary. Add in the persimmon puree and curd and mix on low until it’s all mixed in, if it gets soupy looking again just mix on medium high to get it back to the right texture.

Use an apple corer to take out a piece of the center  of cupcake, being careful not to go all the way through the cupcake, then fill with about a tablespoon or so of curd.

If you don’t have an apple corer you can use a piping bag and a long piping tip and injecting the cupcakes with the filling is fine. I have blown out through the bottom of cupcakes before doing it that way so I stick with the apple corer method. So either way is fine. Just be careful not to use too much pressure. When I use the apple core technique I replace back a small bit of the core I took out on top of the filling so it’s easier to frost.

Once they are all filled, frost the tops with a big swirl of buttercream and drizzle more puree on top. I used a basic pastry bag and a 1M open star tip. Any bag or piping tip would work, or you can just use a spatula.

These are best eaten at room temp, if chilled set out until they are room temp before serving.

This is a several step recipe for each component but well worth the effort. Read through the recipe carefully several times, make sure you have all ingredients on hand before you start. The curd can be made a day ahead of time to save time on the day of baking and assembly. The Swiss meringue buttercream is a simple technique once you get the hang of it. If your kitchen is hot (over 75 deg) it will make the buttercream too soft, almost melty. If its not coming together you can always pop the mixing bowl into the fridge for a few min and whip again. This type of buttercream is silky and smooth, more butter forward than sugary like traditional American buttercreams tend to be. I much prefer less-sweet frostings like Swiss meringue.

Fuyu persimmons are my fave and what I used. If you want to use Hachiya you need to make sure they are almost overripe. They have an almost pudding like texture to them when ripe, and I have not made this recipe before with them so I can't tell you how it would work with them since their consistency is much more watery. 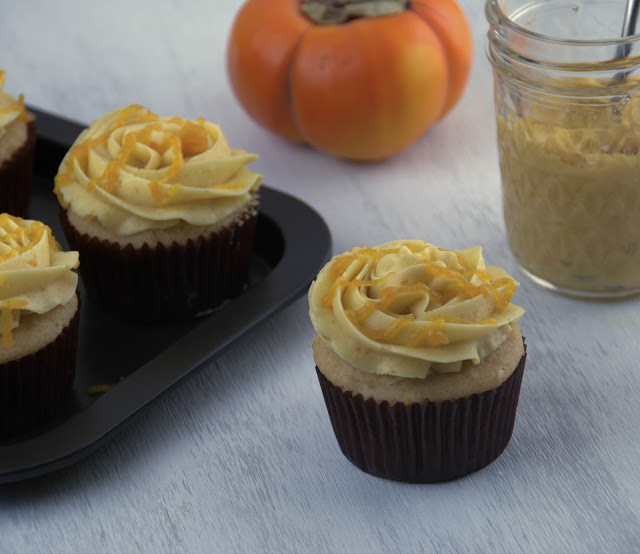