Grilled Korean Chicken Wings with Honey Gochujang Dipping Sauce are a spicy and tangy version of chicken wings. Perfect as an appetizer for any party or light summer meal. 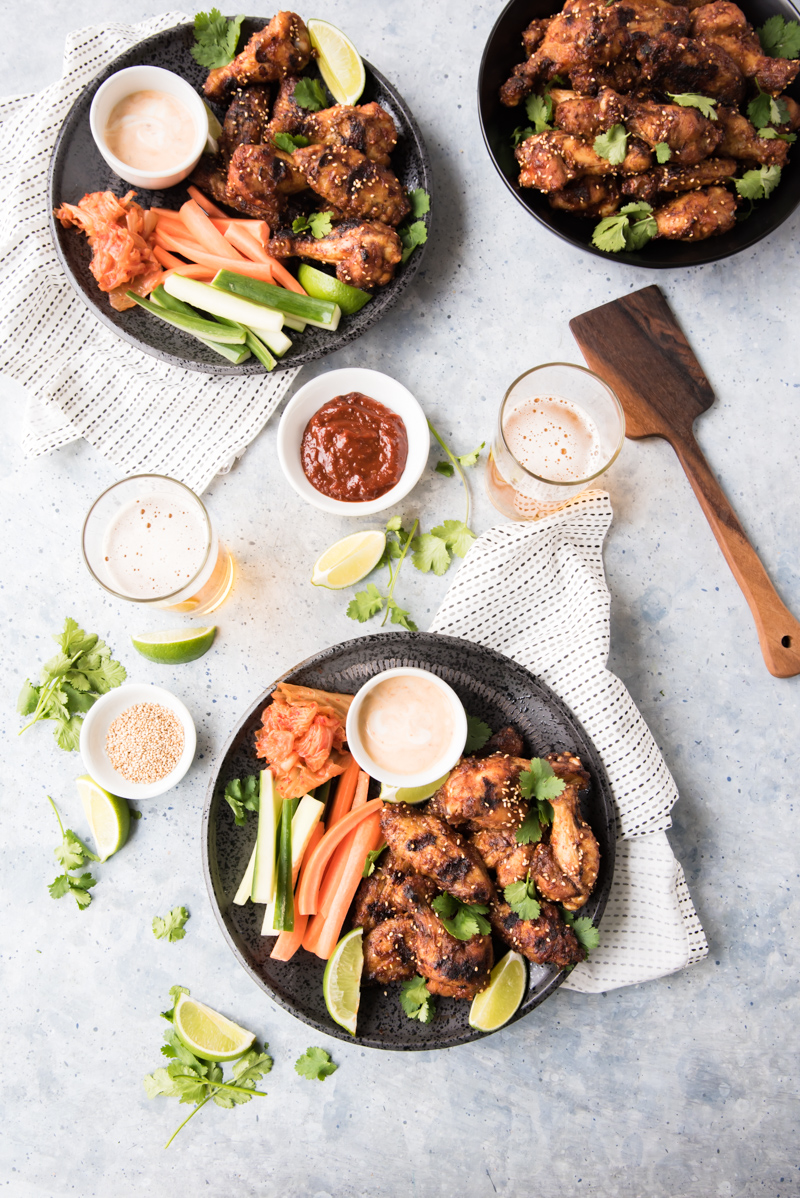 Summertime is here, so is Memorial Day weekend which means get those grills and BBQ's ready to grill all the foods!!  Foods like these crazy tasty Grilled Korean Chicken Wings with Honey Gochujang Dipping Sauce. I am a huge fan of chicken wings, baked, fried or grilled.

I had some of best chicken wings every on Oahu last year at Pig and the Lady - Laotian friend chicken wings. They were similar to Korean chicken wings, which are fried twice, and came with a pickled chili, fried shallots, roasted peanuts and kaffir lime topping. They were absolutely amazing, and I have yet to try to recreate them at home. One reason is because I don't have a deep fryer and am not fond of deep frying in general.

One day I might  get an air fryer that so many friends love. But until then I will bake or grill wings. These grilled wings aren't as crispy as the traditional twice fried Korean wings, but they still end up pretty crispy and that is because I have two secret reasons on how to get crispy chicken wings when grilled. Well not so secret now since I am about to tell you! 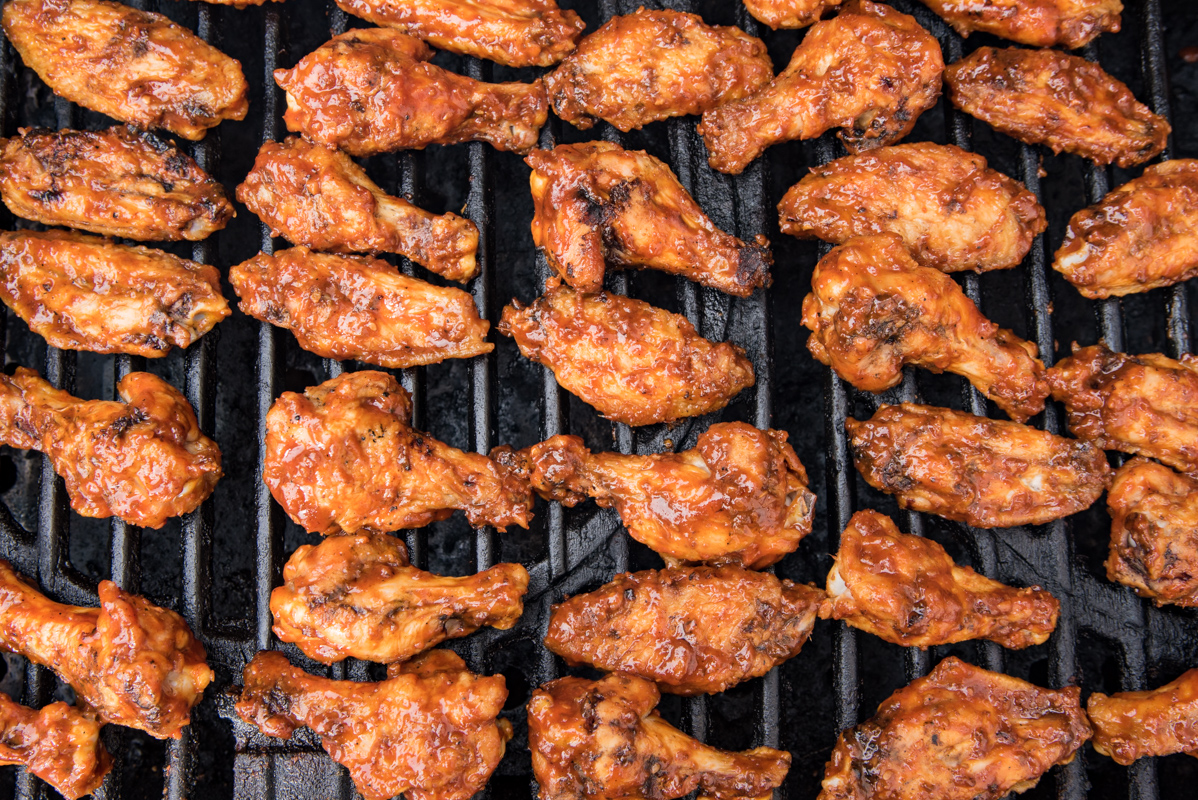 These chicken wings are seasoned with salt, pepper, and me secret ingredient of baking powder that helps get them crispy as the fat renders out while cooking slow and low on the grill. Another secret to wings is starting on low, indirect heat to render out the fat first them turn up the heat to cook the chicken all the way through. This helps crisp up the skin nicely without having to deep fry.

The baking soda helps dry out the skin as the fat renders out to keep it crispy. I first grill with just the wings seasoned with the salt, pepper and  baking powder. Once they are almost all the way cooked, I remove to a bowl to toss in sauce then back on the grill for another 5 minutes or until the sauce starts to caramelize. 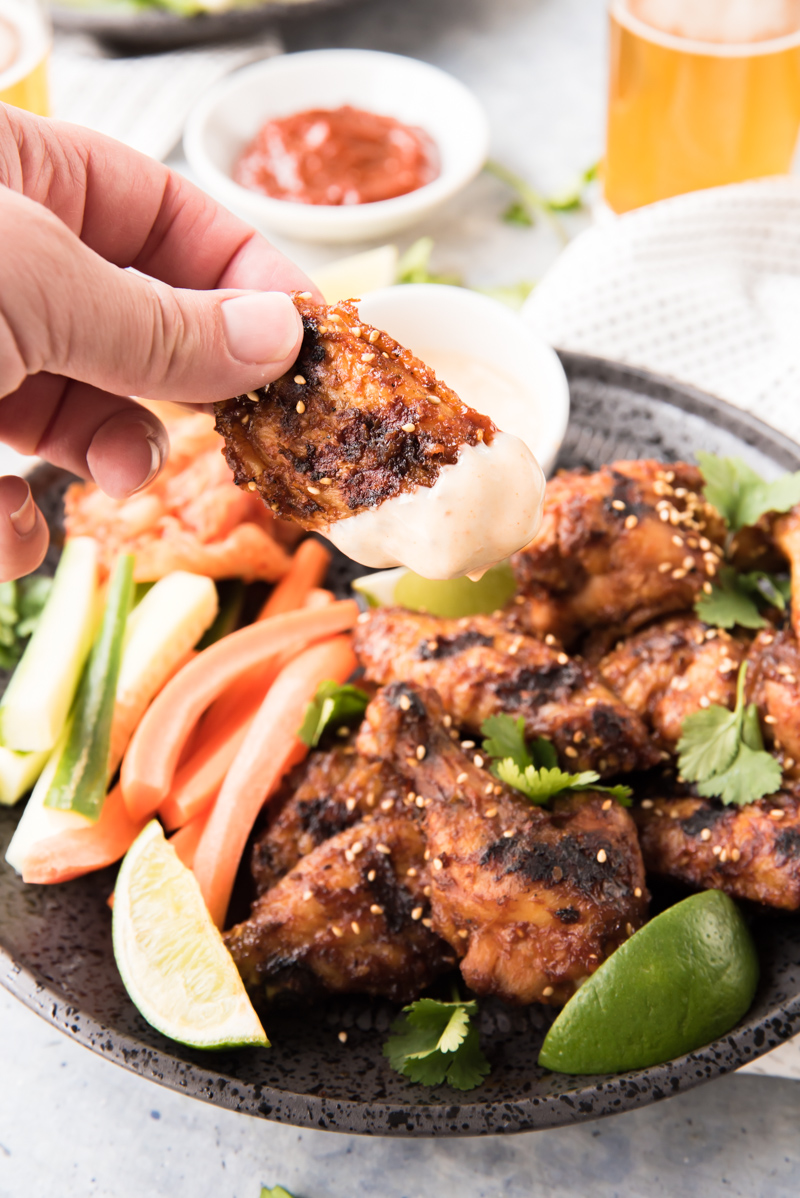 Traditional buffalo style wings are served with carrots, celery and ranch or bleu cheese dressing. I served these wings with carrot and cucumber sticks, kimchi and a honey yogurt sauce with Gochujang, A Korean chili paste used in the Korean BBQ sauce I used and is also used when making Kimchi.

It is a very versatile chili paste and is one of the most popular condiments of Korean cuisine. I love it on both the chicken wings and in the honey yogurt dipping sauce. I topped the wings with sesame seeds and cilantro and served with lime slices. Don't forget the cold beer when serving these delicious grilled Korean chicken wings! 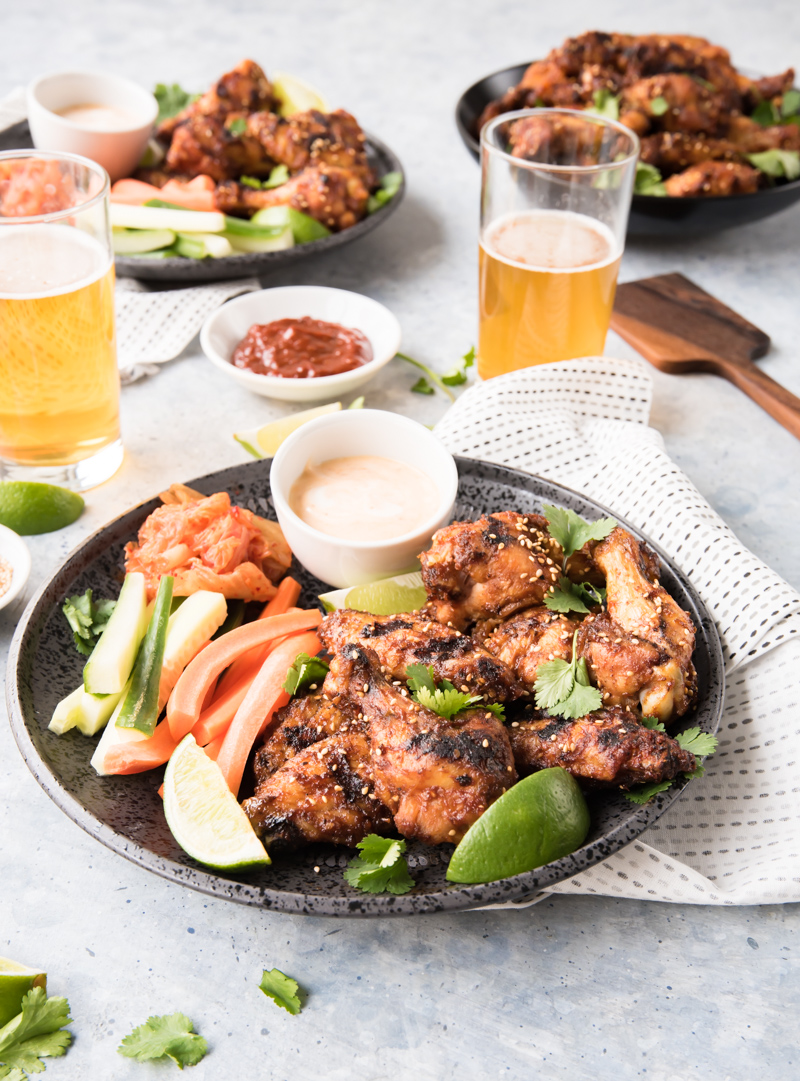 If using a smaller grill you can grill the chicken wings on low the entire time, being careful to watch to make sure they don’t burn. The purpose of the grilling with some of the burners off is to create an indirect heat source to slow cook the wings to render out the fat to make the skin crispier.

If using a charcoal grill heat coals around the edges of the grill and cook the wings in the middle.