I am such a huge fan of vanilla and I think it's anything but "vanilla" as in bland. plain, boring, basic. 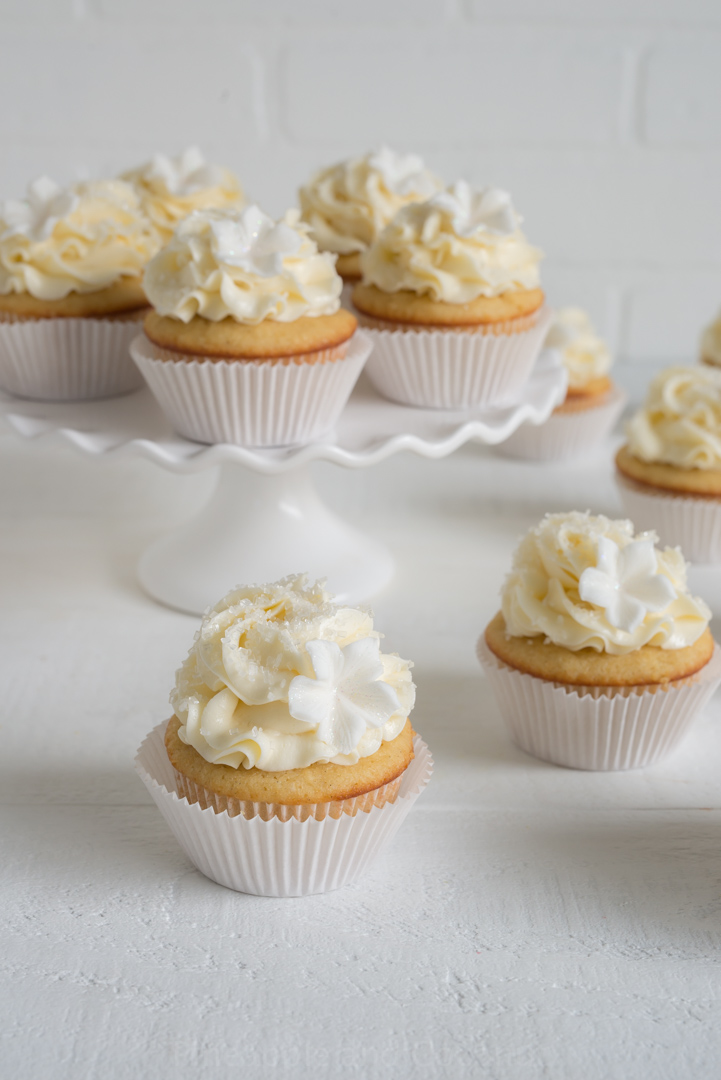 I have chocolate cupcakes on my blog, plus a few other fun flavors, and I realized I don't have a vanilla cupcake recipe. At least not on this blog. You see, this isn't my first blog. I have actually been blogging for a long time. I started with a cupcake blog.

A friend encouraged me to start it after she saw some cakes and cupcakes I made for friends and family or just took to work for the fun of it. The blog was fun, it was great during the huge cupcake craze, I even got featured a few times on the big cupcake sharing site, "Cupcakes Take the Cake". But I wasn't that serious about blogging those years. I just did it for fun. 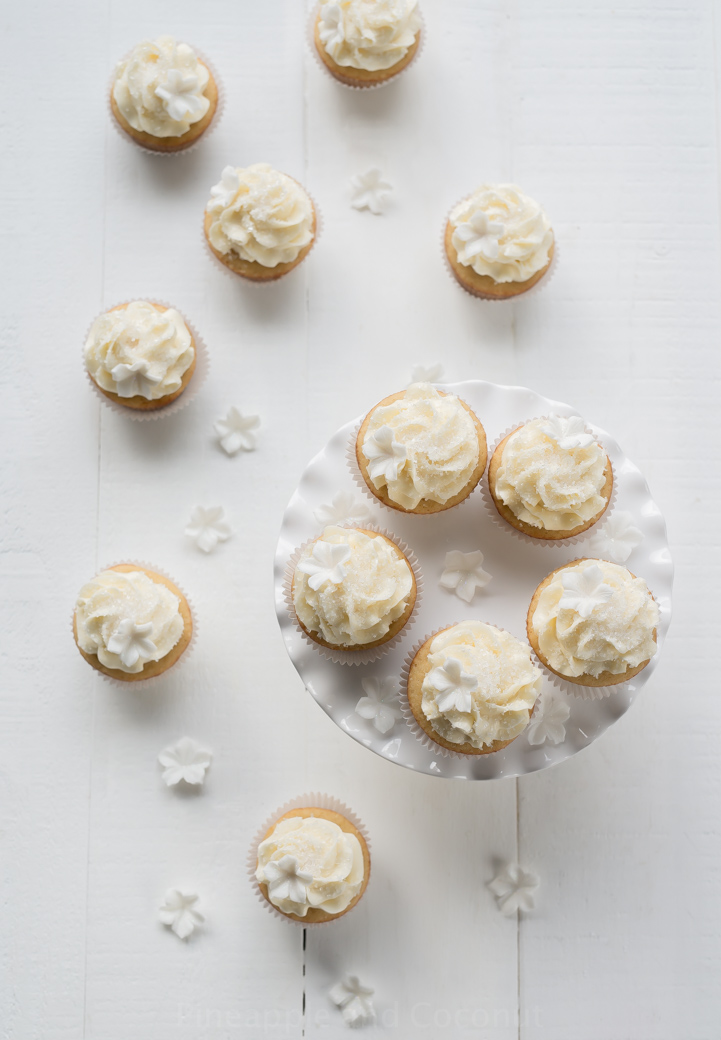 When I had my cupcake blog I did a ton of decorating with fondant and gumpaste. I don't do as much anymore, but I still have all my tools for making flowers like these. Easy to make and I dusted them with some edible glitter for shine. They are perfect for these vanilla cupcakes. 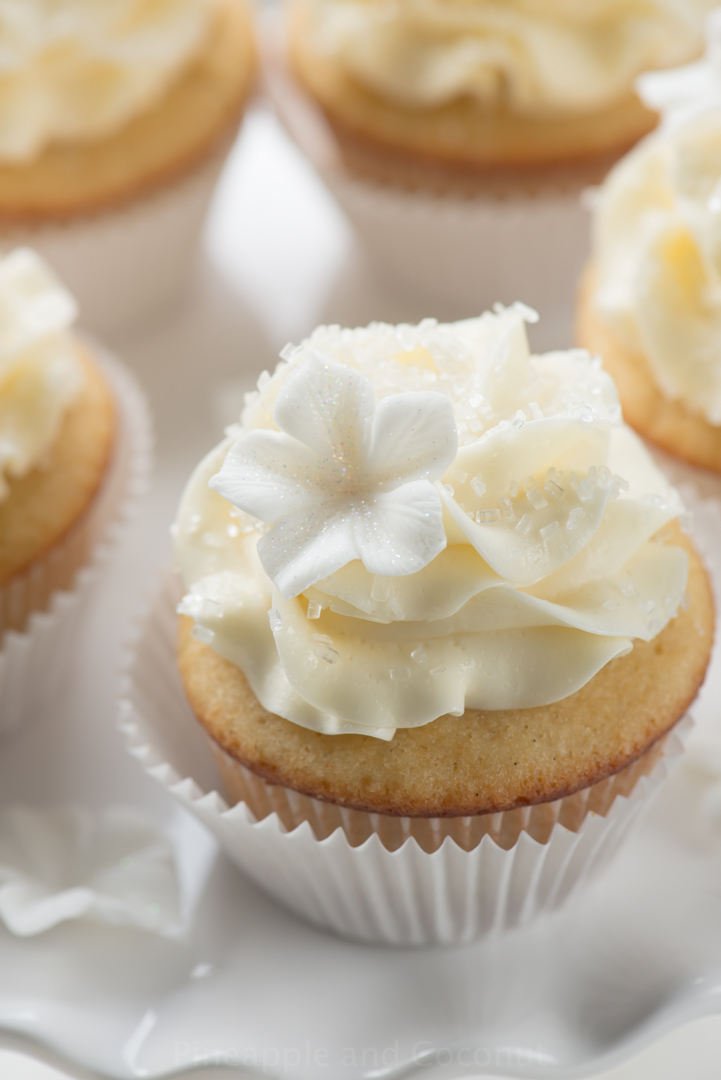 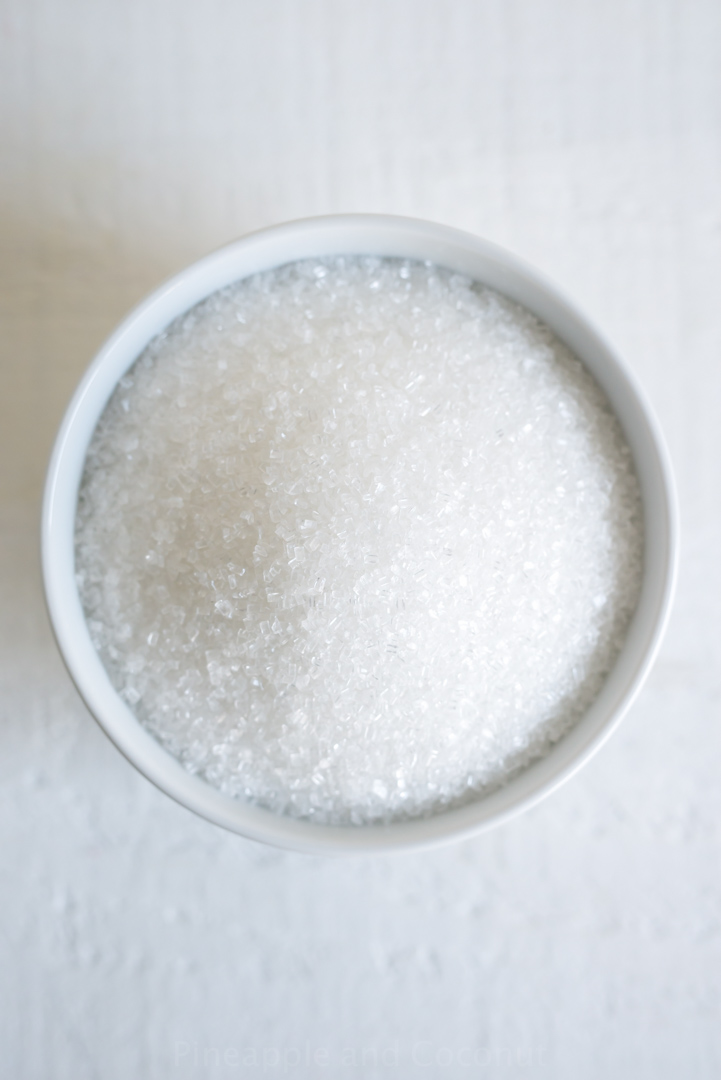 And a good amount of this fun Sparkling Sugar I got from Bob's Red Mill. All the #VanillaWeek bloggers received items in the mail to use in our recipes.

Sparkling sugar and cake flour from Bob's Red Mill, several vanillas from Nielsen-massey ( bourbon vanilla and Tahitian extracts and vanilla bean paste), 20 yes TWENTY pounds of sugar from Dixie Crystals ( Love that they are Non-GMO), a lovely baking mat from Silpat ( which I used to roll out the fondant on to make the flowers for these cupcakes) and Pure Vanilla cookbook by Shauna Sever. Fun stuff. AND These are all in the prize package for the giveaway ( entry form at the end of this post). 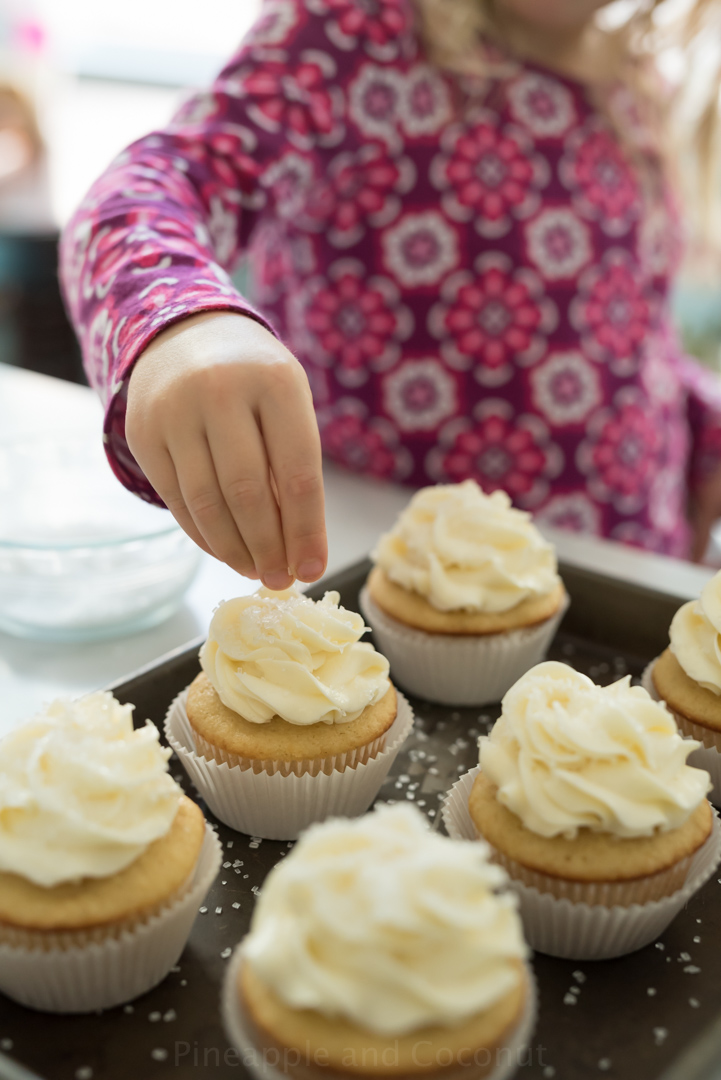 My youngest only goes to school 3 days a week. So on Tuesdays and Thursdays she gets to  be my kitchen helper. She LOVES helping prep and cook and of course, sprinkle sugar all over cupcakes.

More like just dump a bunch right on the top, but whatever. She had a blast doing it. Love my little kitchen helper. If only she was better at washing dishes and knew how to make coffee for me since she and her sister like to  get up so dang early on the weekends... 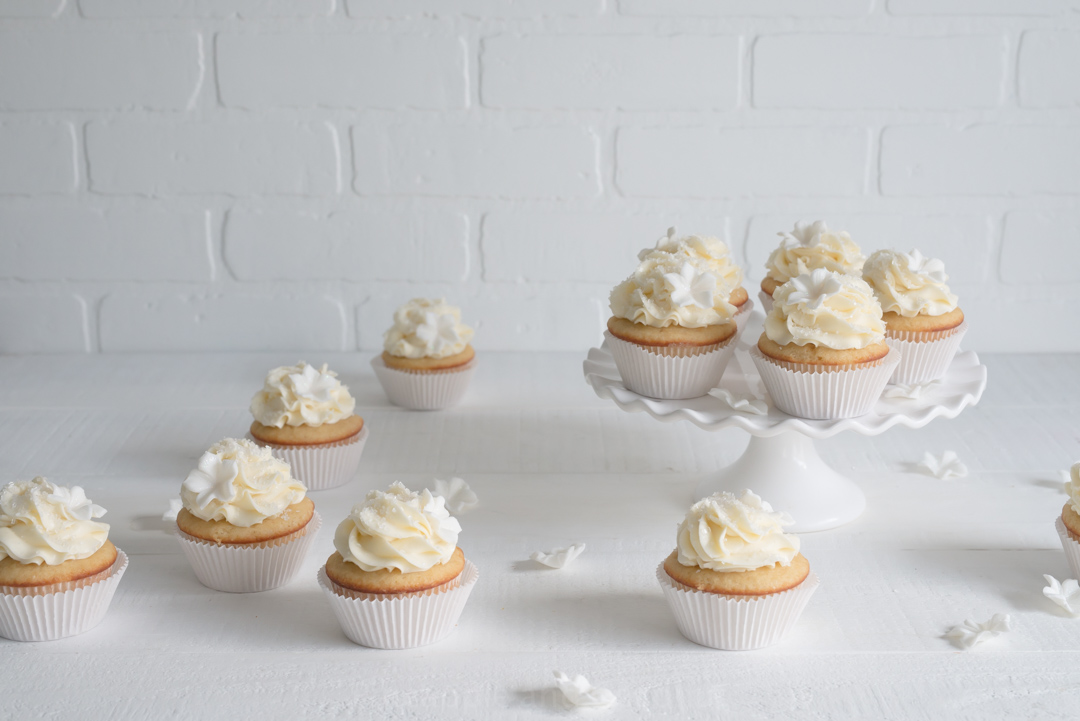 Back to about these cupcakes. For some reason when it comes to vanilla cupcakes I have always struggled in my search for the perfect one. I have an awesome chocolate cupcake recipe, but that perfect vanilla recipe has always eluded me. I have tried so many "perfect" "Best" recipes online and none have really met my expectations.

So many end up flat, sunken, and so light and airy that they would smush under any amount of frosting. My recipe calls for lots of vanilla and sour cream and hers doesn't have sour cream. Mine also is reversed creamed ( flour first then add butter - which is the same method as the vanilla cupcakes on Shauna Sever's blog)  Guys, these are what I was looking for.

A dense cake like crumb, not too light but not a heavy brick like a bran muffin, heavy enough to hold up a pile of Swiss meringue buttercream, moist ( I know, ew I hate that word too but its ok when describing cake) and amazing vanilla flavor.

To make the cupcakes: 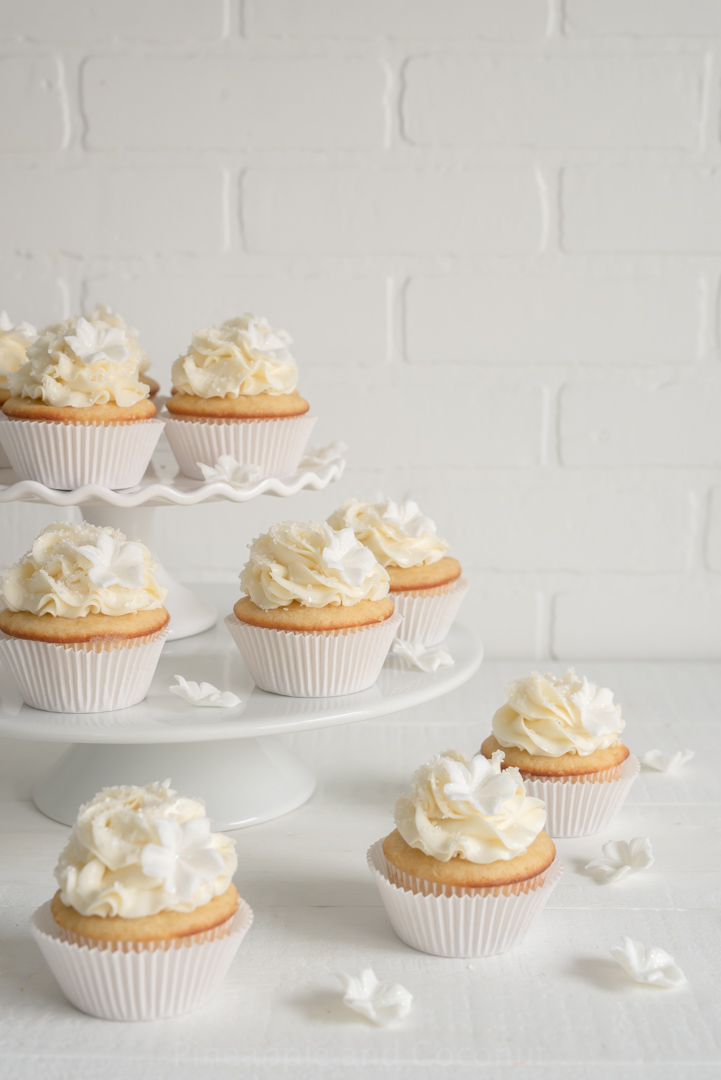 Disclosure: Nielsen-Massey Vanillas, Bob's Red Mill, Silpat, Quirk Books and Dixie Crystals/Imperial Sugar . These companies are also providing the bloggers with samples and product to use for #VanillaWeek. All opinions stated are my own. I received no compensation for these posts, just the items from the brands. 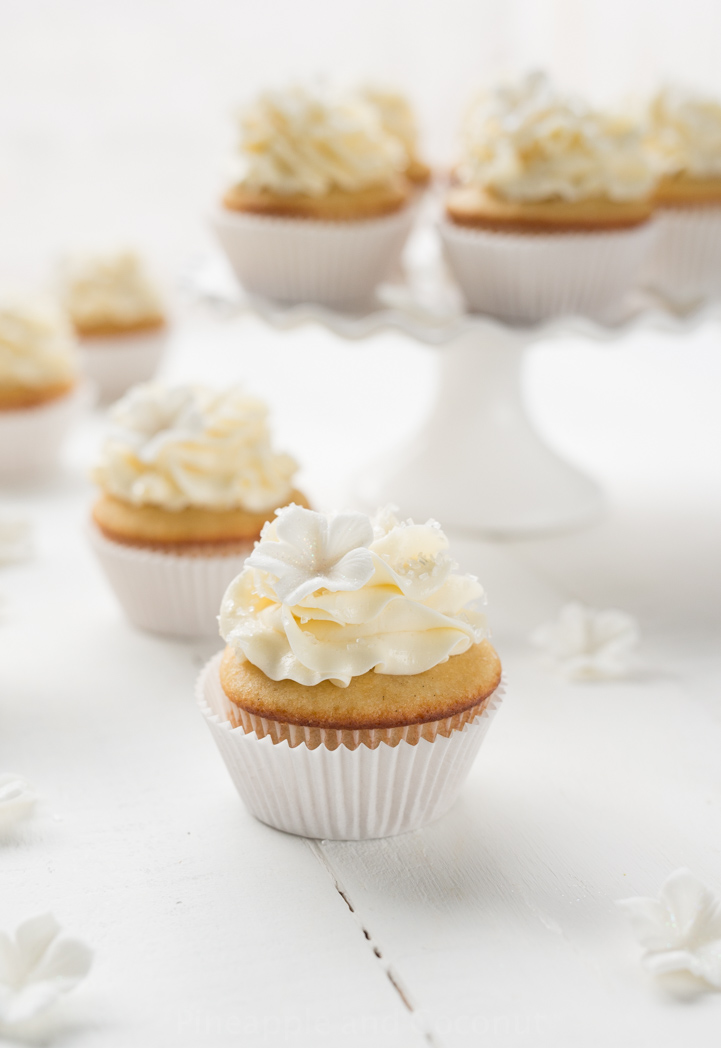 A big thanks to Terri of Love and Confections for hosting this awesome #VanillaWeek.
Check out the other recipes today!
Here are more #VanillaWeek Blogger recipes:

Cranberry & Pistachio Pudding Cookies from Take A Bite Out of Boca.

Vanilla Bean Panna Cotta from That Skinny Chick Can Bake.