We eat a lot of Belgian waffles in this house. And by we I mostly mean my kids. And because we eat a lot of waffles, I always make big batches of them to freeze and thaw when needed so I am not waking up at 4 am on school days to make a fresh batch each time. That is just crazy talk. 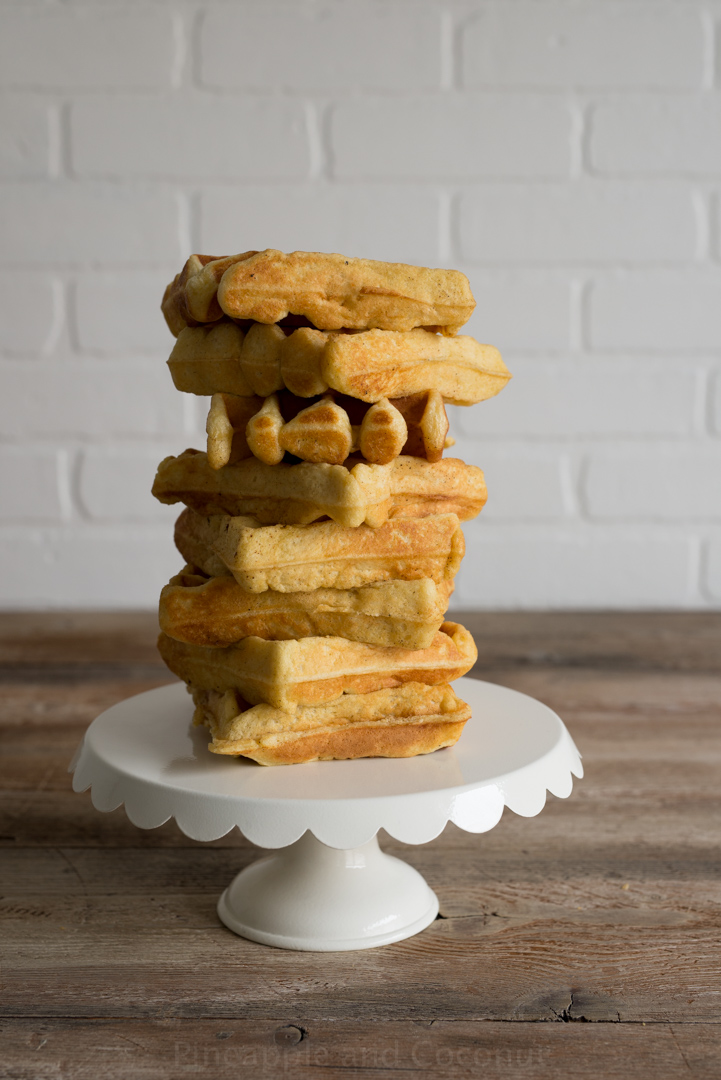 When Magimix emailed me asking if I wanted to try their Vision toaster to review and give away I said "sure!" I have an old toaster that, is, well, old. I never know if its toasting or burning and it doesn't matter the setting, it does what it wants. I was all for trying out a new toaster (Giveaway is now over). 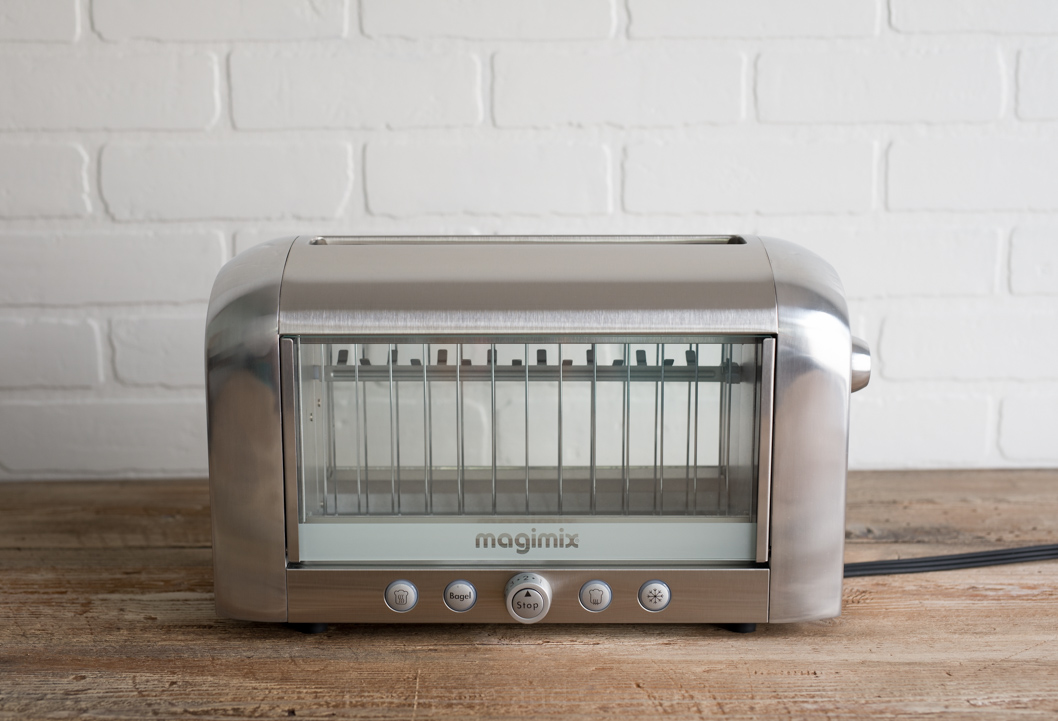 So very spage age Jetson like and I can watch whatever I am toasting so I know I won't burn it. I mean the toaster won't burn it. I was thinking about just toasting some bread for this post, but I realized I toast something else way more than bread. And that is waffles. 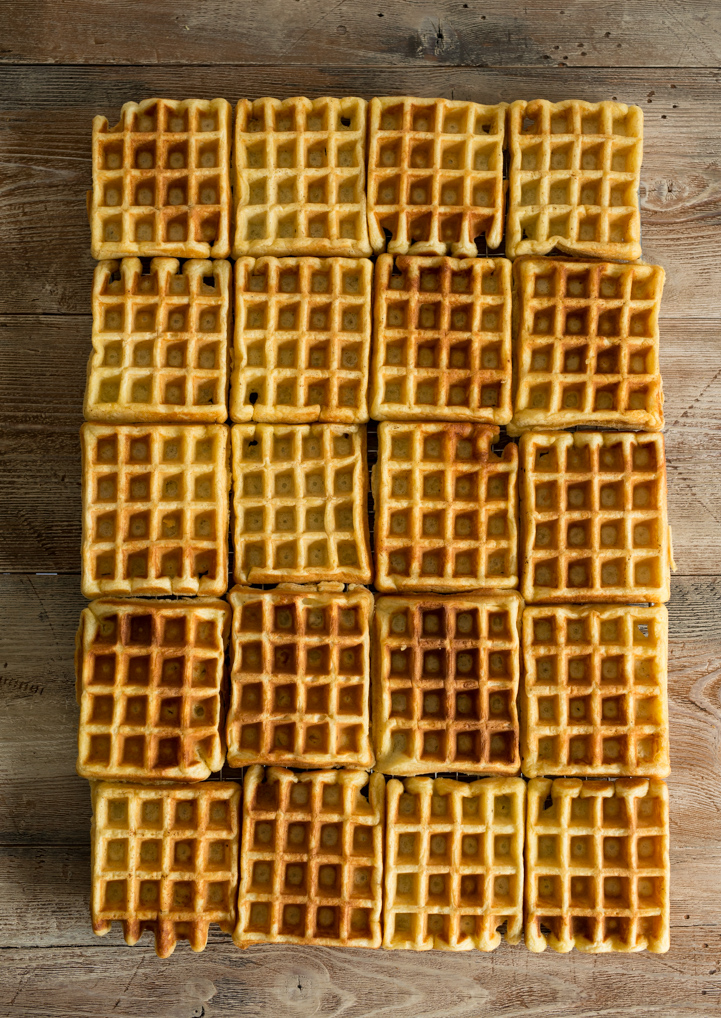 I will make a batch once or twice a month that lasts several weeks. Waffles are so great to thaw, heat and toast for busy school mornings, they are fun for making waffle sandwiches or on nights my husband is working late and I don't feel like making dinner or washing a ton of dishes we can have brinner!! ( Thats breakfast for dinner) My kids LOVE brinner. I will scramble up some eggs and or make some bacon to go with. Brinner is always a winner. 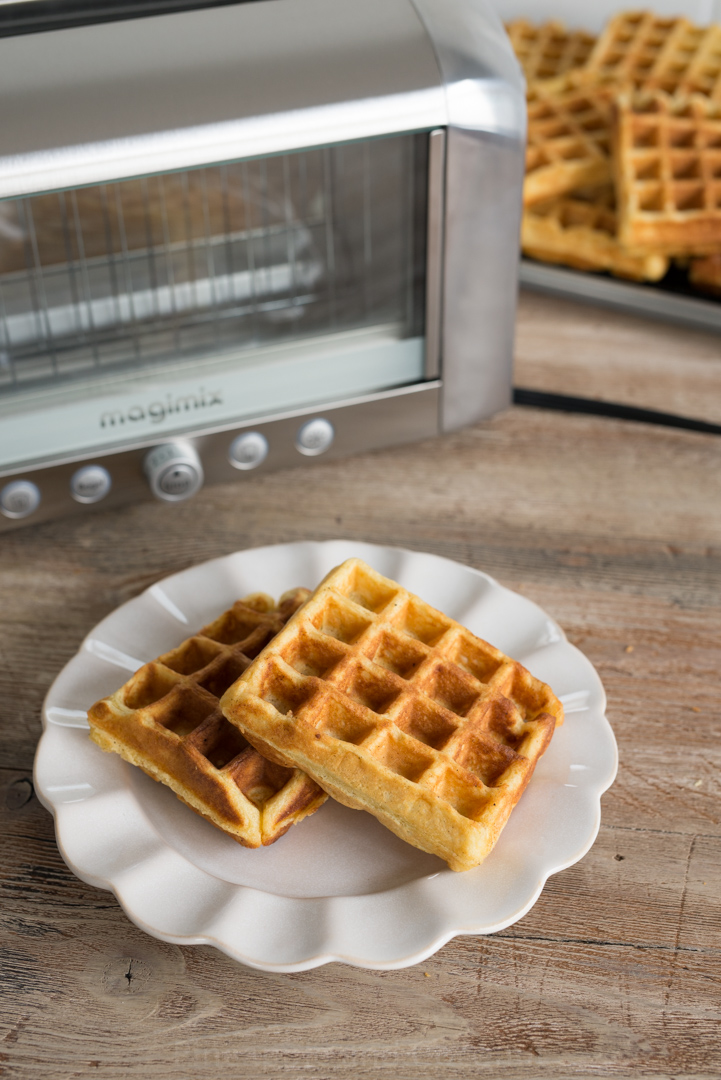 I have had a long standing love affair with waffles myself. Whenever I see a poll online, like on a friend's facebook page asking to choose from waffles, pancakes or French toast, I always pick waffles. I have never been the biggest fan of French toast - its good, just not waffle good. And I do love pancakes, but my heart belongs to waffles, especially big thick Belgian waffles. Years ago before kids I dabbled in figure competing/ figure bodybuilding. The diet was strict so that meant no waffles for a very long time. I continued my diet plan, slightly loosened up after one competition up until my wedding day, a bride has to look her best, and then it was honeymoon time. My husband and I honeymooned at the Kona Village resort on the big island of Hawaii. Meals were included. I was so sick of strict meals all carefully weighed and measured out that I went probably a little overboard, but who cares, it was an amazing vacation and the food, ooohh the food. Breakfast every day was some sort of protein like eggs, a giant fat fluffy Belgian waffle, a big glob of peanut butter and of course some Kona coffee. Waffles for 7 days straight. I watched my abs go from 6 pack to 1 pack and it was oh so worth it. 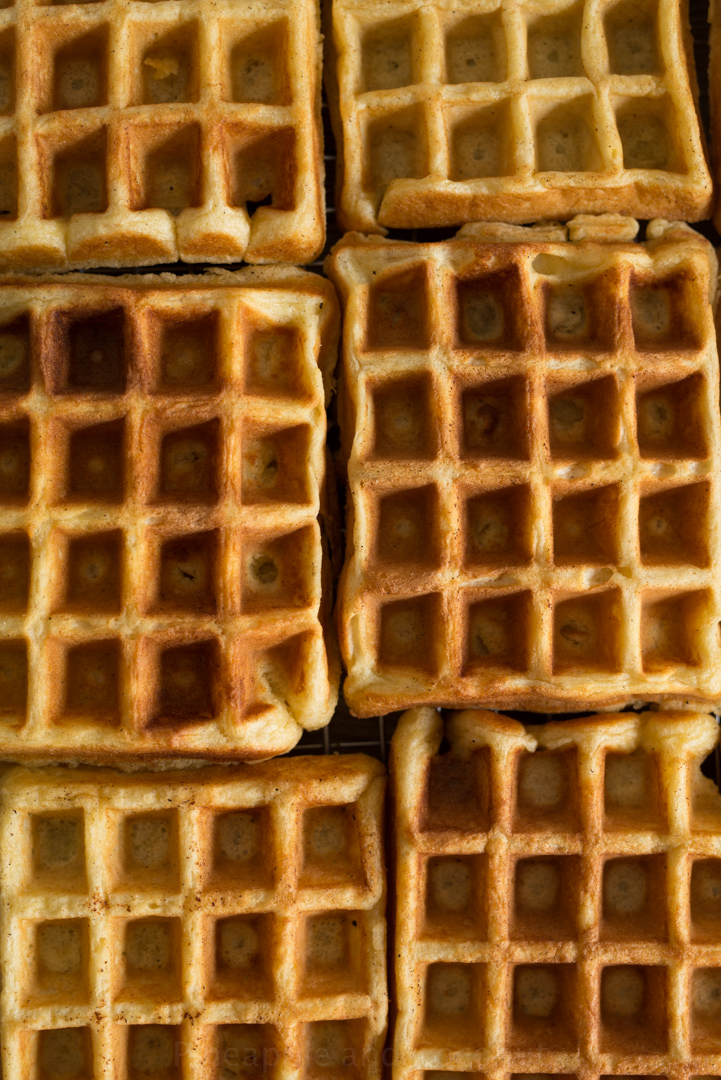 When I make big batches of Belgian waffles for my kids I have a little secret about them to make them seem like they are freshly made each time. I underbake them initially. Or is it cook? Does a waffle iron bake or cook? Either way - 3 min tops. The waffle iron will still be steaming like mad, and you have to be careful when removing the waffles as they are fragile and might stick a little - but they are cooked - just not fully crispy cooked.  I will then let them cool on a wire cooling rack before freezing. I let them thaw at room temp then I toast them. They come out like they were freshly made every time once toasted! 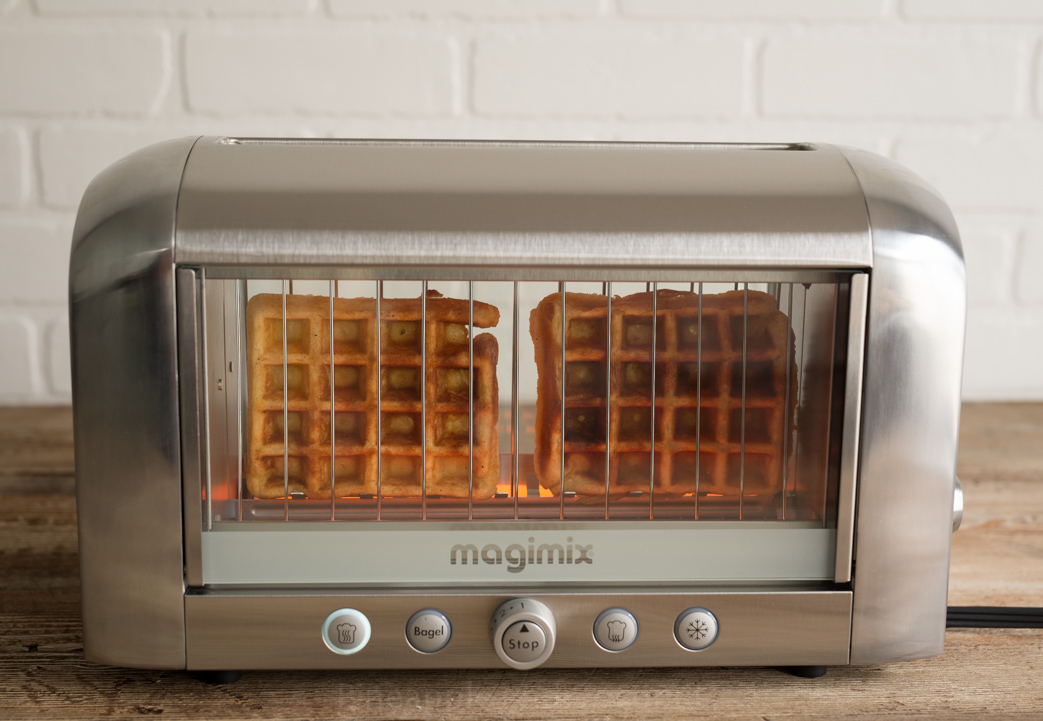 Golden toasty perfection. This toaster is awesome. My kids got to watch the waffles toast and let me know that they weren't burning like how our other toaster sometimes does. I think all appliances should have windows. This is why I could never own one of those fancy French stoves like La Cornue or La Canche. I like to see my food cooking in the oven not be all paranoid and open it every few minutes to see what is going on. I could go for a fridge with windows as well.  My kids could see what they wanted to eat without standing there with the doors open. My 4 year old loves to open the freezer and just stare at everything. See through appliances are genius. 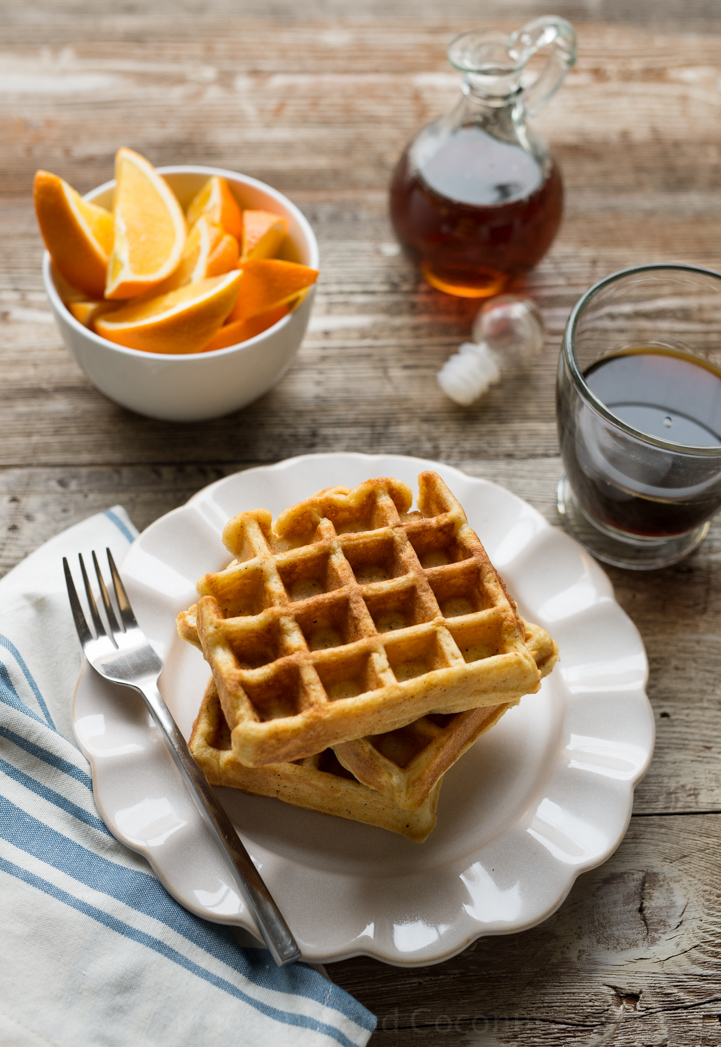 Here is my recipe for this big ol' batch of Belgian waffles.

I use a Krups Belgian waffle maker that makes 4” square deep waffles. The waffle yield will depend upon the waffle maker you own. You want the waffles slightly undercooked since they are being frozen for later use. If making to serve that day cook fully according to your waffle maker’s instructions. Cook times will vary on how many waffles you make as well. 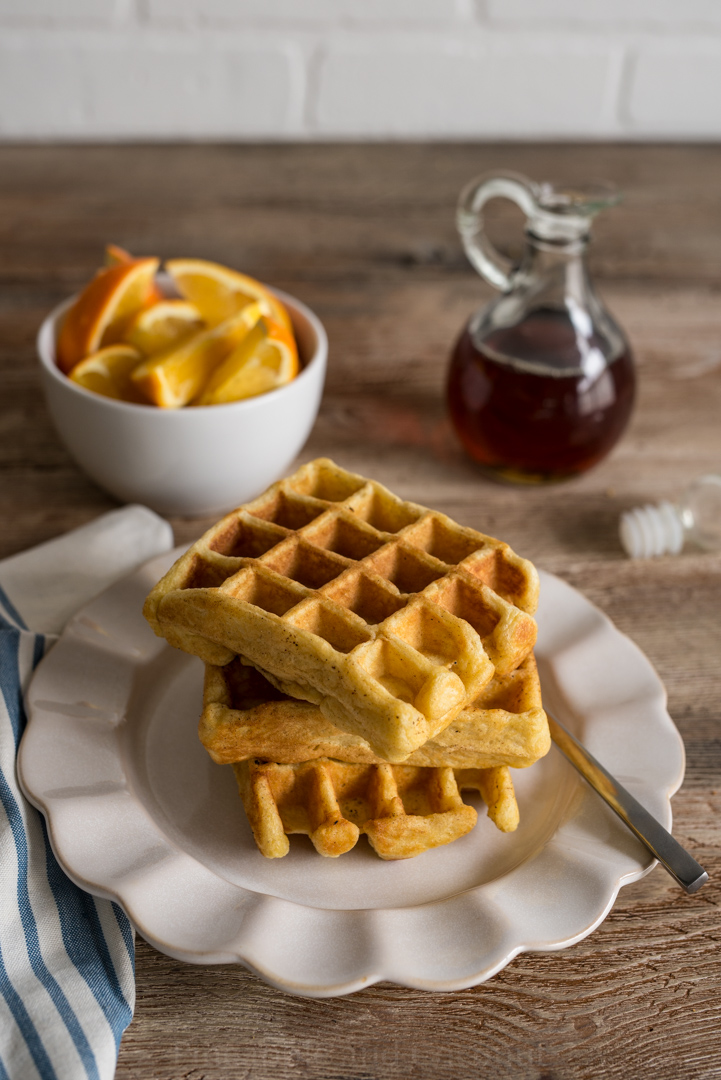 Of course I had to see how high I could stack them. I was going for 20. I made it to 17 and they fell so I tried again at 16. Who doesn't love a giant stack of Belgian waffles?? 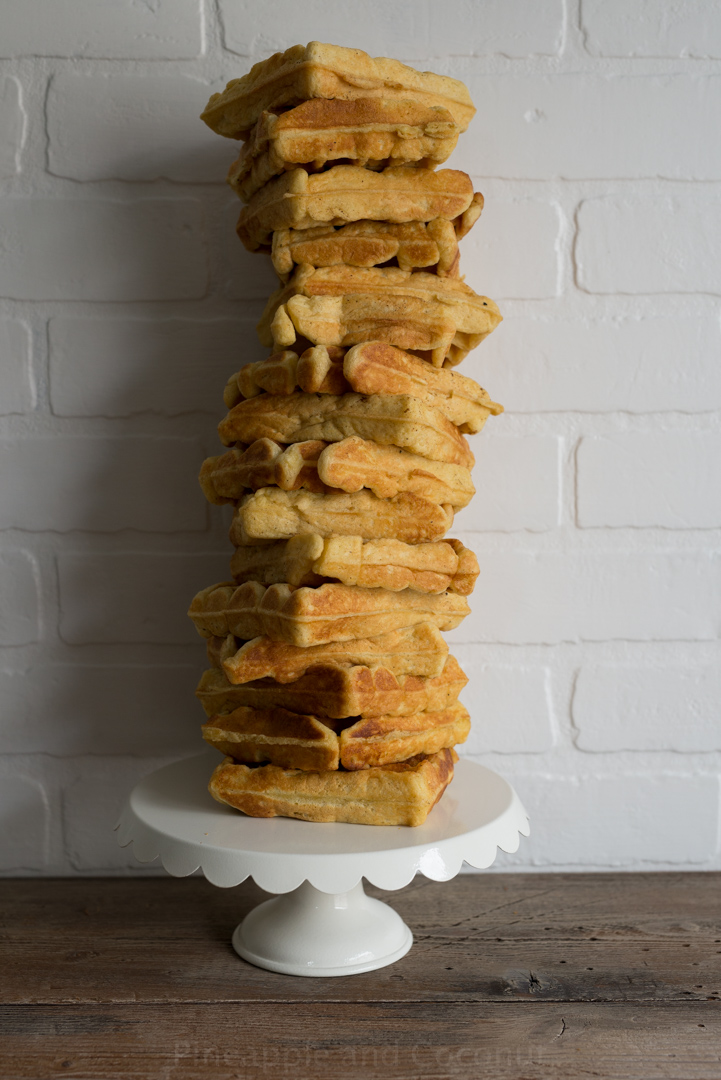 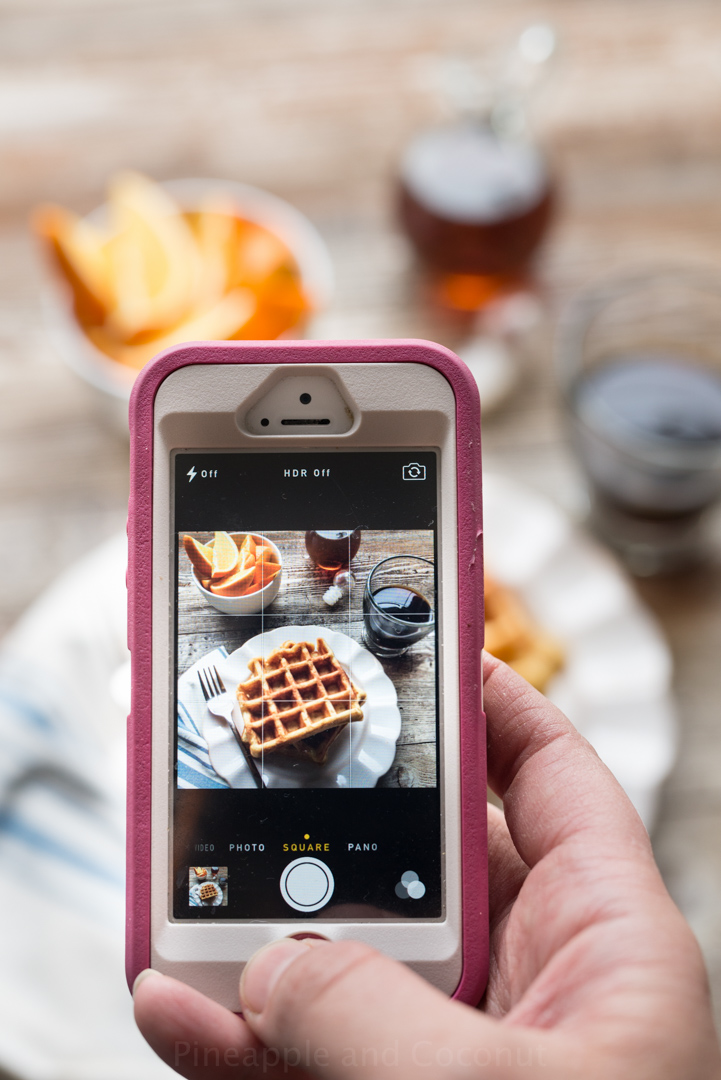 This post is sponsored by myself and Magimix Usa. I received a toaster to review and no other compensation.  All opinions are my own.