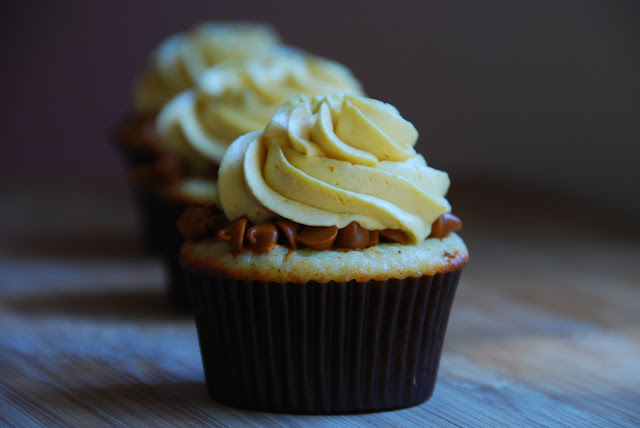 That's my 4 year old's new favorite word. She calls everyone " ridiculous" these days. Pretty funny if you ask me. Cracks me up when kids use big words, even more so when they use them in the correct context.

Since its full blown pumpkin everything baking season I am adding in my second installation after my gluten free pumpkin waffles with something much more indulgent, and, well, ridiculous. Because these are ridiculously good. 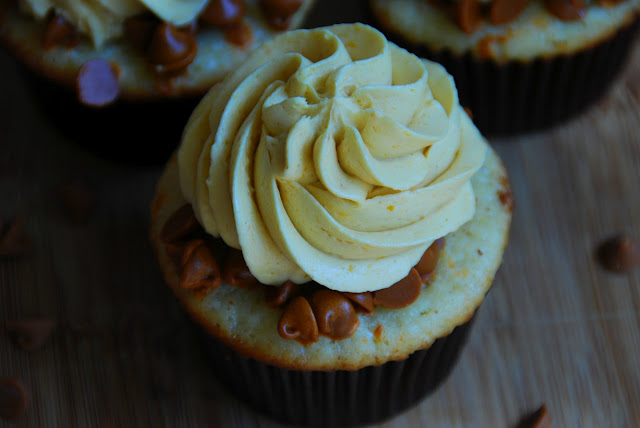 It seems everyone that food blogs has a version of a pumpkin cupcake out right now. I think of an idea, quickly "google" it to see if anyone else has made it or anything similar, because we all like to have our own original ideas or adaptation of another recipe. I kept coming up with ideas that were like JUST made. Ugh. I talked to a friend, another food blogger who specializes in AH-mazing cupcakes and cookies. Steph's creations are ridiculous, I wish I had half her talent, any way, we were discussing do you just make it or try for something different so you don't look like you're copying. Well if I make someone else's recipe I give them full credit. If I adapt someone else's recipe, I give them full credit. Its how us food bloggers roll. I was discussing my recipe idea with my friend, and she gave me the idea to dip the tops in the chips rather than mixing them in. She had done it several times before and not only do they look cool with the chips peeking out below the swirls of icing, but its a neat surprise to bite into. Just a little something different that I kind of really like. 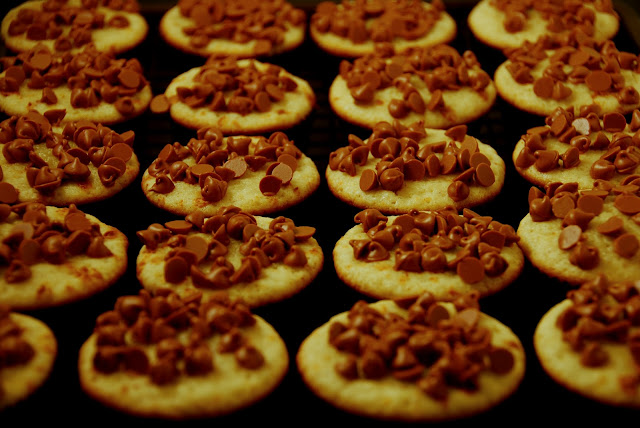 I started out by having my ridiculous 4 year old help dip the cupcakes but she was more interesting in putting cinnamon chips in her mouth and I needed enough for the cupcakes. So I let her have a small handful and I dipped the rest. Good thing because if I had let her at as many as she wanted, I would have had to give equal amounts to my 2 year old and only one cupcake would have gotten dipped in chips. Yeahhh no.

What else is ridiculous? Brown butter. HOLY MOLY why haven't I done this before?? Like I just may never ever use just softened butter ever again. I think everything needs brown butter. And then adding in bourbon? I die. 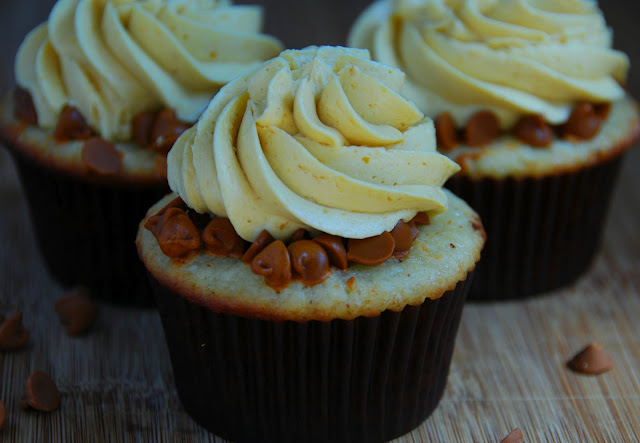 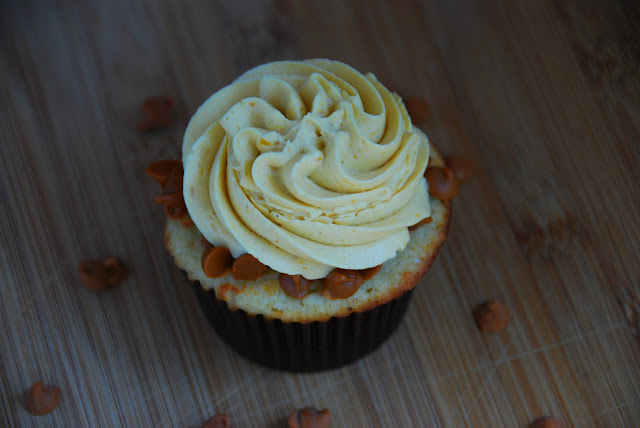 I "adapted" two recipes to make the cupcake and the frosting is my standby swiss meringue buttercream that I tweaked from several recipes online. So many are so similar that I find. Its my go-to icing when I want something a little more buttery and caramelly. I also love using Italian merinuge buttercream, it tends to be a little more marshmallowy. Yes that is a word. These may be my go-to vanilla cupcake. Easily adaptable to many flavors. Dense, moist and the perfect crumb. 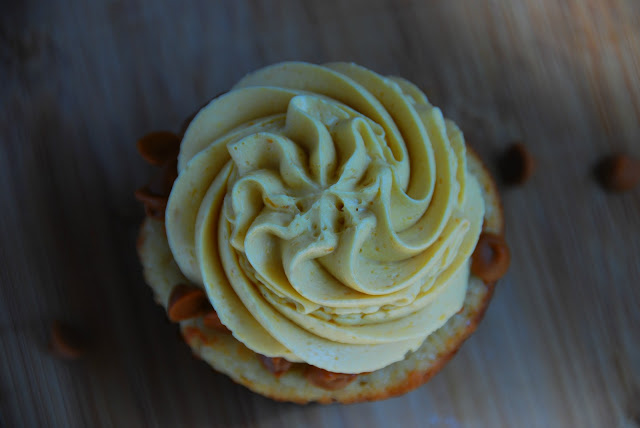 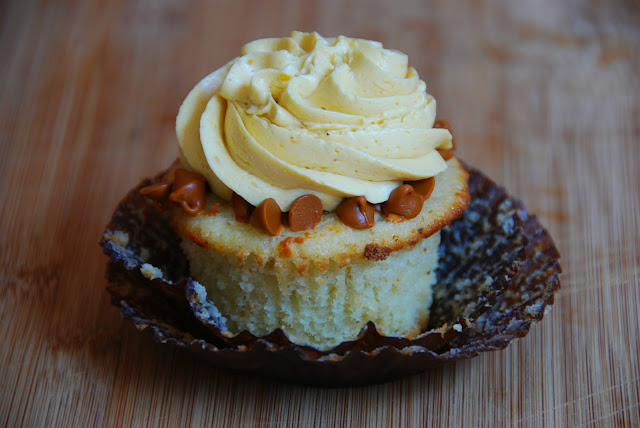 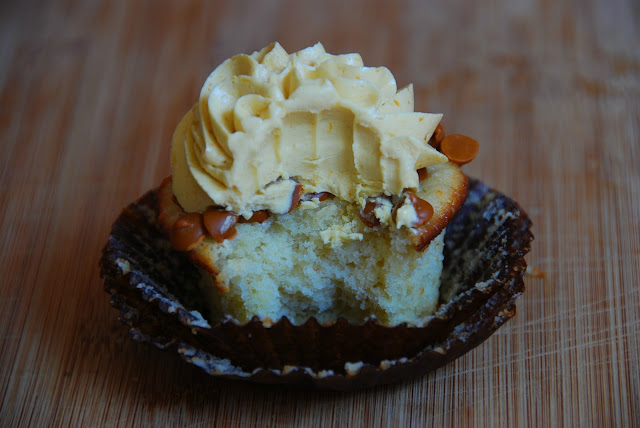 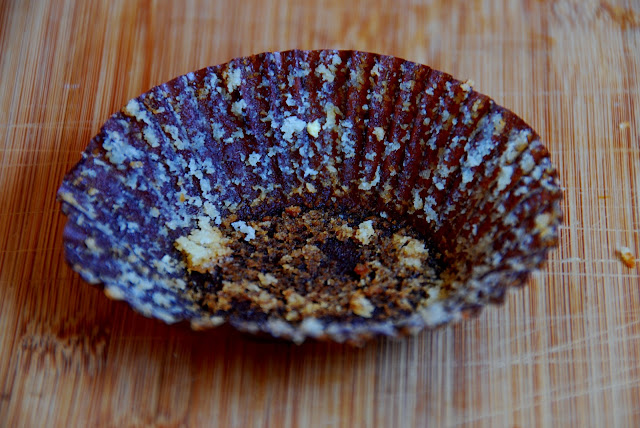 I don't even want to tell you how fast I ate this.

Ingredients for the buttercream

To brown the butter, place sticks of butter in a deep sauce pan over medium heat, stirring frequently, until melted and starting to foam. Watch for brown specks to start to form on bottom of pan and the melted butter has darkened slightly and has a nutty aroma. Remove from heat, transfer to a bowl and cool to room temp. This all takes about 35 min.

In a small bowl sift together the flour, baking powder and salt, set aside.

Combine the milk and sour cream in a cup and mix well.

In bowl of a stand mixer, mix the eggs and sugar together on medium speed until thickened and lighter in color. Add in the cooled brown butter, bourbon and vanilla and mix well.

Fill cupcake pan ¾ way full each cup. Bake for 16-18 min, depending on oven temp (mine runs hot so they’re done at 16 min). Check for doneness by lightly pressing the top of one and see if it bounces back

While cooling 5 minutes, pour the cinnamon chips in a bowl. Dip the tops of each cupcake in the chips, pressing lightly. Let cool completely on a wire cooling rack

In bowl of stand mixer combine the 6 egg whites, salt and sugar. Make sure that there aren't any egg shells or yolk in the whites. Set the bowl over the pan of simmering water, making sure the bowl doesn't touch the water, clip a candy thermometer to the side with the end just submerged in the mixture. Whisk constantly until the mixture reaches 160 degF and remove immediately.

Place the bowl back in the stand mixer and using the whisk attachment slowly bring up the speed to medium high and beat the mixture until the bowl is cool to the touch and has thickened and increased in volume and turned white. This takes about 7-10 min

Once cool, lower the speed to medium, and add in the butter pieces one at a time until all mixed in. It may get soupy looking but that is OK. Once all the butter is mixed in turn the speed up to med-high and whip until you see a change in consistency and hear the mixture making a whipping sound. You will hear a change in the way it sounds – and it will look thicker and fluffier.

Change to the paddle attachment. Add in the vanilla extract and mix on medium until combined. Add the pumpkin puree ¼ c at a time mixing well after each addition. The buttercream shouldn't change consistency with the addition of the pumpkin this is why it is best to add in ¼ c at a time. Stir on low once all the pumpkin is added in to get the air bubbles out. It is now ready to spread or pipe on cupcakes or a cake. Can be stored at room temp if using same day, if not cover tightly and refrigerate until ready to use. Bring to room temp and whip again in mixer to get it back to the right consistency before using.

To finish the cupcakes:

Once cooled, frost with pumpkin buttercream.  These are best eaten at room temperature. These will keep up to a week, stored in the refrigerator. Thaw at room temp 30 min before eating, they are even better the second day! 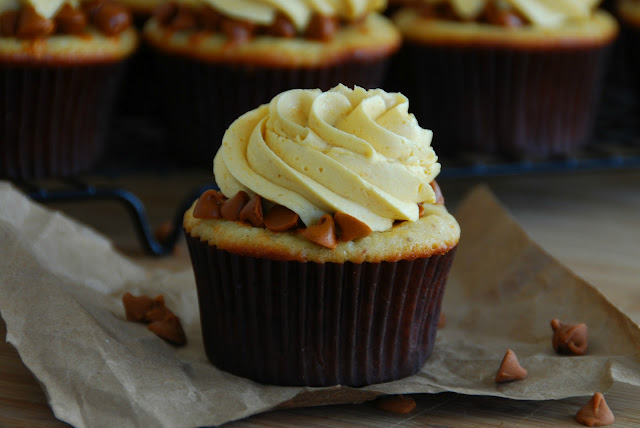