My absolute favorite thing to bake this time of year is cinnamon rolls and I went all out this year with these Caramel Apple Butter Cinnamon Rolls with Apple Cider Cream Cheese Icing. 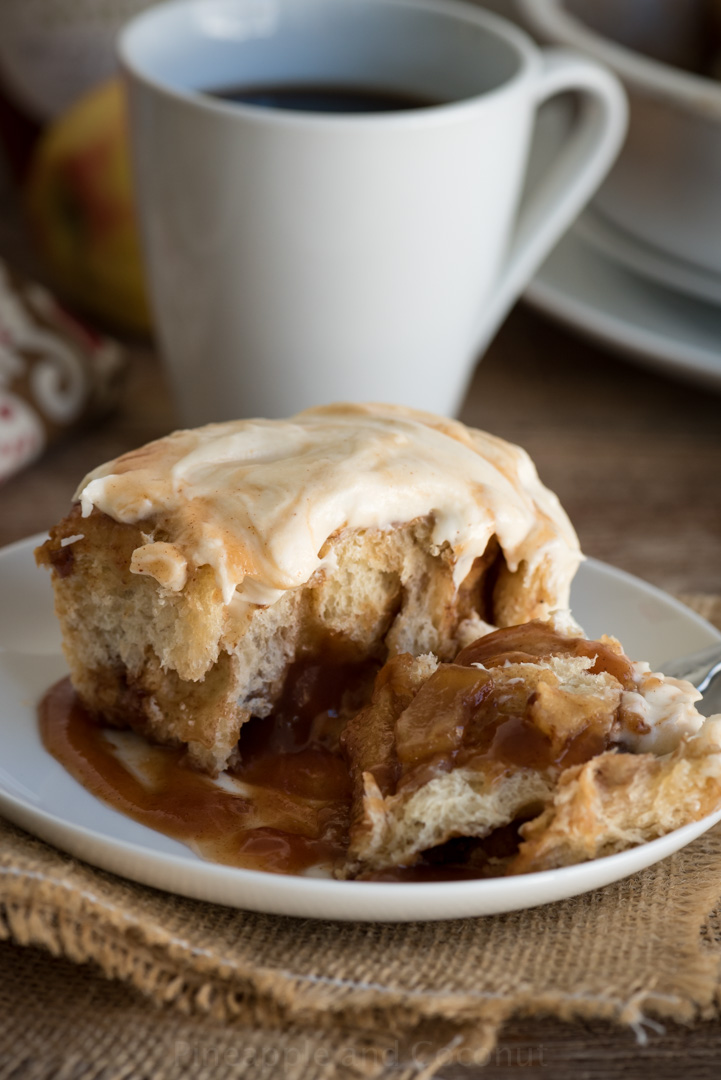 Cinnamon rolls and sweet rolls are most definitely my downfall. I LOVE them. They are so ooey gooey delicious. Perfect for a cold day with a hot cup of coffee. The sugar rush is so worth every last bite. When we lived in Portland, OR, the grocery store near our house, or more like mini mall it was so huge, had a Cinnabon INSIDE the store.

Want to know what torture is? Running to the grocery store for a few items when hungry and the second you step into the store you get blasted in the face with the warm, sugary cinnamony aromas of the freshly baked rolls. Never in my life have I shown such restraint and willpower to not buy a Cinnabon roll every time I went grocery shopping. I was sad and happy at the same time when Cinnabon left the store and they replaced it with a photo center. Odd replacement, but my hips thanked me. Too bad I know how to make cinnamon rolls my to my hips dismay.

These are a bit messier than traditional cinnamon rolls since the apple butter filling is pretty gooey. Work quickly when rolling and slicing the rolls and getting them in the pan to rise before baking. And try not to eat too much of the filling on its own. It's really tempting since it is so good.

This recipe is best made in a stand mixer to be used with the dough hook for kneading the dough. Unless you really want that arm workout, then go for kneading by hand.

Once the dough has mixed place in a lightly oiled bowl, cover with plastic wrap and leave in a warm spot until doubled. You can leave in an oven that has a proofing setting, around 85 deg. This will take about 90 minutes to two hours.

Once the caramel apple butter is spread, sprinkle the brown sugar cinnamon mix evenly over it and then top with the diced apples.

Roll up carefully. One step I forgot to photo was scoring across the top. 16 one inch lines then cut. This will get a little messy since the filling is messy. Work quickly and as you cut each one place into the prepared pans.

Scoop up any filling that fell out in the cutting process and spread back on top of the rolls. Cover these and let them rise until doubled. 45-60 minutes. 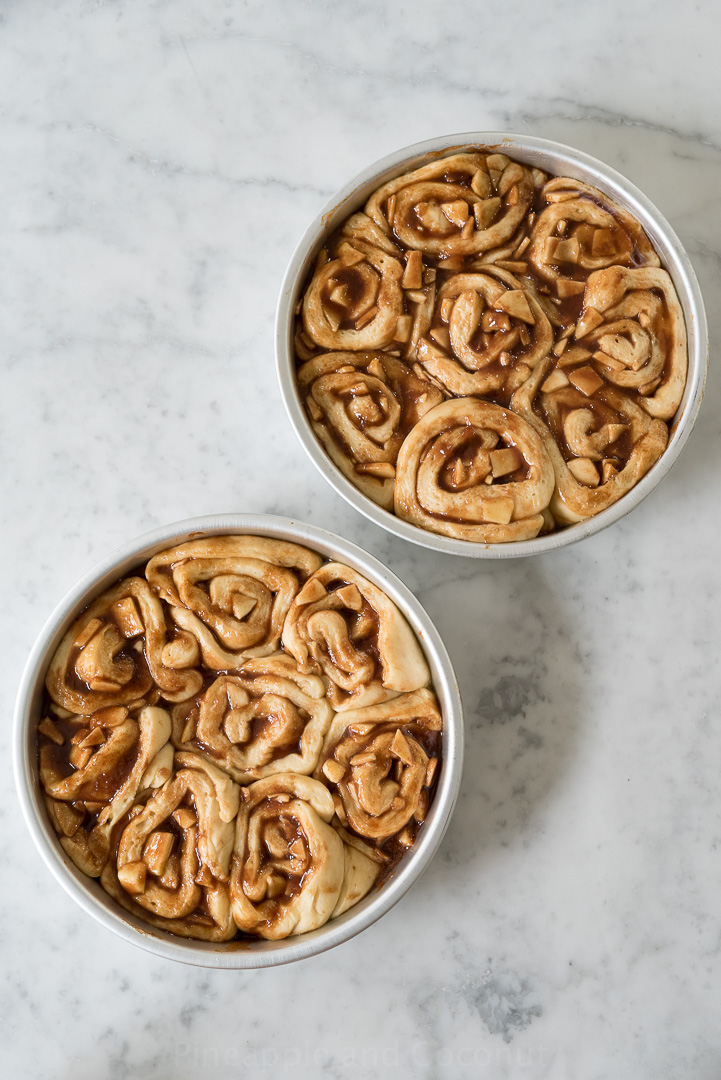 Ready for the oven! And of course another pic I forgot to take, in the pans out of the oven. I am just not that great at the step-by-step photo thing. Baking takes about 20-25 minutes.

I like to ice the cinnamon rolls when still in the pan and let it melt a little into the rolls. You can do this or ice after you remove them. I love the cream cheese icing that goes with these, you can also omit the cream cheese and drizzle with more caramel apple syrup OR go for broke and go with both. These are an indulgence so why not go for it all? 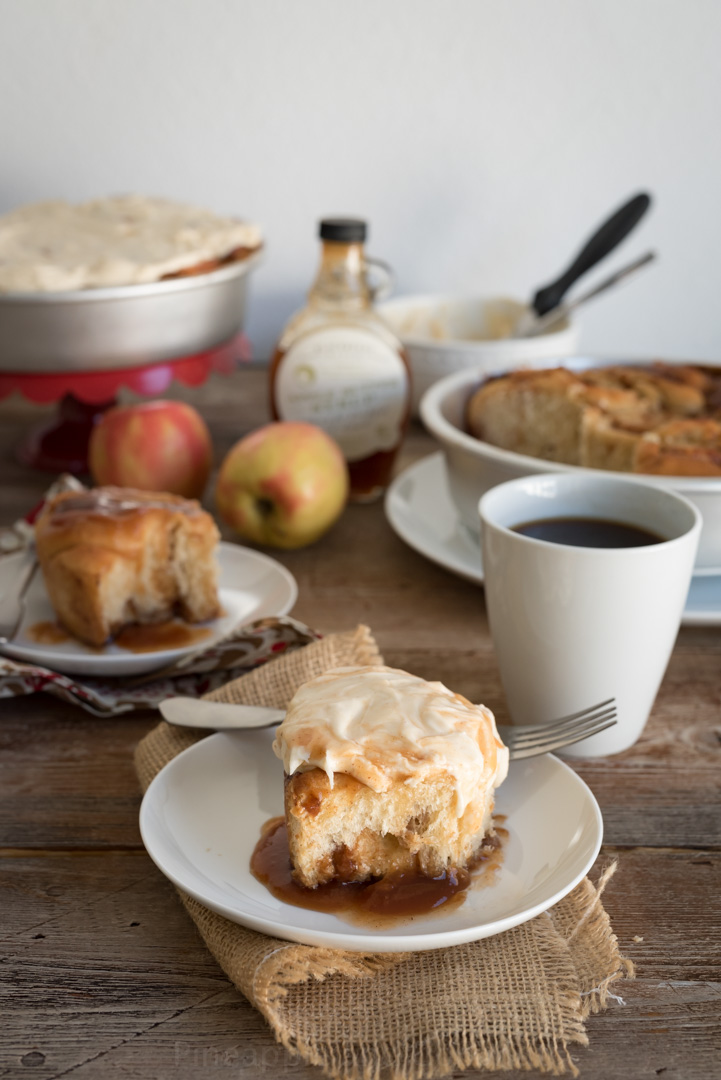 These caramel apple butter cinnamon rolls are pretty awesome on their own with only apple cider syrup poured over the top or go for it and slather with the apple cider cream cheese icing AND a drizzle of the apple cider syrup. These are decadent so don't even think about how many calories they are, just enjoy them.

1. In a small bowl sprinkle the yeast over the warm milk. You can warm the milk in the bowl, make sure its the correct temp, then add the yeast. After 1 minute whisk together then let sit for 5 minutes.

2. In another bowl whisk together the flour, sugar, salt, cinnamon and nutmeg

3. In a bowl of a stand mixer, Combine the eggs, butter and vanilla and whisk together. Place the bowl on the mixer and attached the dough hook. Pour in the milk/yeast mixture and the flour mixture. Turn mixer to low and mix for 10 minutes until the dough has come together and is pulling away from the sides of yet bowl. The dough will be slightly sticky when pressed with a finger but not wet.

4. Sprinkle some flour on a clean countertop or pastry board and spread out with hand. Place the dough in the center and knead a few times, adding a little flour if too sticky. Shape in to a ball then place in a bowl that has been lightly coated with oil ( olive oil or avocado oil works great) then cover with plastic wrap and a towel. Place in a warm spot ( oven set to 85-90 deg if in cooler months of the year, and let rise until a little over double in size. About 90-110 minutes.

5. While rising prepare the filling. Mix together the brown sugar and cinnamon. Spray two 9 inch baking pans, or one 9x13” pan with cooking oil

6. Once the dough has risen, flour the countertop again and punch the dough down once, then remove from bowl and place on counter or pastry board. Lightly dust again with flour and roll to a rectangle of even thickness about 10 x 16”. Let rest for a minute and roll again if the dough shrinks back down at all. Brush the dough with the caramel apple butter leaving about one half inch of the long edge closest to you clear of butter. Or go close to the edges then trim to make a more even rectangle before rolling. After spreading the apple butter sprinkle the brown sugar cinnamon mixture evenly on top of the apple butter. Evenly distribute the apple slices on top of that.

7. Starting with the long edge furthest from you tightly roll up the dough, working along the length of it to make sure it is evenly rolling up and filling isn’t spilling out. All the way to the end then roll with the seam side down. Squeeze the log ever so slightly to make sure it is an even thickness. Score along the top to make 16 rolls about 1” apart to make sure all the rolls are an even thickness then cut quickly, the filling will ooze out a little, and place into the prepared pans. Scoop up any spilled filling and spread over the the tops of the rolls. Cover with plastic wrap then a light bowl and let rise until doubled. About 45-60 minutes.

8. Once they have doubled in size, keep covered while oven is preheating to 350 Deg F.  Remove towel and plastic wrap and bake for 20-25 minutes until risen, starting to turn golden and bubbly. Remove from oven and let cool in pans

9. Make the icing while the rolls are cooling.

10. Beat the butter and cream cheese until fluffy. Add in the powdered sugar one half of a cup at a time, less sugar for a thinner icing, more for thicker.  Then add in the cider, spices and vanilla and beat again.

11. Run a small spatula around all of the rolls to separate them then spread the tops generously with icing. Serve and drizzle more Apple Butter Syrup on top. OR you can omit the cream cheese icing and go with just a drizzle of the apple cider syrup. Its fantastic warmed up then poured on top right before eating. Serve with a cup of coffee and enjoy!

If you roll out the dough to a somewhat uniform rectangle spread the apple butter all the way to the edges. If its a bit uneven, spread it to almost the edges then trim the excess before rolling up the dough.

For a thinner/runnier icing glaze the rolls when warm out of the oven. For a thicker icing wait until they have cooled completely. You can ice then wrap in plastic wrap then foul and freeze up to 1 month. 3 months if kept in an airtight container.

You can also make these up to before raising the rolls the second time and wrap in plastic then an airtight bag then freeze. Thaw in refrigerator overnight for the second proofing, then set out covered with a towel to bring to room temperature before baking.

These really are worth the work. Check recipe notes for tops on making them overnight and freezing if you don't want to eat them all at once.