Valentine's day is just around the corner and what better way to say I love you to your sweetheart than with making them a show stopper Chocolate Raspberry Cake . 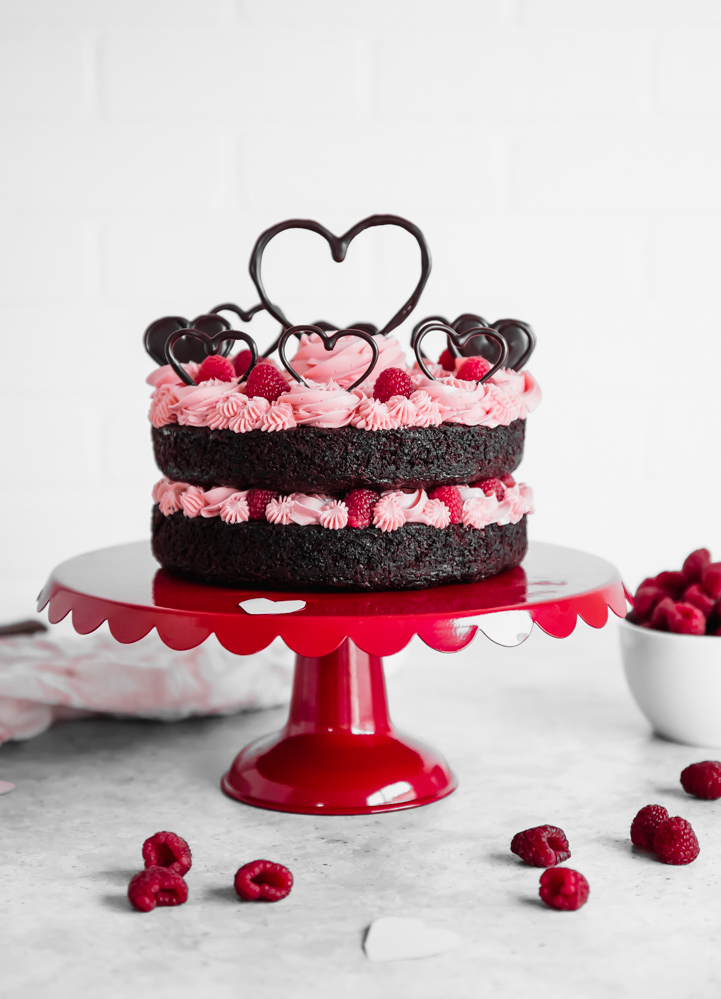 I love making over the top decadent desserts for holidays, especially ones that are all about the sweets, such as Valentine's Day. The day to shower your loved ones with flowers, chocolates and candies. Or a fancy chocolate raspberry cake that really isn't that hard to make.

I don't normally use boxed mixes for cake. This recipe was originally for a post for a brand, but the brand went out of business so their mix is no longer available. I haven't remade the recipe using a from scratch cake recipe, but if you have a recipe from scratch that you would like to use feel free to do so. 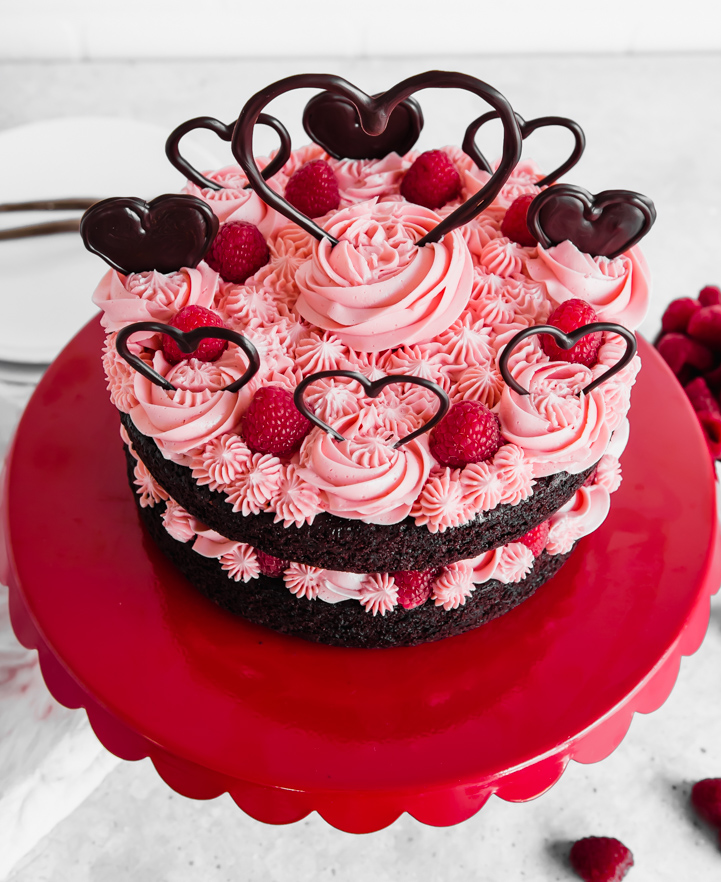 I love making cakes like this one because they are faster to decorate, no waiting for crumb coat then final coat to set. I think they are less intimidating too for the beginner cake decorator. You can find piping tips at a local cake decorating store such as Michael's and JoAnn Crafts.

You can practice on a piece of wax paper before piping on the cake first to get used to the different designs. I used several different sizes of open star tips for this cake, those are the ones that make rose like swirls. 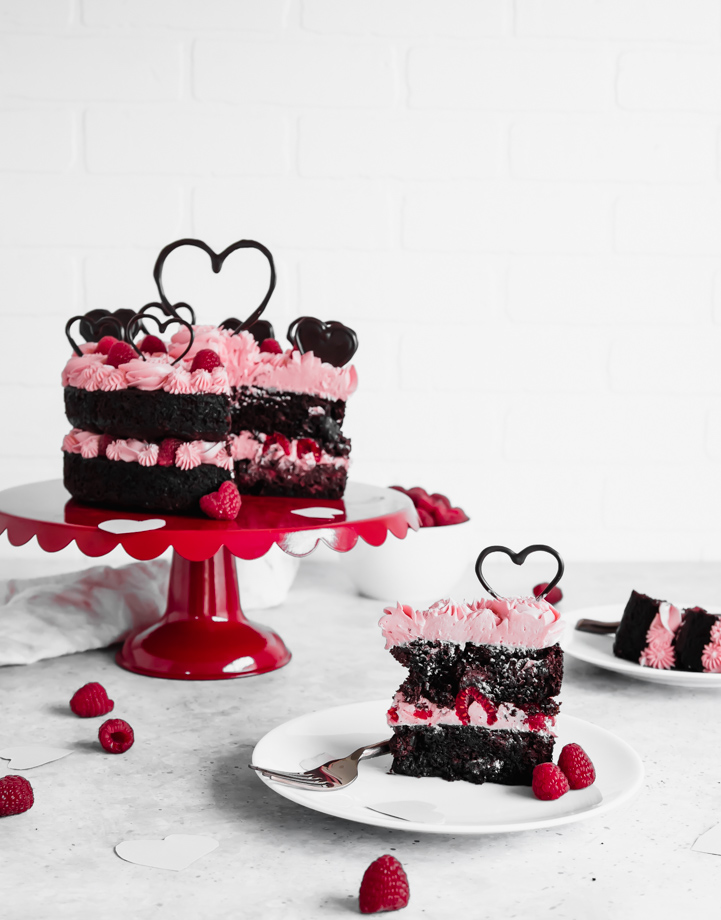 Usually when I make a cake I fill the layers with buttercream and either a curd or a jam. With a "naked cake" or a cake without the sides fully covered in frosting I don't use a jam or a filling that would ooze out. Instead I pressed fresh raspberries into the buttercream. Which is also raspberry flavored. 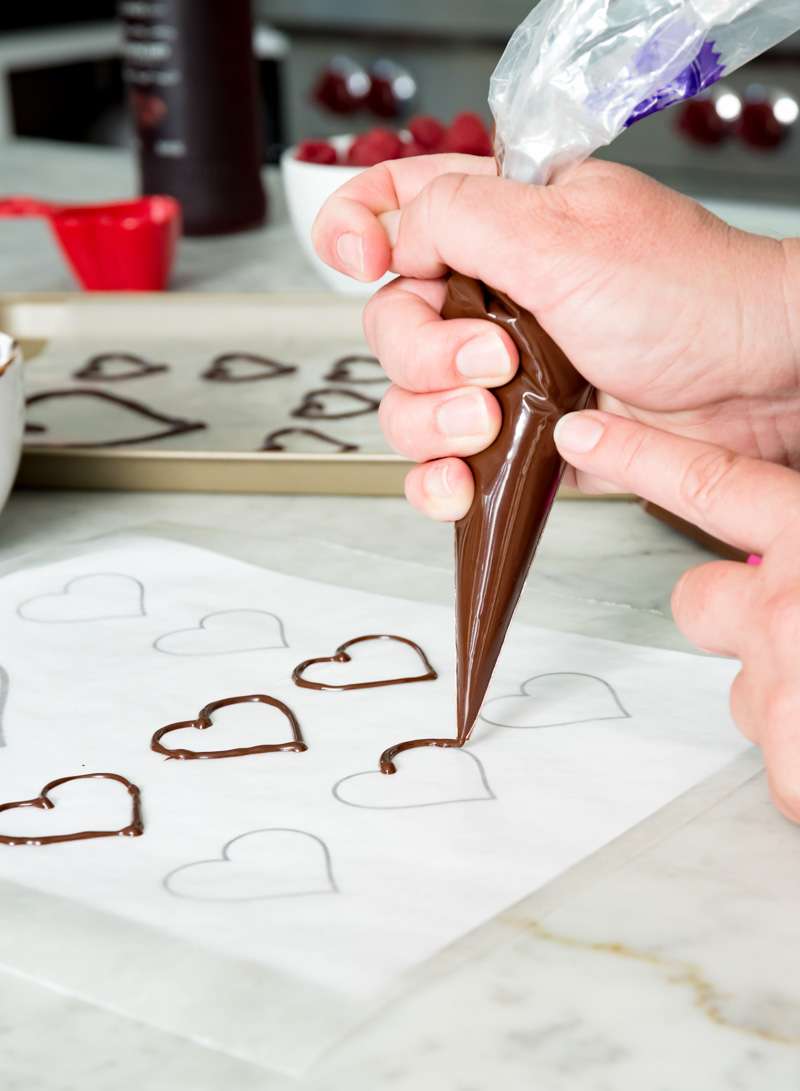 I found a heart clip-art online and copied and pasted it to a blank page then printed it out. Placed a piece of wax paper over the top. Melted chocolate and poured into a piping bag and traced the outline of the hearts with the chocolate. I slid this onto a tray, you could do it all on a tray to skip that step, and froze them until set. They peel off the wax paper easily. They are fragile so make extra in case some break. Some of the hearts I filled in with chocolate and those were a little more sturdy, but I loved the look of just the outline hearts so I put more of those on the cake. 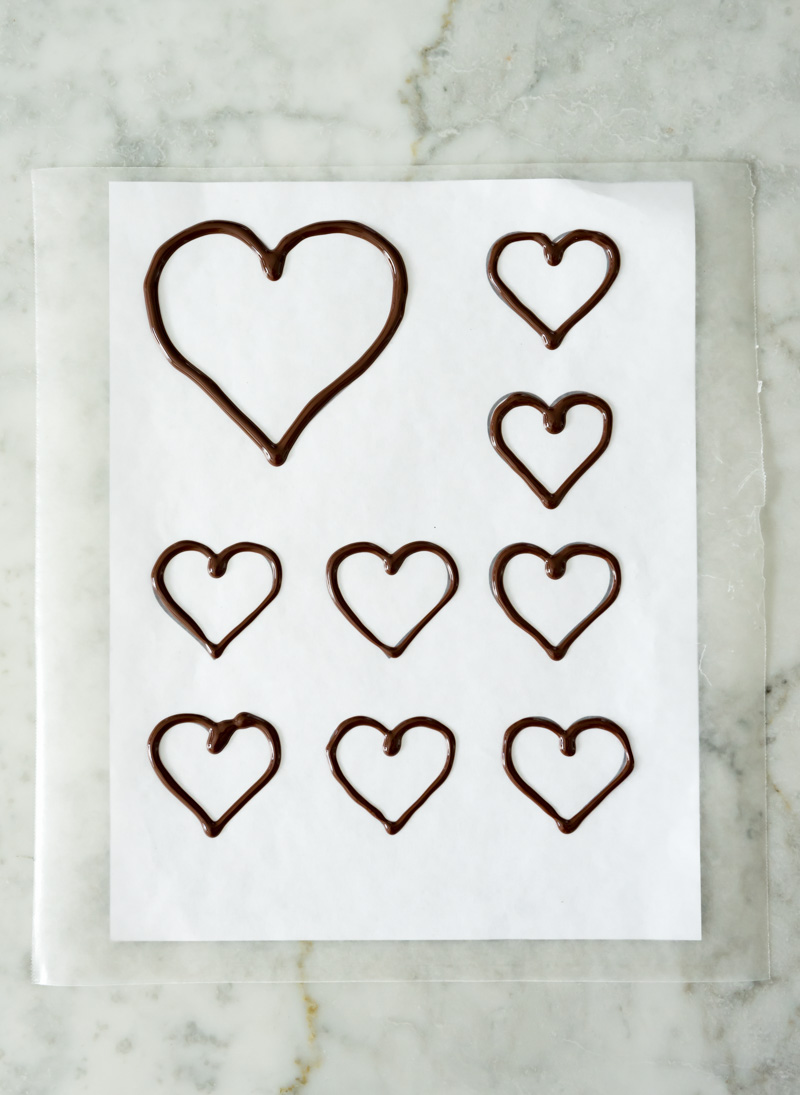 I used the template because I can't draw hearts to save my life. Something so basic, yet mine are always lopsided. If you have better heart drawing skills than I do, feel free to freehand them.

Since I didn't do a completely covered in frosting cake, I had a little fun with piping the raspberry buttercream between the layers and on top. 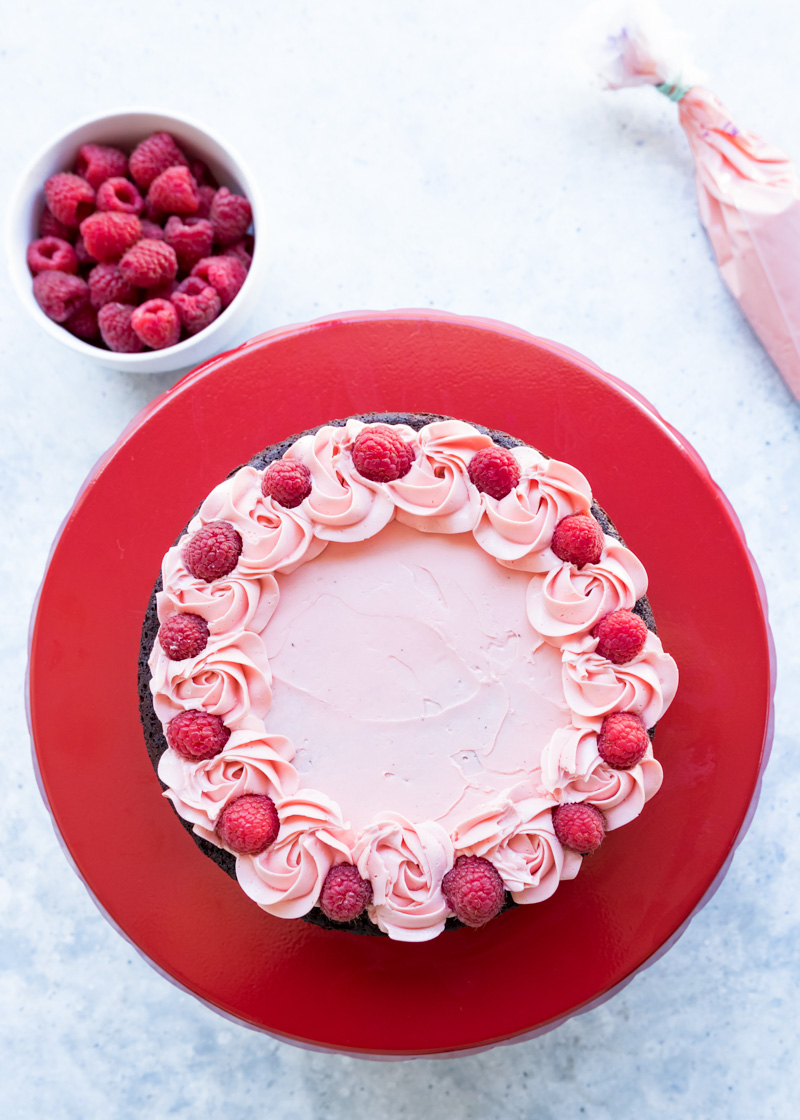 For the middle later I piped larger rosettes and placed raspberries between them so you could see them from the side of the cake. Then I filled in the middle and scattered more fresh raspberries around. Didn't worry about any pattern or design here since it wouldn't be seen. 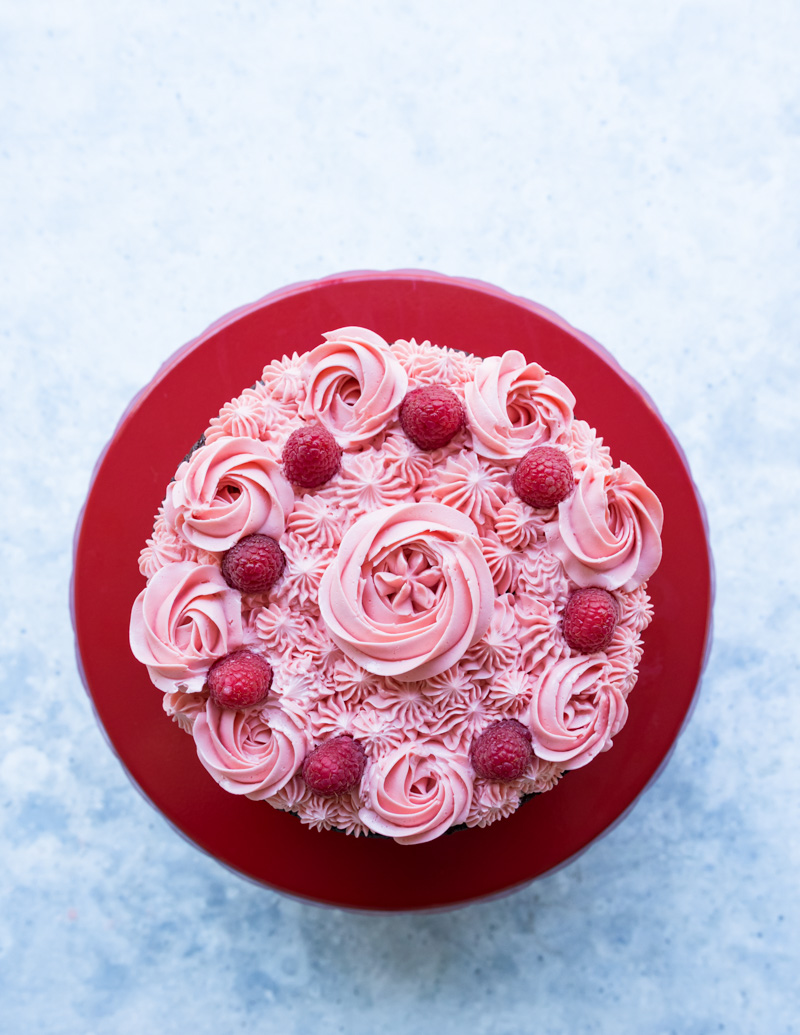 For the top of the cake I used a few different piping tips and sizes of rosettes and drop flowers. You can really do any pattern you want here. It is all up to you! 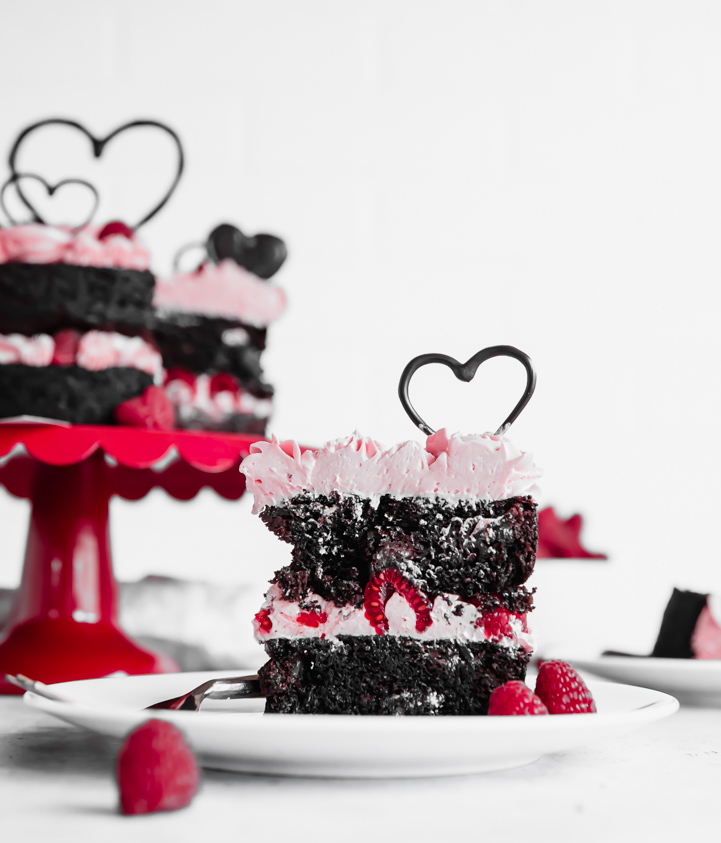 A few notes about the recipe first:

While the cake is cooling make the buttercream :

For the chocolate hearts:

To assemble the cake:

I used an organic chocolate cake mix for this recipe and added in the additional ingredients not according to the package since I decided to enhance this mix to make a richer cake. You can use any cake mix you like, I prefer organic mixes when I am not making a cake from scratch since they have less additives and preservatives.

I originally made this recipe for a brand but the brand has since gone out of business. I have yet to remake this recipe using a from scratch cake recipe, if you have a recipe you would like to use in place of the box mix feel free to do so.