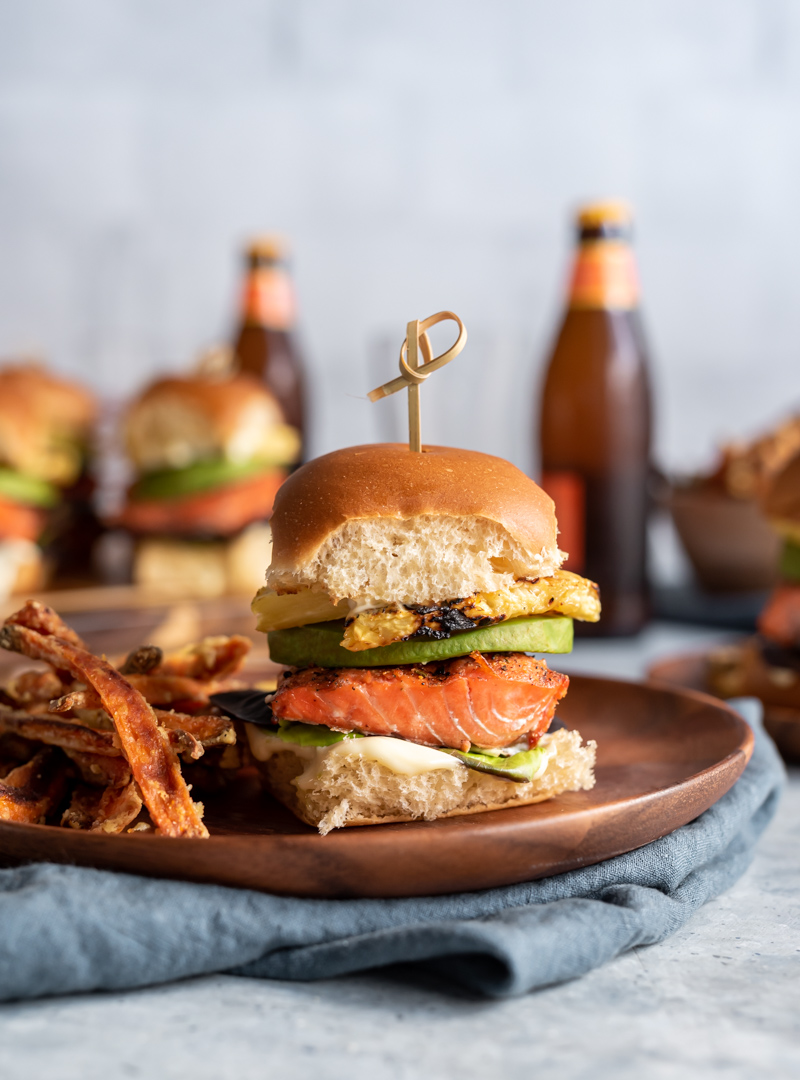 A few years ago I was doing one of those "I don't know what to make for dinner and it's almost dinner time" and decided to scroll instagram to see what my fellow bloggers were making that day. I happened upon several recipes for BLT salmon sliders. They were all so similar I thought maybe they all decided to do the same thing on the same day or it was purely coincidence. Either way, I had salmon, bacon, tomatoes, lettuce and slider buns on hand. So that is what we had and they were AMAZING. We have made them several times since. 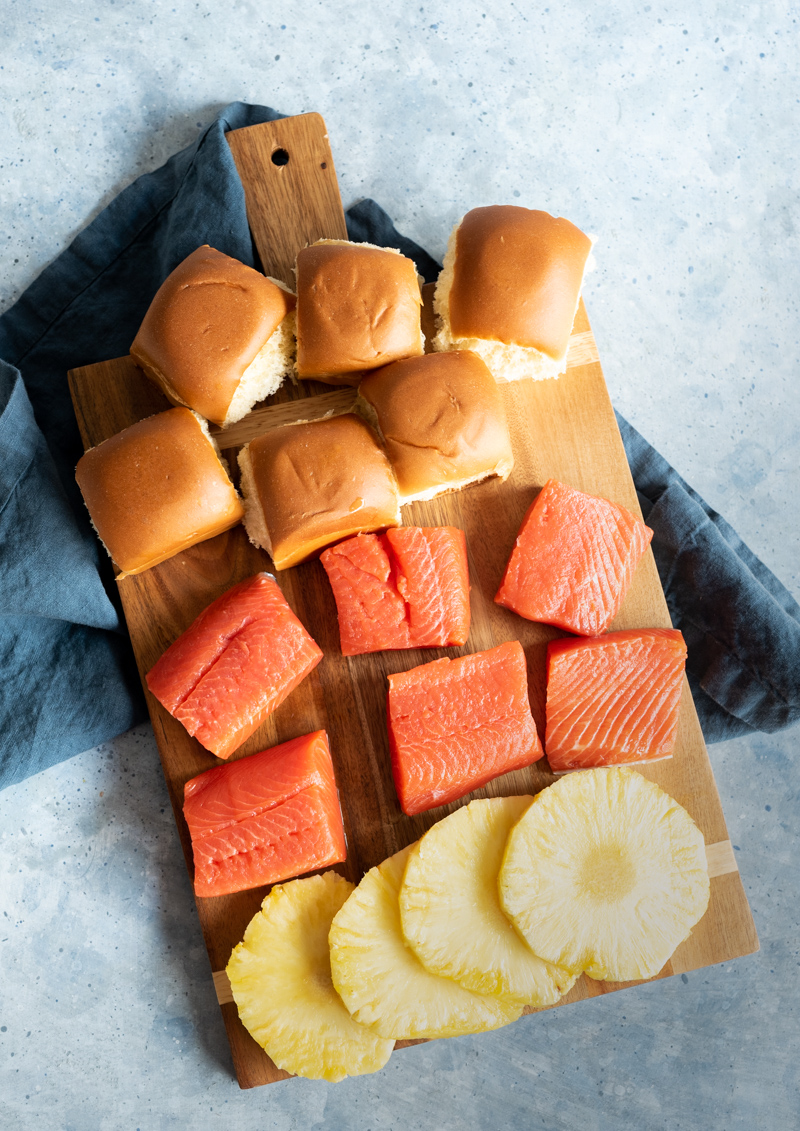 I have been wanting to make a version of salmon sliders for my blog for a while now, and since a ton of bloggers already have the BLT salmon sliders recipe covered, I decided to go with a version that is a little bit spicy and a little bit sweet. I am a huge fan of Jamaican Jerk spice with salmon. It goes great with the mild tasting fish but doesn't over power it. UNLESS you add way too  much of the spice. If you want insanely spicy, knock your socks off and add more spice than I do. I only use a little bit just for flavor, and not to have to drink 5 gallons of water while eating the sliders. I made the mistake once of adding way too much jerk spice and the meal was inedible. The lime mayo for these sliders helps balance out the heat from the jerk spice and adds another awesome layer of flavor. 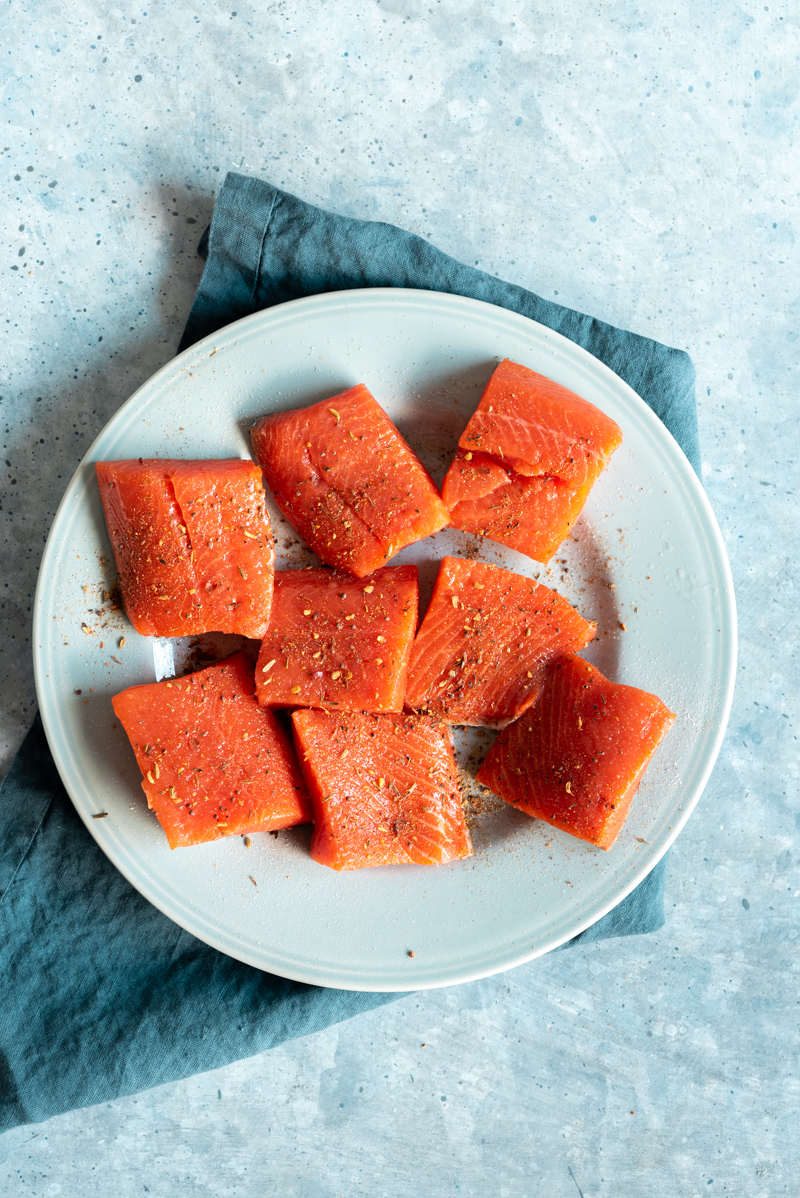 I actually ended up using a little more of the Jamaican jerk spice than seen here. I realized as soon as I was putting them on the grill that I could get away with a little more and it wouldn't set my mouth on fire. If the jerk spice you use doesn't include salt in the ingredient list feel free to add salt as well. 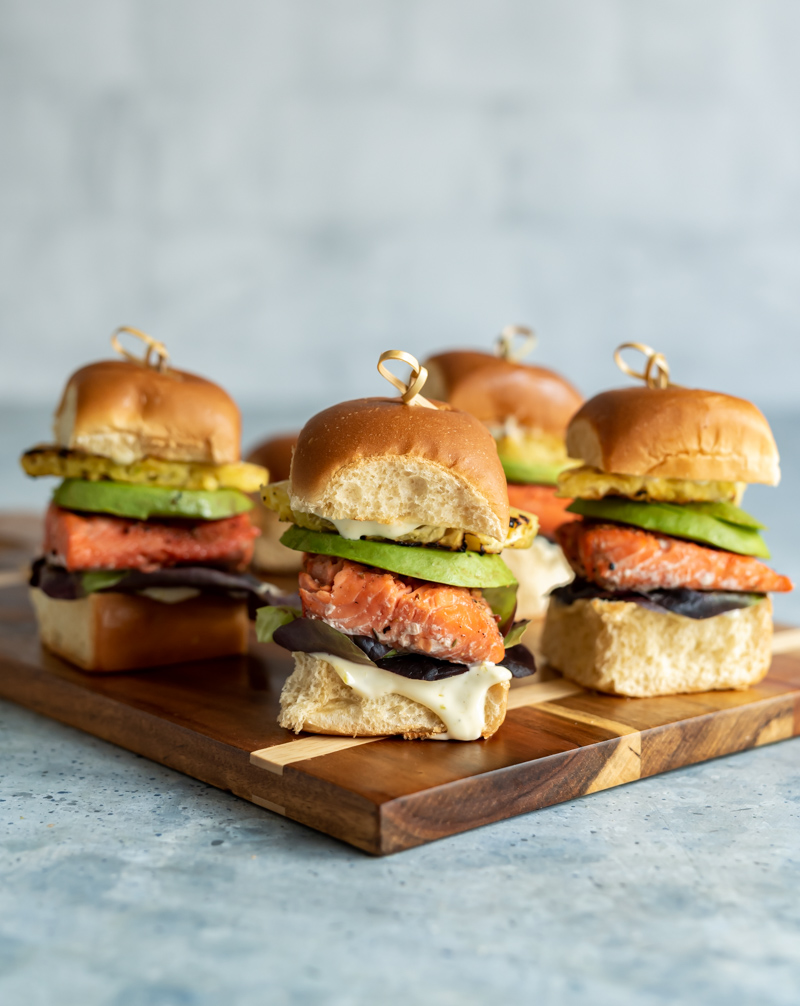 I know I am lucky having kids that like to eat fish and seafood. I think its because its always been something we have eaten. I grew up in a beach town in California so I was introduced to fish and seafood early on as well. I know many adults that don't even like to eat fish and seafood, which, aside from allergies of course, is really too bad. Wild fish, such as Sockeye Salmon, is so healthy and is one of the mildest tasting fish. I get it that the "fishy" odor can be a turn off to many, as well as not being familiar with how to cook it.

Salmon is one of the most versatile fish to cook too. It holds up well with grilling, pan searing, cooking in the oven and poaching. Some fish fall apart much easier when cooking, which can be another reason to not want to make it. Really, it's all about going for it, finding good recipes and practice! 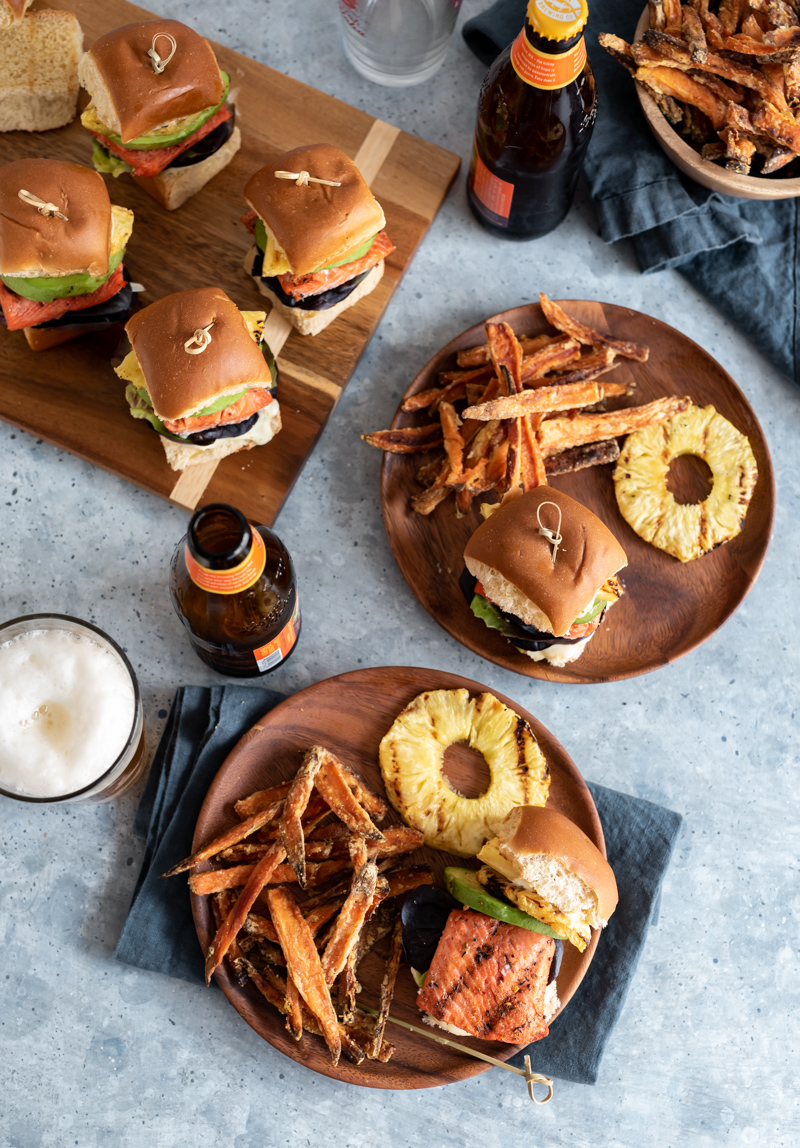 I used Hawaiian rolls for my sliders, we love the sweetness of these rolls as slider buns. They go great with salmon as well as kalua pork. They are a little smaller than traditional slider buns, but not by much. I cut my salmon into 3 ounce portions to fit better on the rolls, as well as slicing the avocado and grilled pineapple slices in half before layering the slider components together. And with burger/sliders you need fries!  I love sweet potato fries.

My trick to getting them crispier in the oven is with some cornstarch. I peel and slice the sweet potatoes into thin sticks then toss in cornstarch before tossing in oil. I season the fries once baked as well.  There are some recipes out there that suggest soaking the fries in water before baking them to help pull some of the starch out, but I haven't found that to make much of a difference. 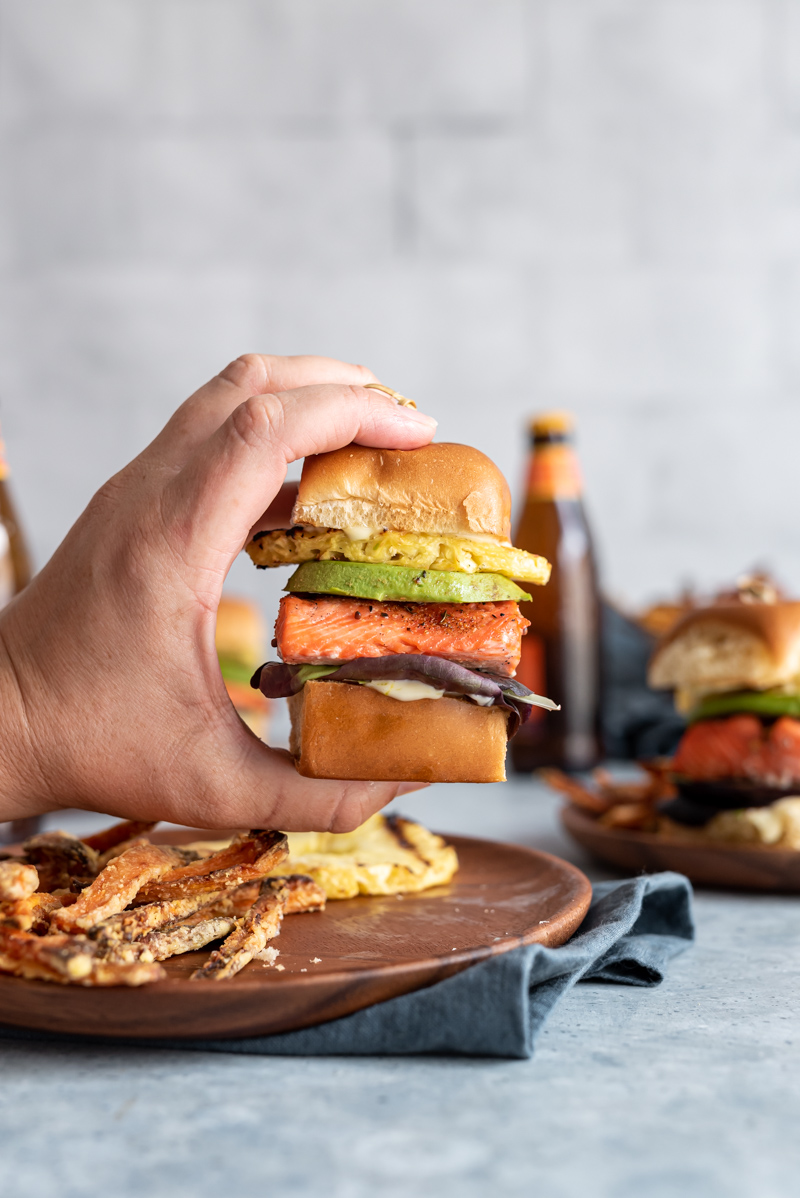 As I was photographing these salmon sliders my 10 year old, who's favorite food is salmon, asked me when I was going to be done so she could eat one. I told her if she could help me with a photo her payment would be a slider and fries. She is now hired as a hand model!

For the Lime mayo

For the Sweet Potato Fries:

Start the sweet potatoes before grilling the salmon.

While the sweet potatoes are cooking prep and grill the salmon and pineapple.

Let the salmon rest while the sweet potatoes are just about done being baked.

Mix together the mayo, lime zest and juice. Generously spread the lime mayo on the bottom roll or bun. Top with several lettuce leaves. Then layer on the salmon, avocado and pineapple. Spread a little more lime mayo on the top bun. Hold together with a long toothpick or cocktail skewer.  Serve with sweet potato fries and cold beer.

I didn’t give an exact measurement of the Jamaican Jerk spice because it its up to you how much you want to use. A little or a lot if you want really spicy. I season just lightly with it since I don’t want it to be so hot my mouth is on fire. I have made the mistake in the past with being way too generous with jerk seasoning and the meal was inedible. Please season according to how mild or hot you would like it.

If the Jerk seasoning you have doesn’t have salt please season your salmon with salt as well as the jerk spice. I add around ¼ teaspoon per 3 ounce salmon piece.

Don’t use canned pineapple. It is way too watery and won’t hold up to grilling very well. 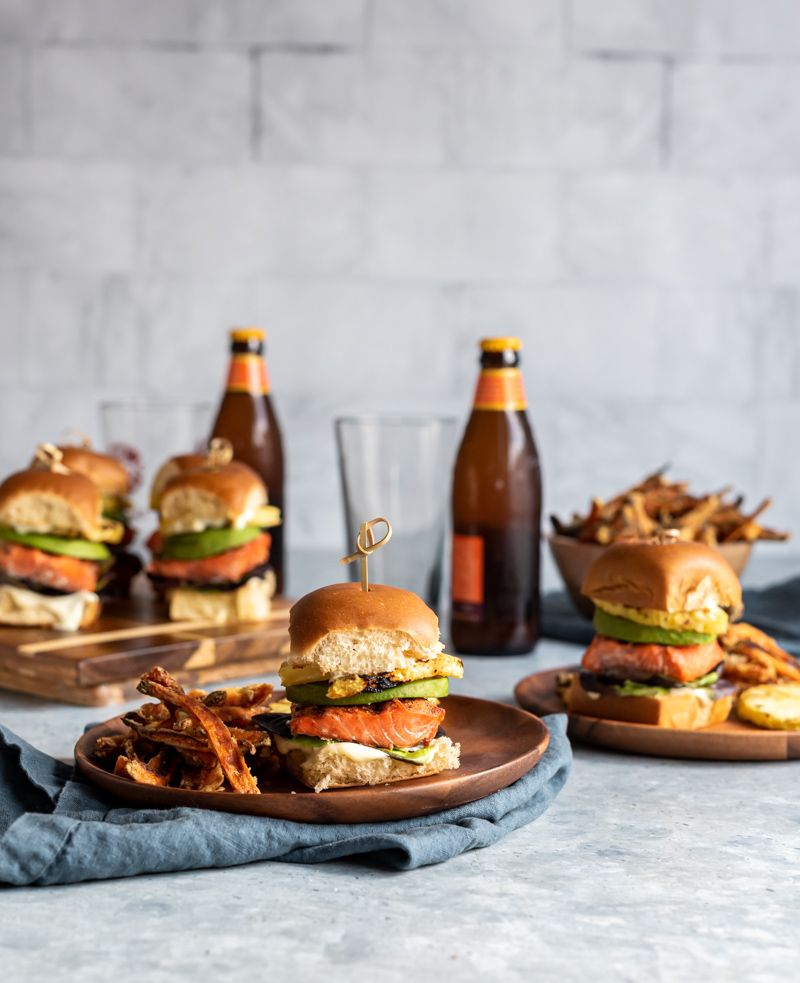 Don't forget to serve the salmon sliders with cold beer!