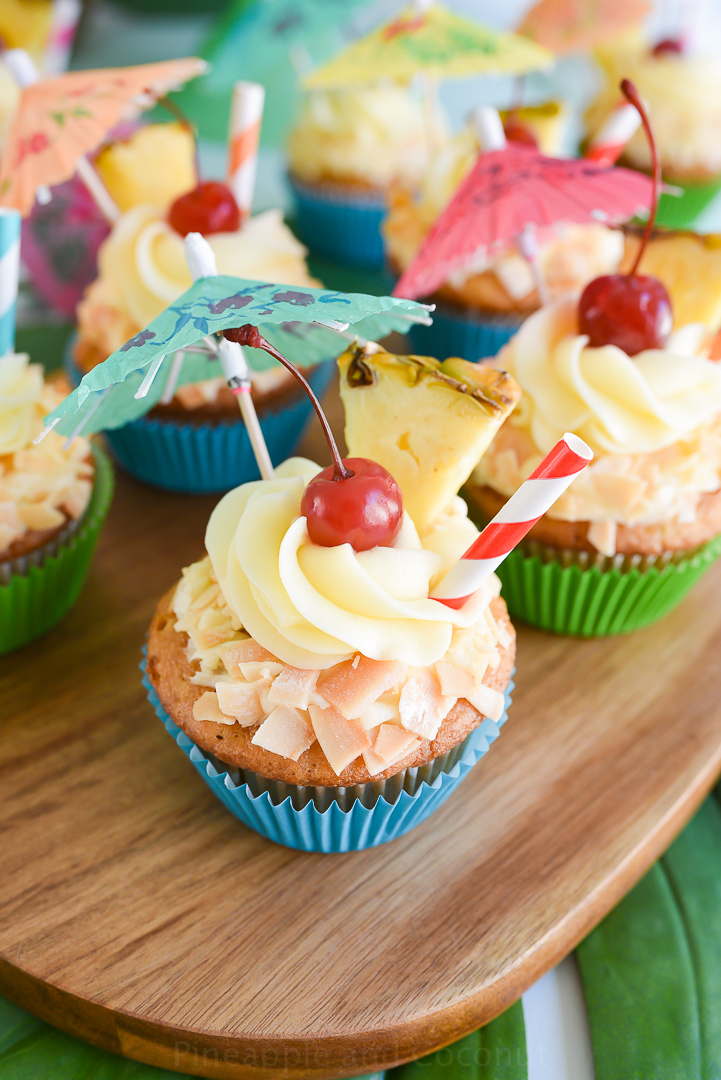 I have such a long list of pineapple and coconut recipes that I want to make. If I did finally make them all I would probably have 4 straight months of recipes.

I space them out a little more than that because I think I would be exhausted making, photographing and posting a recipe a day for 4 months in a row. And I think my family would be sick of pineapple at the end of those four months and we can't have that now can we.

But one of these years I will get my act together and do a pineapple coconut month of recipes! 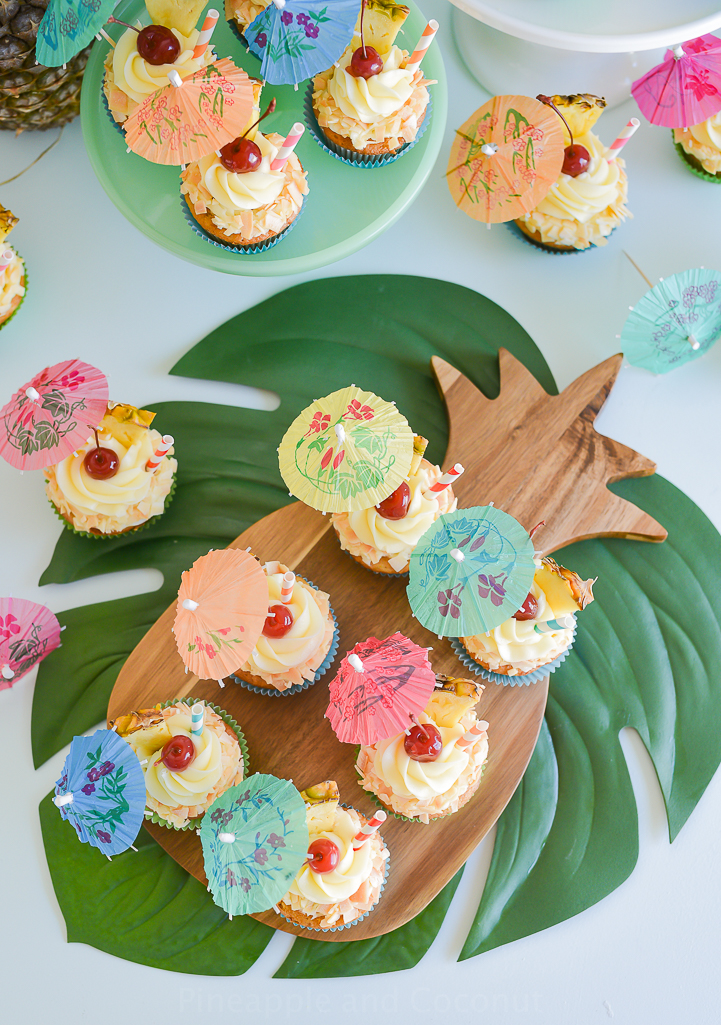 These Pina Colada cupcakes are packed with pineapple and coconut flavors:

Garnishes of toasted coconut and a cherry on top! 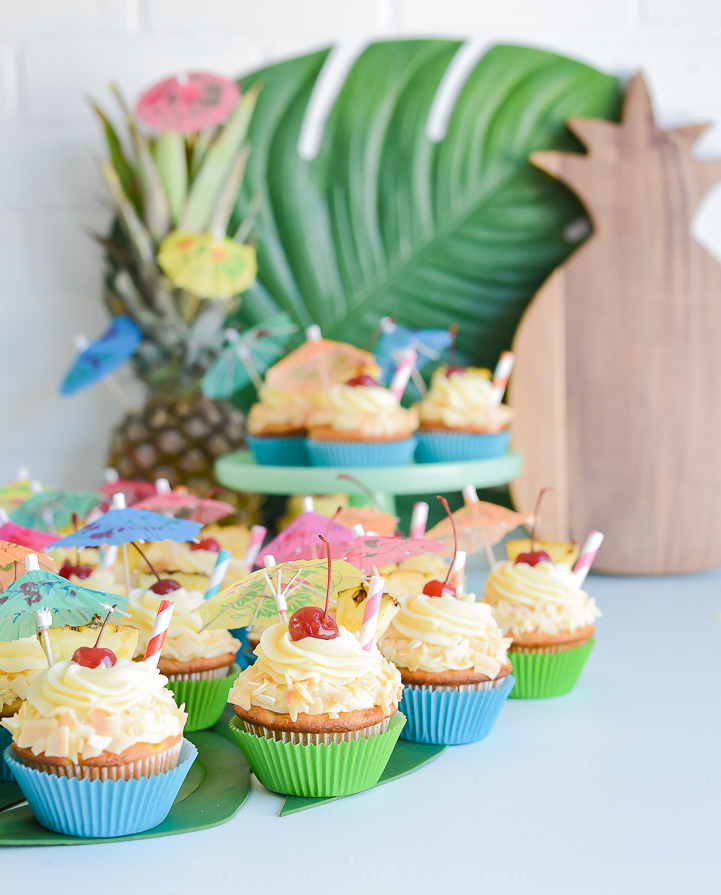 There is coconut rum in the cupcake as well as the frosting.

These aren't overly boozy though and the rum definitely can be omitted to make them non-alcoholic. If you want to make these with less steps you can also omit the filling.

I love filled cupcakes, it adds an extra element of flavor and texture but if you want to skip that step it won't change the texture of the cupcakes at all. 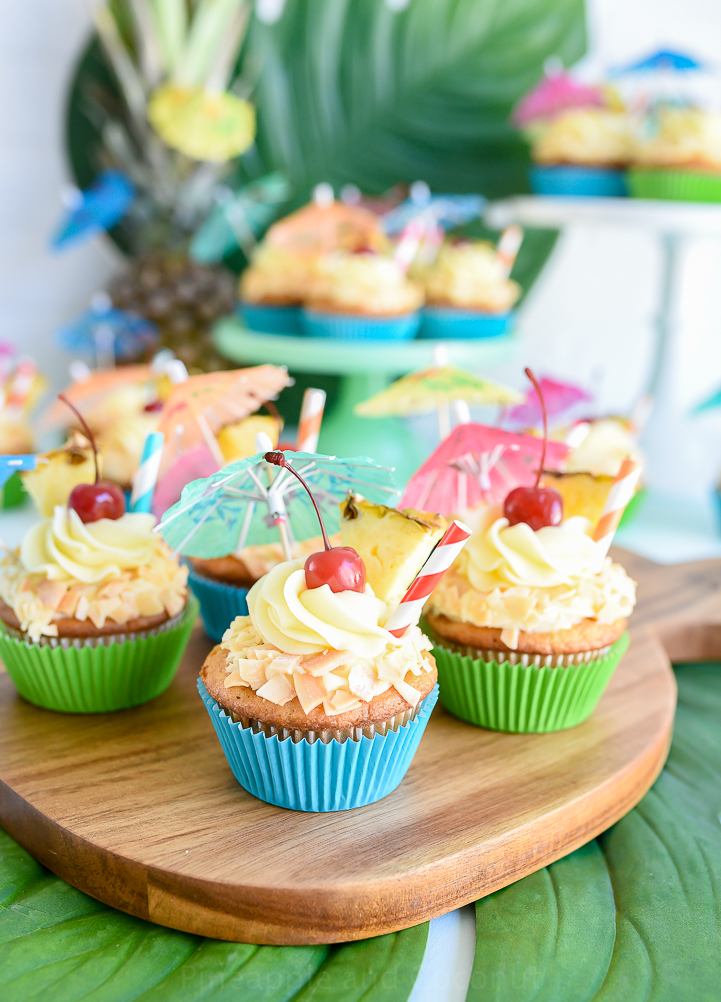 You can make the Haupia filling ahead of time. It has a more pudding like consistency than a haupia bar which has more cornstarch in it which gives it a firmer texture.

The cupcake and buttercream both have a non-alcoholic pina colada mix in them but there is rum added. You can substitute the rum for a little vanilla and coconut extracts

2. In a medium bowl combine the flours, baking powder and soda and salt. Whisk to combine.

3. In a larger bowl cream together the butter, sugar and lime zest. This can be done with a hand mixer or with a stand mixer. Add the eggs in one at a time, mixing well between each addition, then add in the coconut rum and vanilla extract. Sift the flour mixture over the butter mixture and mix until almost combined. Add in the piña colada mix and mix on medium for about 30 seconds. Fold in the crushed pineapple.

4. Divide batter between prepared cupcake pans, ¾ of the way full or a scant ⅓ cup of batter. Bake for 15-17 minutes or until starting to turn golden and top bounces back when pressed lightly. Remove from oven and let cool in pans for 10 minutes then carefully remove to wire racks and cool completely.

1. Bring the coconut milk and pineapple juice to a boil in a medium sauce pan then add in the haupia mix. Lower heat slightly and whisk until thickened. Remove from heat, stir in the rum, transfer to a bowl and chill until firm. The haupia rum filling can be made a day ahead of time.

1. Cream the butter. Add the powdered sugar one half cup at a time until desired sweetness is reached. Add in ¼ cup of the pina colada mix, rum and vanilla extract. Whip again. If the frosting is too runny add in a little more powdered sugar to thicken up. Transfer to a piping bag fit with a large open star tip.

1. Using an apple corer or cupcake corer, remove a section of the cupcakes, and fill with about 1 tablespoon of the haupia filling. This is easiest done with a piping bag or a resealable bag with a corner trimmed off. Cover with a part of the core that was removed. Let chill in an airtight container for an hour

2. Crush the coconut chips in a shallow bowl. Pipe a circle of frosting around the edge then press into the chips. Pipe frosting around the cupcake leaving the coconut showing, about 2-3 more swirls. Press a maraschino cherry on top, a pineapple wedge, a short section of paper straw then the cocktail umbrella. Keep chilled until ready to use. If the pineapple wedge doesn’t press in easily use a knife to cut a small slit then press in the wedge.

The rum is completely optional, you can omit it and not have to replace it with anything else or you can replace with a little more vanilla extract. 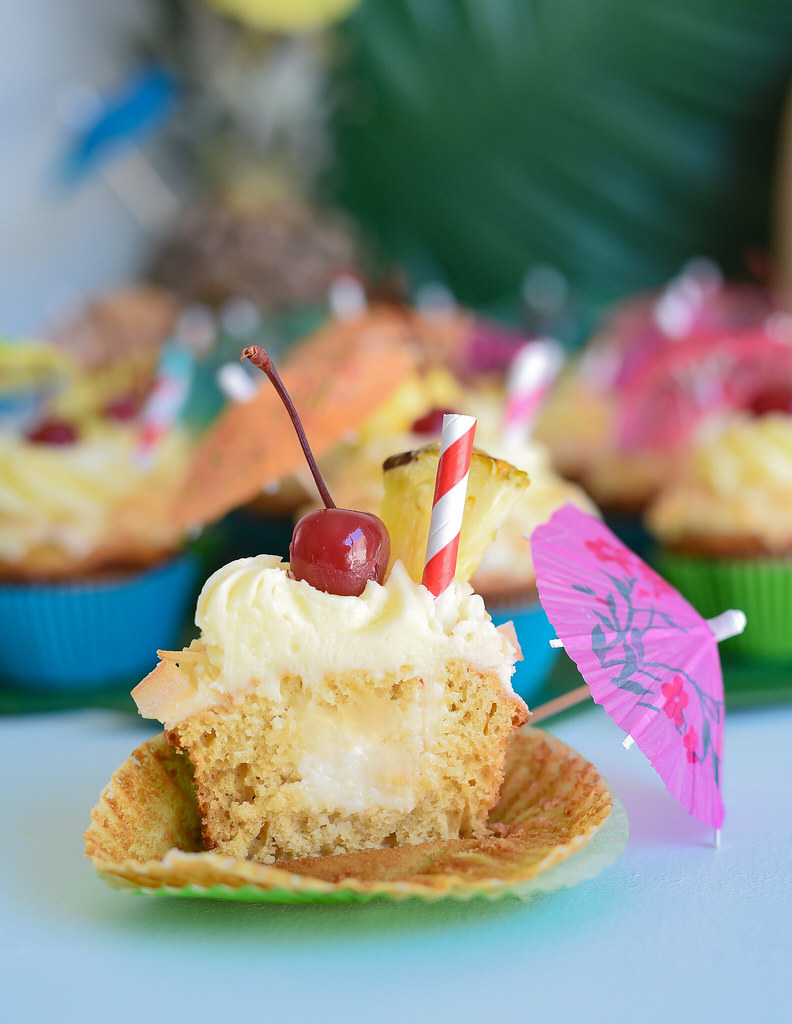