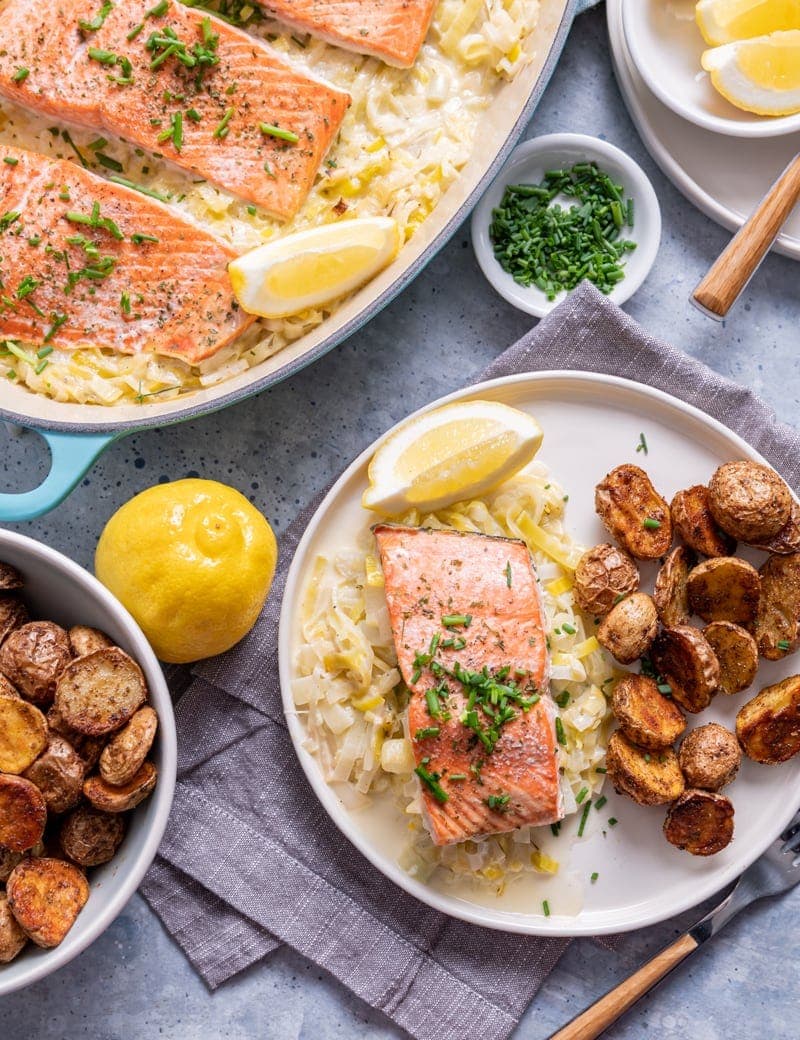 Leeks are one of my favorite vegetables to cook with and eat. They are so versatile. Creamed leeks is a classic French dish and is commonly served with steamed or baked fish. I happened to come across some really big leeks at the store that I knew would be perfect for this dish. I also had a gorgeous two pound fillet of Sockeye salmon from Copper River salmon left in my freezer and I knew it would go amazing with the leeks.

Add in some baby, creamer potatoes roasted in olive oil and one of my favorite seasonings and you have a perfect meal that comes together in under an hour. Most of the work is hands off. 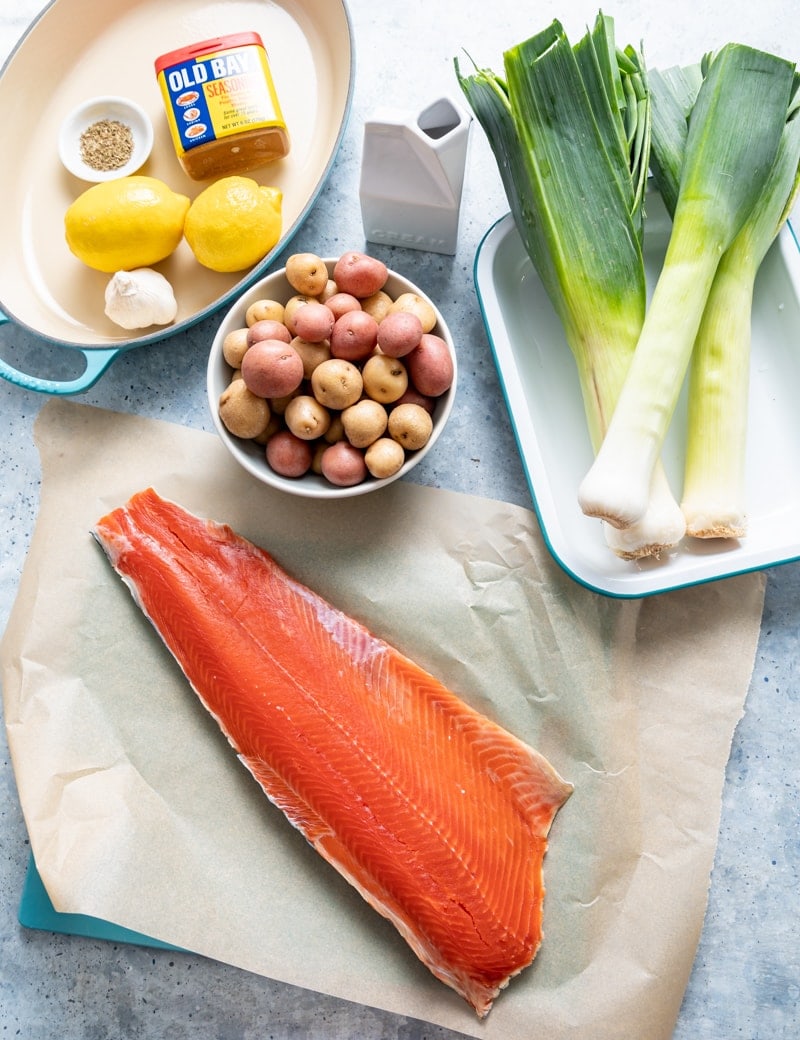 This recipe comes together pretty quickly. I love roasting baby creamer potatoes to go with many meals. These potatoes are seasoned with one of my favorite spices, Old Bay, it reminds me of many seafood dishes. Alongside the creamy leeks it has a hint of a chowder recipe. We love chowders in my house, and this recipe is a sort of deconstructed chowder in a way. 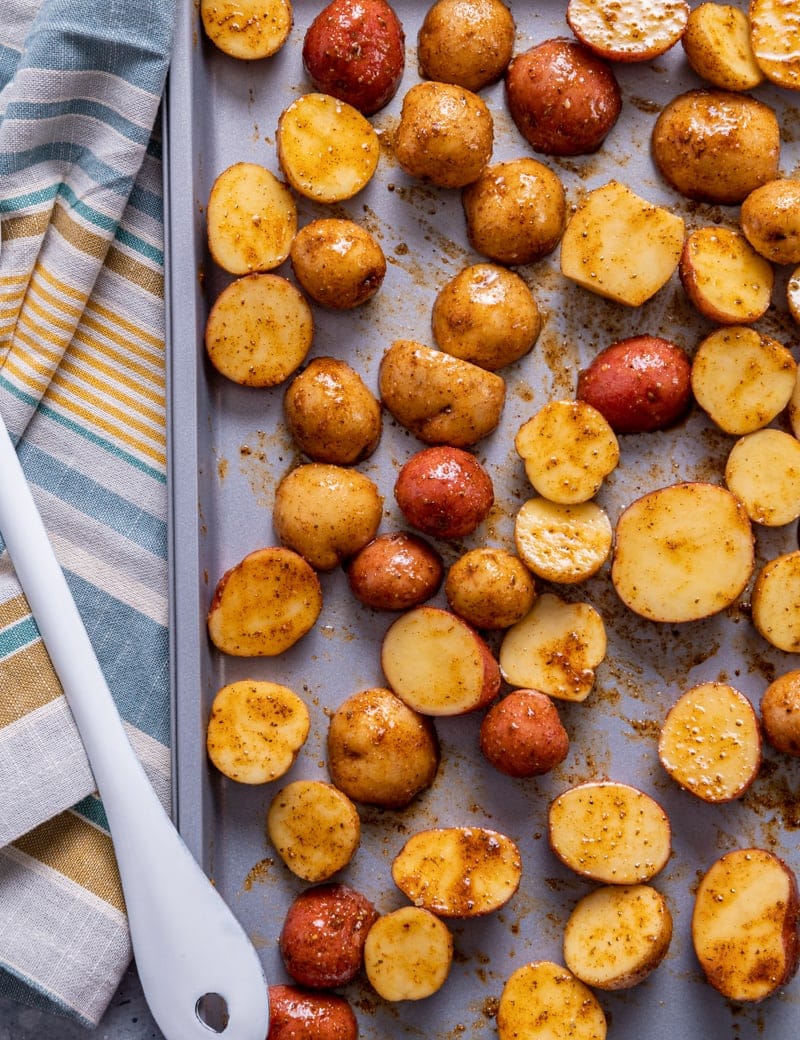 The potatoes go in the oven first since they roast for 30 minutes before the leeks and salmon are added. I check on these every 10 min to stir, flip, make sure they’re not sticking to the pan. Slow roasting is the key to getting these crispy. 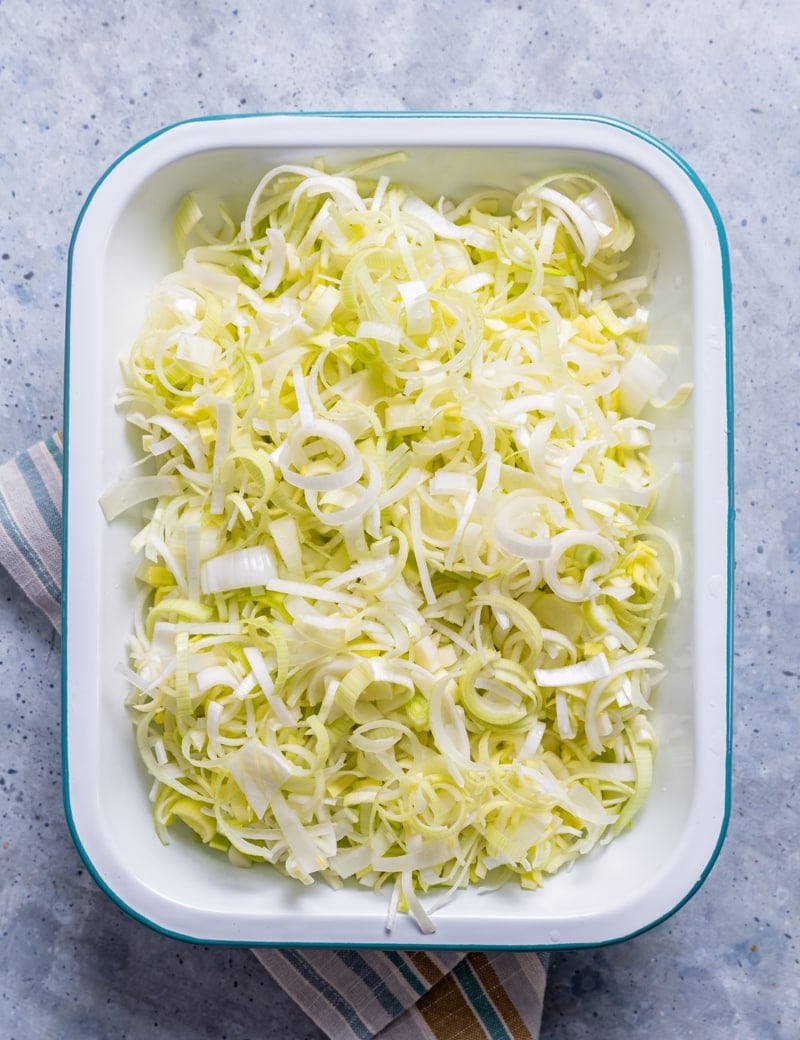 Leeks are amazing to work with, a mild onion flavor. My trick to cleaning them well since they are so full of sand and grit is to slice them thin first, usually halve or quarter lengthwise, then slice and place in a bowl, fill with water and shake around with my hand. Strain and repeat a few times until no sand or grit is left. The store has had some massive leeks lately which have been perfect for roasting or making into creamed leeks since they are cooked down until super soft. I go for thinner leeks if they aren’t going to be cooked as long. 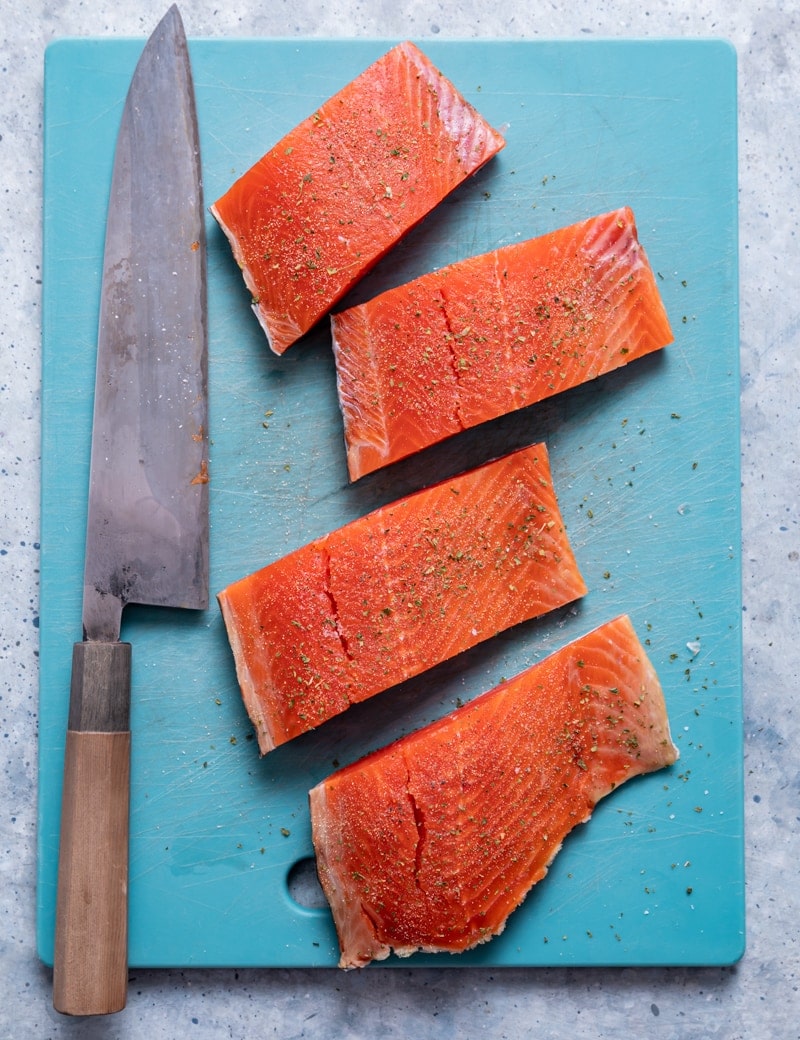 I only lightly season the salmon for this recipe since I don’t want any flavors competing with each other. The salmon gets baked in the oven on top of the leeks. If you want to remove the skin before baking you can slice it off very carefully. I leave it on. It’s up to you what you want to do. You can always remove the skin after baking. 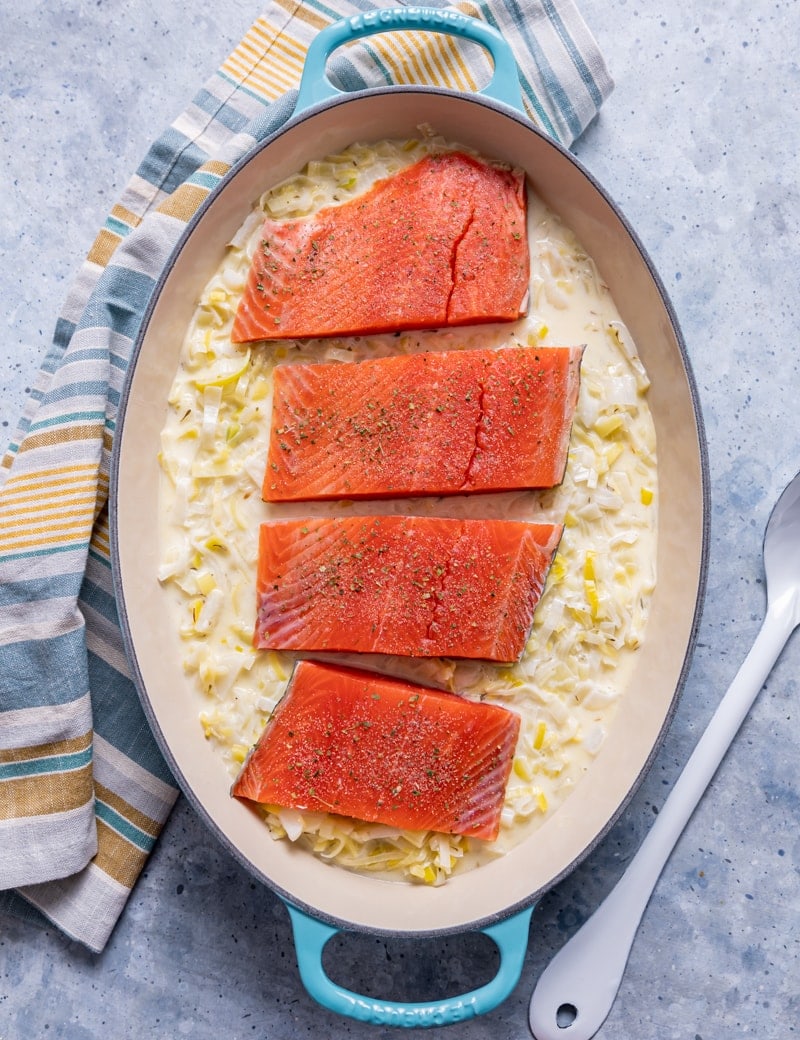 The leeks are cooked down until soft. The key is to let them cook down while only stirring occasionally.  Once the leeks are close to being done, place the salmon on top and bake until the salmon is just cooked through, flakes with a fork. About 8 to 10 minutes. The key here is to just bake the salmon. You don’t want to over bake it.

The potatoes have been roasting this whole time. I will move the tray of potatoes from the middle rack to the top and place the salmon and leeks in the middle of the oven. 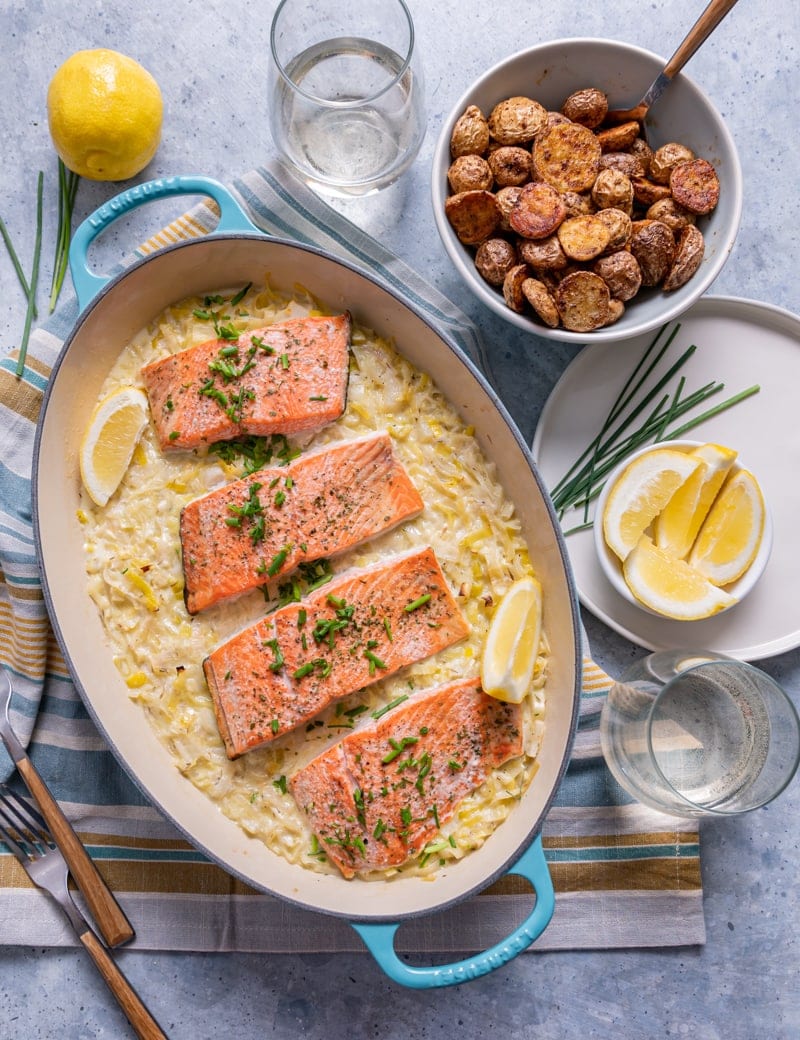 One the salmon is baked, the cream soaks into the leeks and the potatoes are perfectly crispy. Serve with chopped fresh chives and lemon wedges.

Wash and cut the potatoes in half if on the bigger size, keep smaller ones whole. Toss with olive oil and generously season with Old Bay. Scatter the potatoes on a baking sheet and place in the middle rack of your oven. These will roast for 30 min before adding the salmon and leeks to the oven. Check every 10 minutes stirring, turning occasionally. These will roast for another 10 minutes with the salmon and leeks in the oven.

In a large cast iron pan, or other large oven safe pan, heat the butter and oil together then add in the washed and diced leeks. Stir occasionally until they are beginning to wilt and reduce in size about 6-7 minutes. You really don't want to stir them too much. Add in the cider vinegar, salt, pepper, thyme, white wine and lemon juice. Stir occasionally for another 6-7 minutes, until the liquid reduces and the leeks soften even more.

While the leeks are cooking, season the salmon fillets.

When the leeks are very soft and have been cooking for about 20-25 minutes, stir in the cream. You can use just one-fourth of a cup or a little more if you want even creamier. Taste and season with more salt, pepper or lemon juice and stir for another minute or two. Move the tray of potatoes to the top oven rack. Place the salmon fillets on top of the leeks and put the pan in the oven on the middle rack. Bake for 8-10 minutes until the salmon is just starting to flake. You don’t want to over cook the salmon.

Remove the pan with the salmon and leeks and the sheet pan with the potatoes from the oven. Let cool slightly. Divide the leek mixture amongst plates, add potatoes on the side.

*To quickly wash the leeks, cut the tops and bottoms off, only use the white and light green parts. Cut in half or quarters lengthwise depending on thickness of leeks. Slice into 1/4" inch thick slices and place in a strainer set into a large bowl. Fill with cold water and swish around the leeks with your hand. Drain and repeat a few times until there is no more grit or sand left. Drain fully to get rid of as much water as you can. This only takes a few minutes to do. 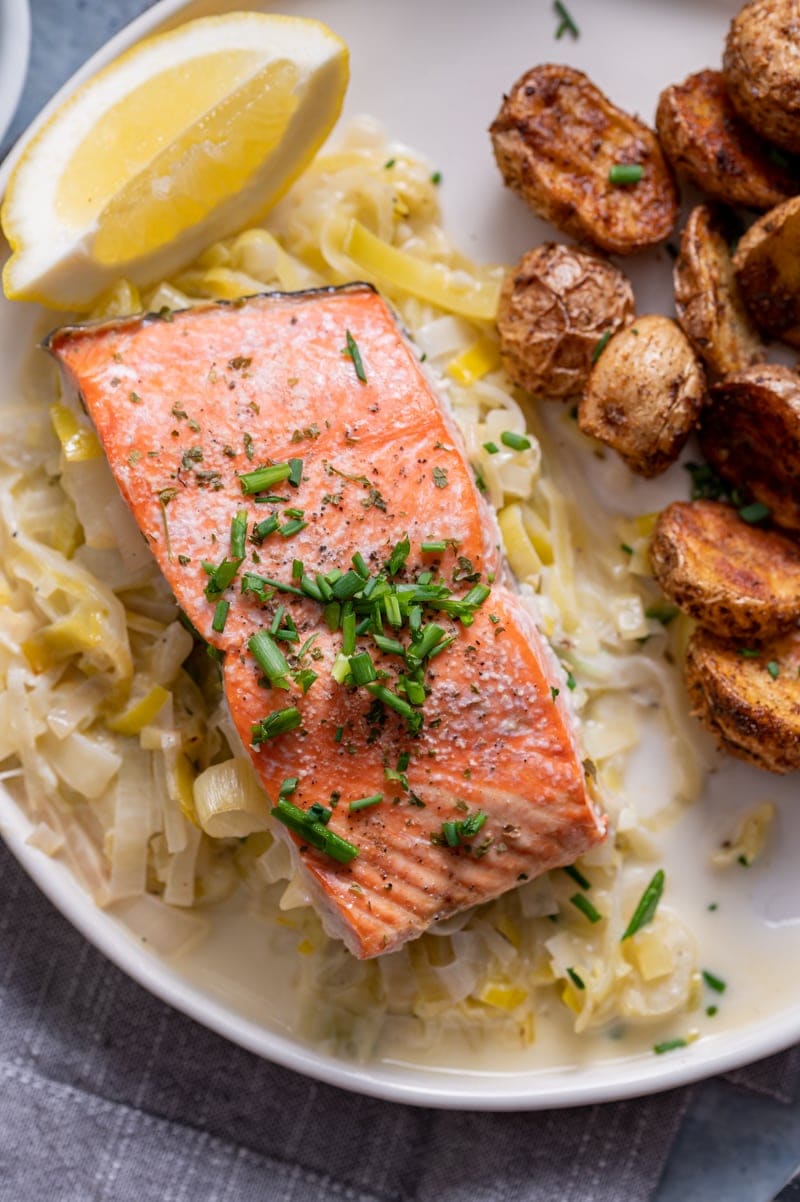 Sockeye Salmon and Creamed Leeks with Roasted Old Bay Potatoes is a simple yet flavorful meal that is ready in under an hour. I usually make this on the weekend when I have a little more time to cook.