100 degrees still in September and I baked cookies. Because these delicious toasted coconut chocolate chip cookies made having my oven on while it's still sweltering outside so worth it. 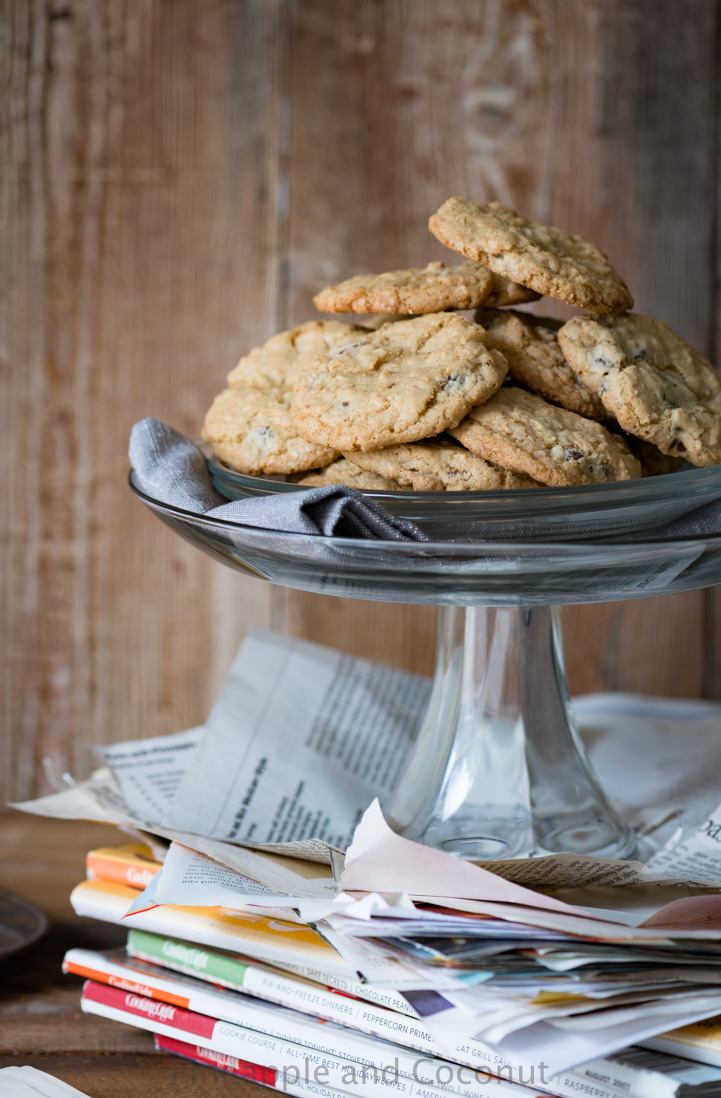 Have you ever watched the show "Hoarders"?  I have, once, and the mere thought of "what if they moved and had to pack up all that stuff" had me practically break out into a cold sweat because I hate packing, and moving, and apparently I hate unpacking too.

The one time watching that show made me realize how many boxes I still have in every room of my house that we haven't unpacked yet and we have been in our house, ummm, two years now. I think it was a scene from "The Incredibles" where the Elastigirl said something about how they weren't allowed to move until the very last box was unpacked and when she told her husband, Mr Incredible,  "Honey I finally unpacked the last box" and he told her they had to move again.

Maybe that is why I am dragging my heels with unpacking. Because I hate moving.  Except I can't seem to find a lot of stuff so recently I set a goal of unpacking a few boxes every weekend.

We aren't moving anytime soon, but with working on so many house remodel/redecorating projects we haven't done much unpacking and wont until it is all finished. Especially since storage in our house is slim and we want to create more storage as we remodel. 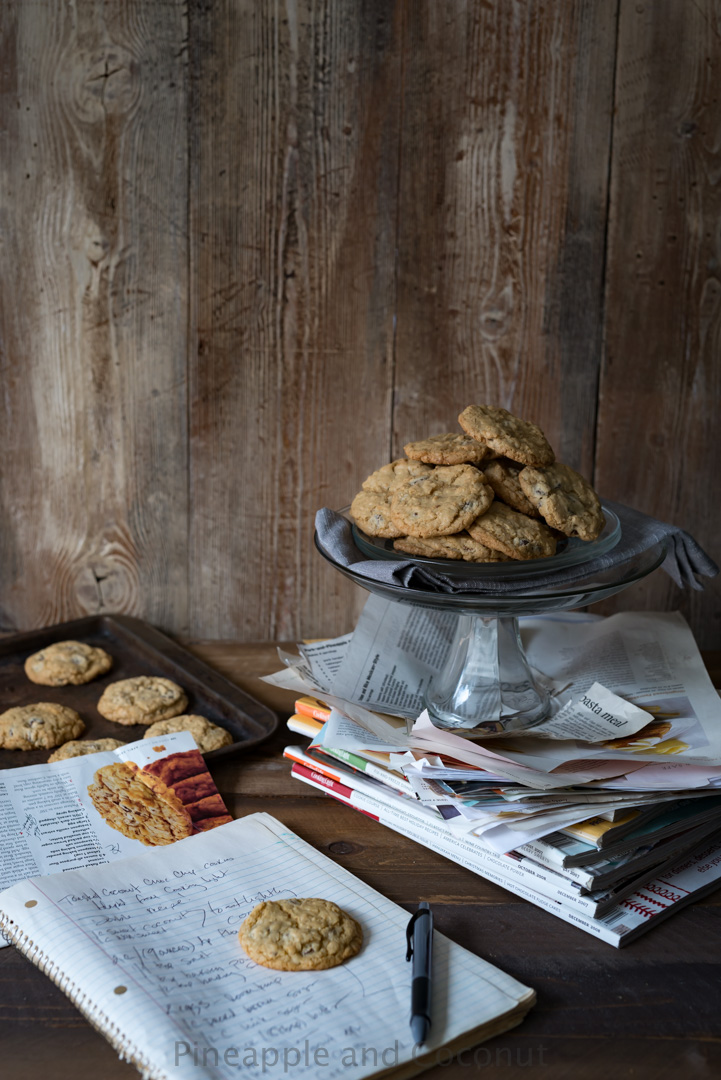 So until then, boxes it is. Lots of boxes. I opened one box one weekend and realized that ohmygoshIamahorder because it was FULL of old food magazines, news paper clippings. Recipes I had torn out of  magazines etc. that I had planned on one day organizing into binders. Yeah like that was going to happen.

This was pre-blogs, pre-pinterest stuff I had saved. I used to actually love getting food mags like Cooking Light, Food and Wine, Fine Cooking, Cooks Illustrated, Saveur, Food Network and I kept them all thinking one day I would make all the recipes.

I think I will have to live to 943 to make all the recipes. So I decided to sit down and go through them and throw out what I knew I wasn't ever going to make.

And realized that there were several of these magazine and recipe filled boxes. Hoarder status. 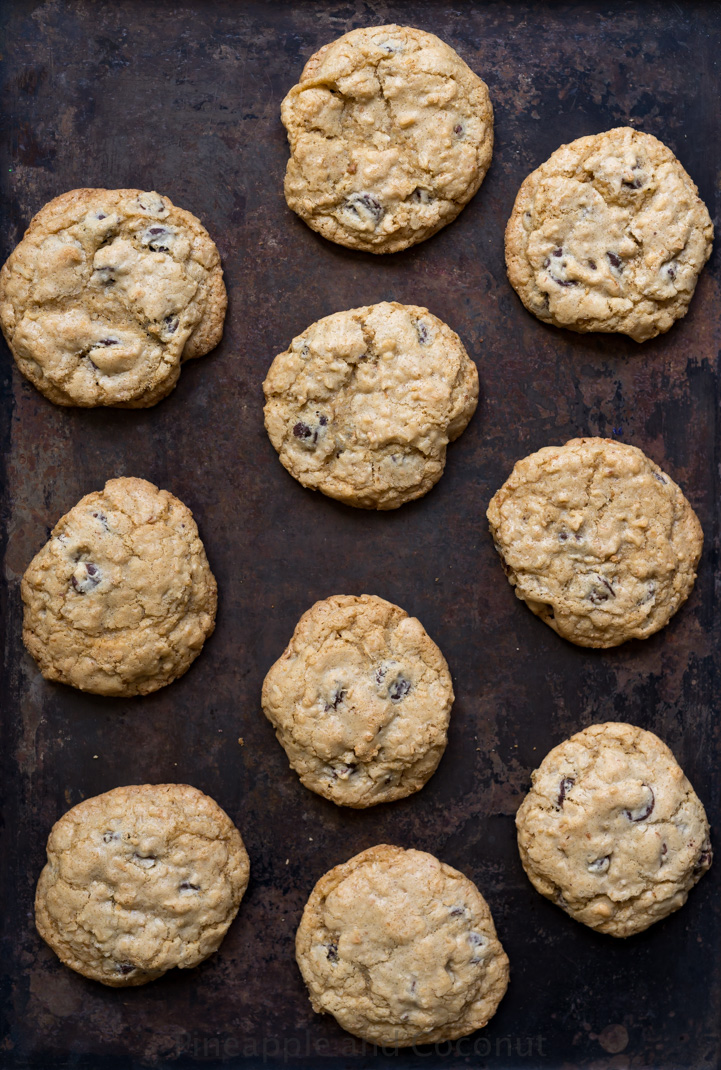 About a month ago I was almost all the way through one box when I came across this cookie recipe in Cooking Light magazine from 2010 and I remembered I wanted to make it back then.

Better late than never.  One thing I have always noticed about recipes in Cooking light, especially baked items, is that their idea of making the recipe "lighter" is a batch that doesn't make many cookies ( you know so if you eat them all in two days it's not THAT many calories) or they have things like "2 ounces of chocolate chips" for a batch of a dozen and a half cookies. 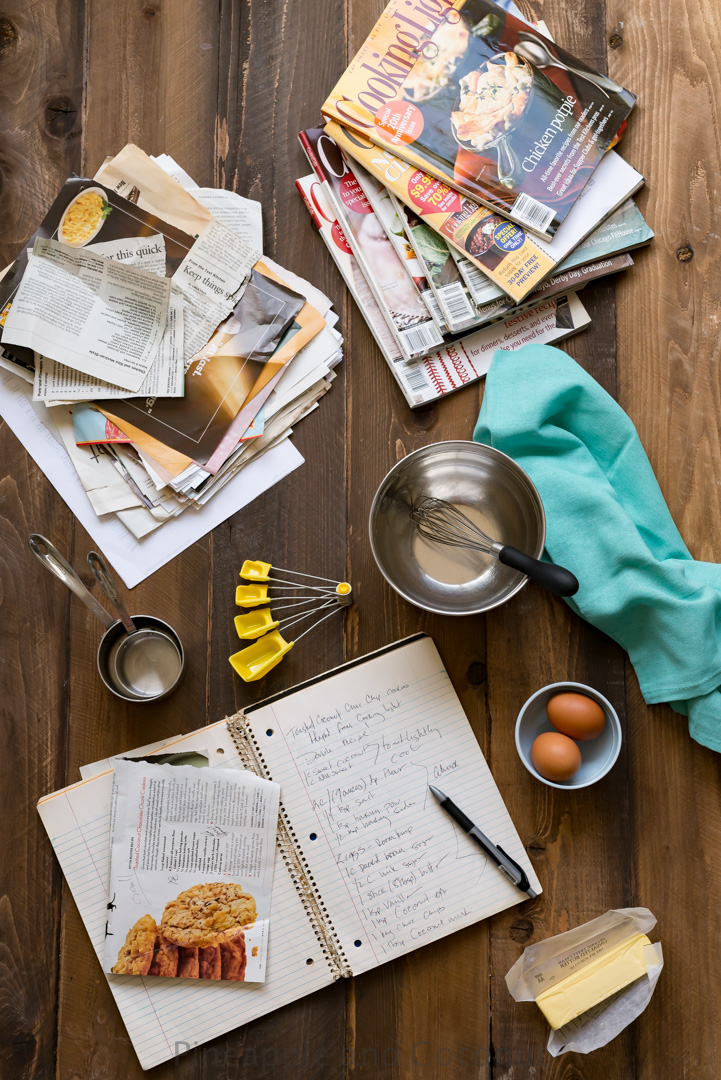 I love making some recipes lighter, not everything needs to be insanely calorie laden, but for me, cookies are a treat and I am ok with loading them up with more than 2 chocolate chips per cookie. I usually put in 2 cups of chocolate chips into a recipe. 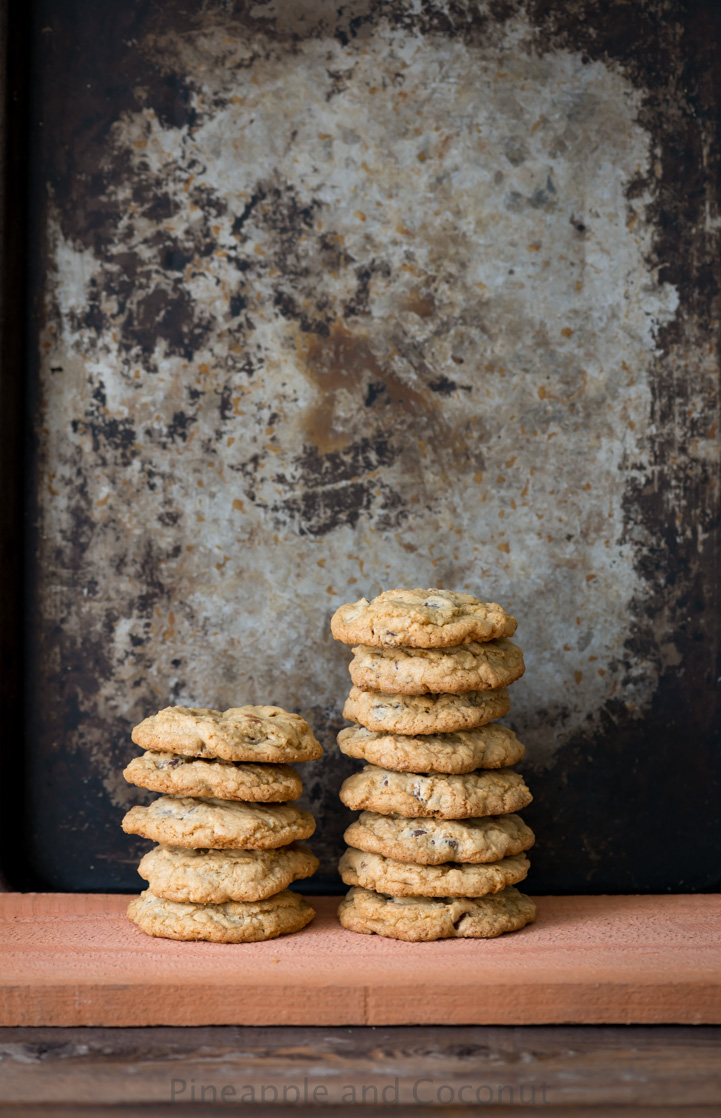 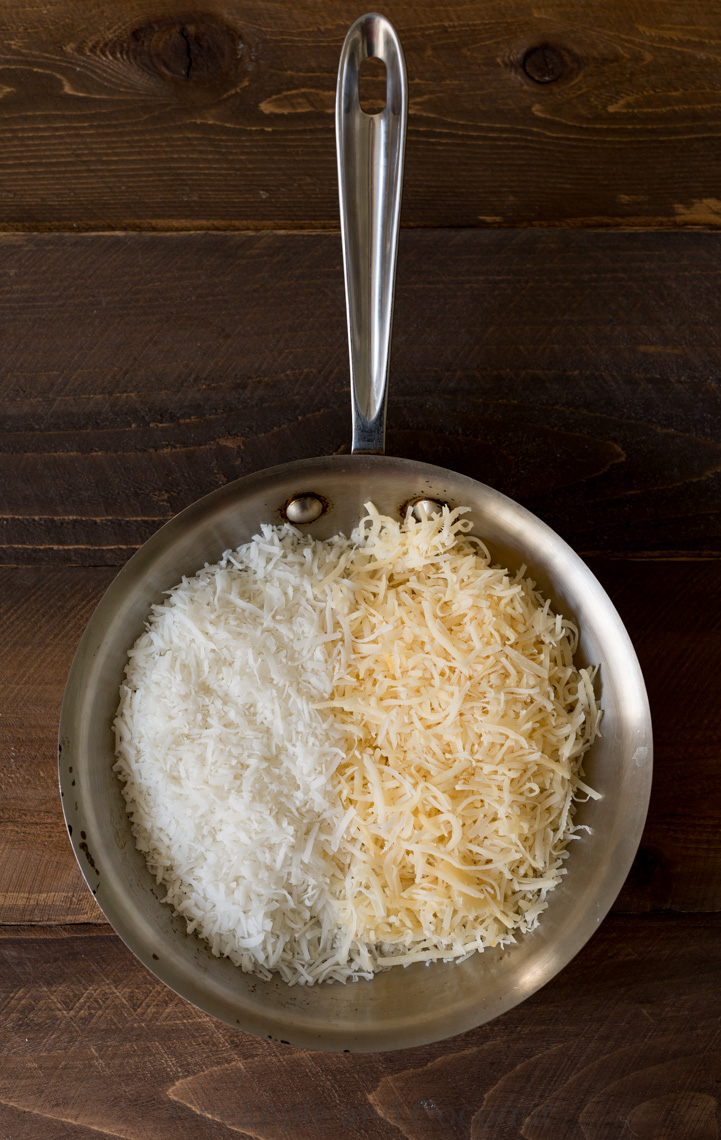 One of the things I adapted in this recipe, after doubling of course because if you are going to bake cookies and the batch only makes 12-16 you know that won't last a day , was the coconut.

I found a sweetened flaked coconut that I like from Trader Joes and it is only lightly sweetened so I used half that and half unsweetened ( also from Trader Joe's) and lightly toasted them mixed together. 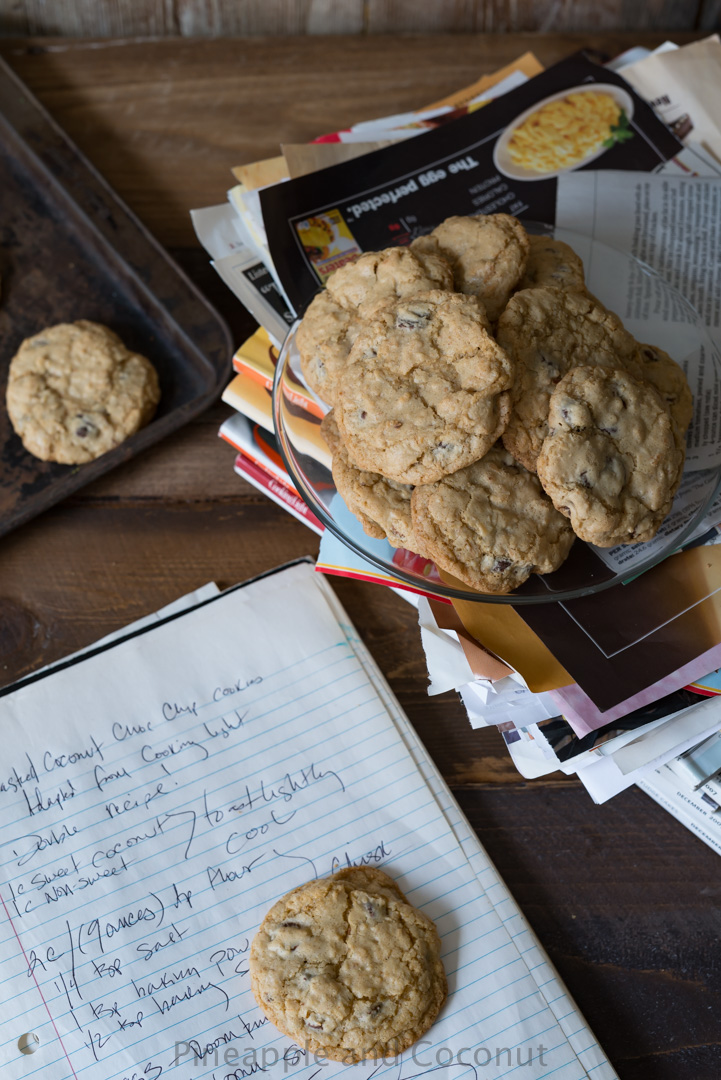 If you need me I will be going through piles and piles of hoarded magazines and recipes while eating these toasted coconut chocolate chip cookies. I might need to bake more cookies. I have a TON of magazines saved.
« Epic Hawaiian Pineapple Burger with Sweet Maui Onions and Homemade Taro Chips
Chicken and Andouille Sausage Pasta with Creamy Smoked Mozzarella Cream Sauce »