Toasted Coconut Layer Cake. A moist two layer coconut cake with a toasted coconut in the cake and buttercream, a rich coconut custard filling and toasted coconut chips. This is definitely for the hard core coconut lovers. It is ALLLL coconut.

Toasted Coconut Layer Cake. Just in time for fall.  ha ha. This year is flying by, like they all do, and I am now getting around to posting some recipes I tested this summer. 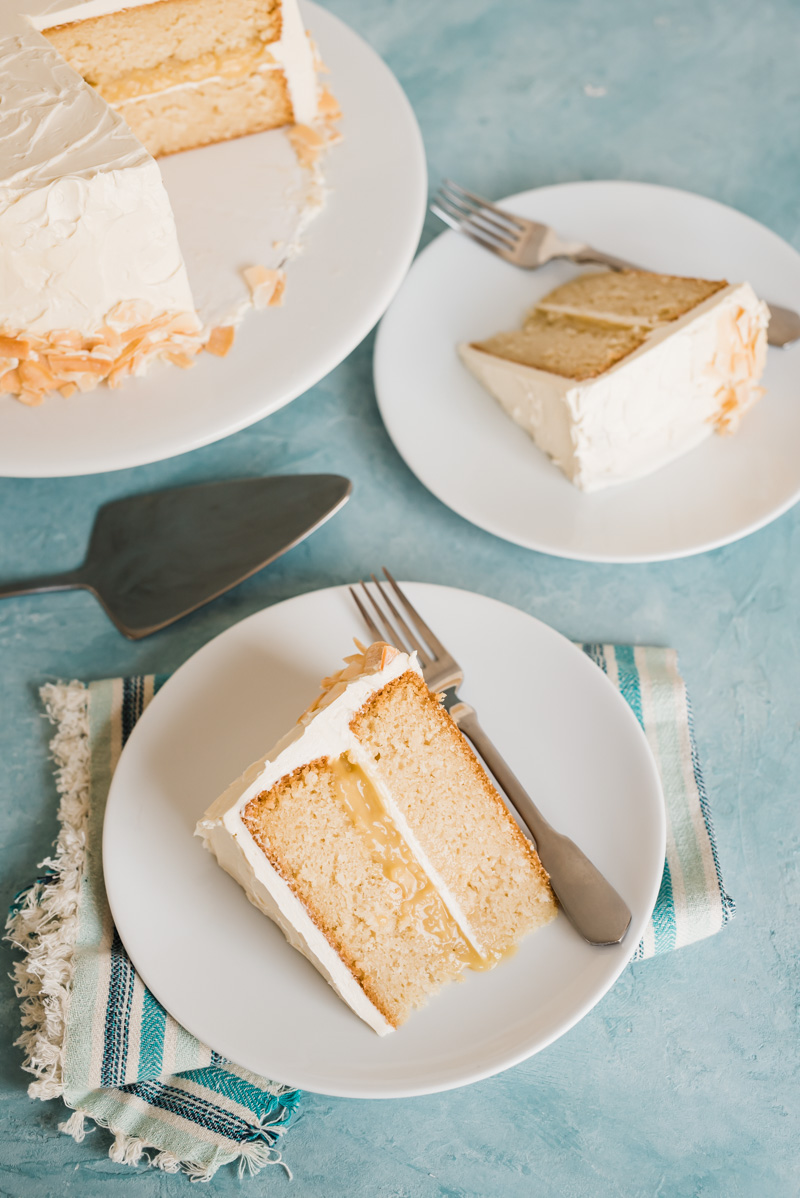 I know my summer flew by a lot faster than planned. Lots of tennis for my kids, the better they get, the more tournaments they play in. We also started swimming a lot more this summer as well. The more I am driving around to lessons and tennis clubs and the pool it leaves not as much time for my blog as I would like. Same goes for the school year. We switched schools again. A  new hybrid homeschool program. Its amazing but oh so much work.

I love it but it is taking some time to get adjusted too. Great thing is they can sleep in and get started on work when they want. No more rushing around in the morning to get ready for school, find shoes, iron uniforms. Except for the early mornings they have tennis lessons. With their coach and with me. I took on part of the coaching role now so we go out a few mornings a week with me as well to a court near our house. It's awesome having one so close to use.

My husband is in his last year of school as well as working full time still. With him so busy I am doing everything else from buying new sofas, chauffeuring the kids everywhere, learning math to be able to teach it to my kids, cooking all the meals and cleaning all the dishes. Its busy to say the least, but we love it. I wouldn't change a thing.

One good thing about me cooking all the time is I have been doing a ton of recipe testing. I have a lot of amazing recipes I am hoping to be able to share the rest of this year.  Enough about my life.  Let's dig in to this toasted coconut layer cake first, shall we? 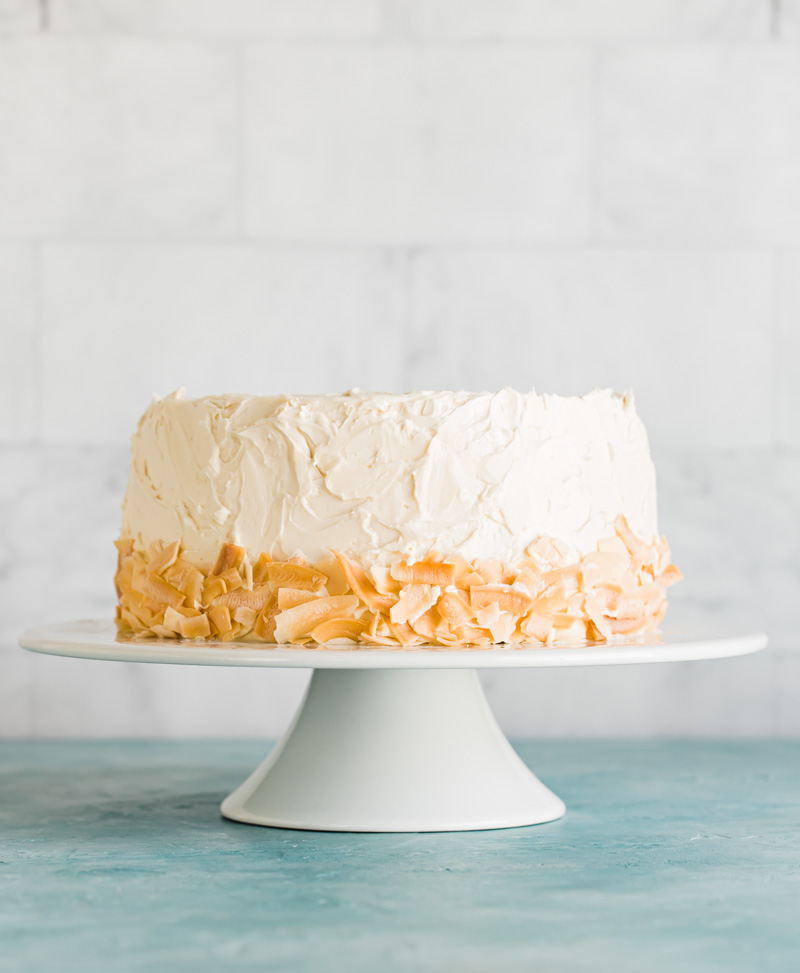 Once in a while I will ask on my social media pages what recipes my readers would like to see. This last time I had a few coconut requests, one being coconut cheesecake. I have only made three cheesecakes in my life (aside from testing them) so I am not super comfortable making them, aslo not my favorite to eat. Another friend told me about a coconut cake her grandmother used to make so I decided a layer cake was more my speed than a cheesecake. I have made many versions of a coconut layer cake in my lifetime and this toasted coconut version is my favorite. 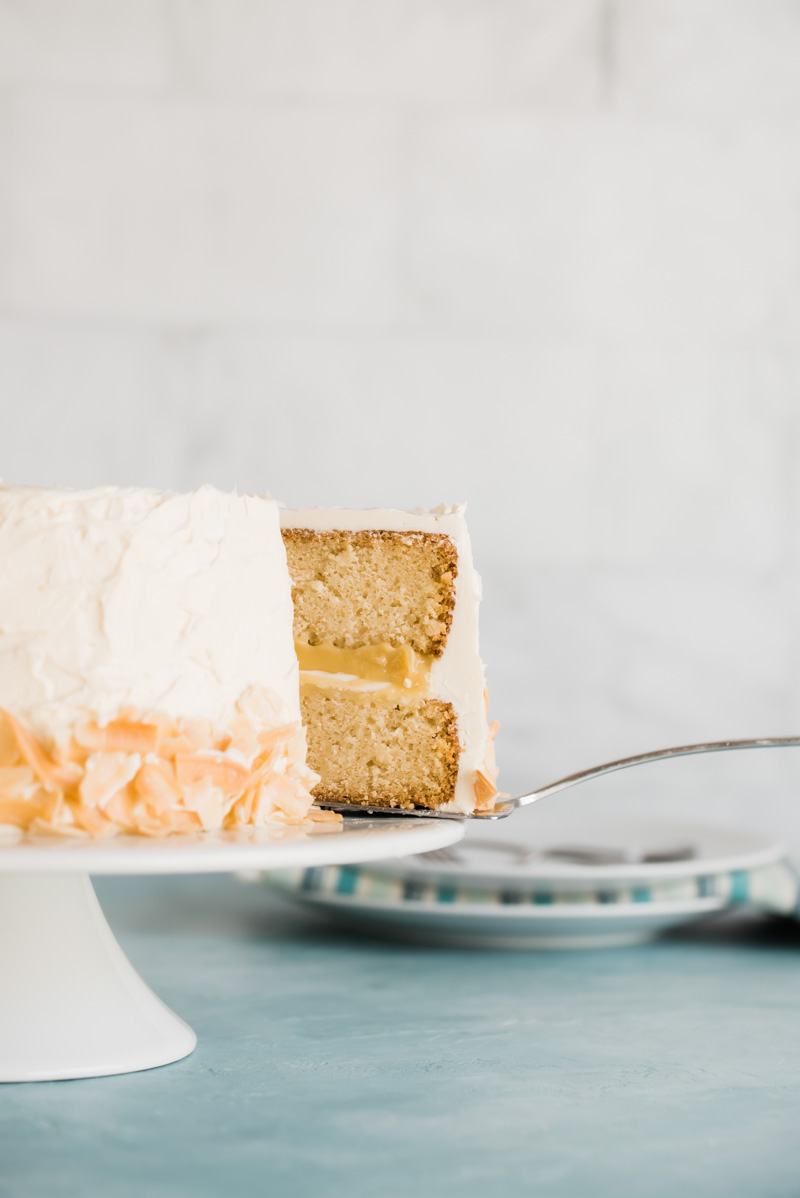 Of course I can't just make a basic coconut cake, I have to make it "fancier" with using toasted coconut in the buttercream and making a rich coconut custard filling. Of course these two steps are completely optional! That is what is great about this cake - you can customize it to how you want it. 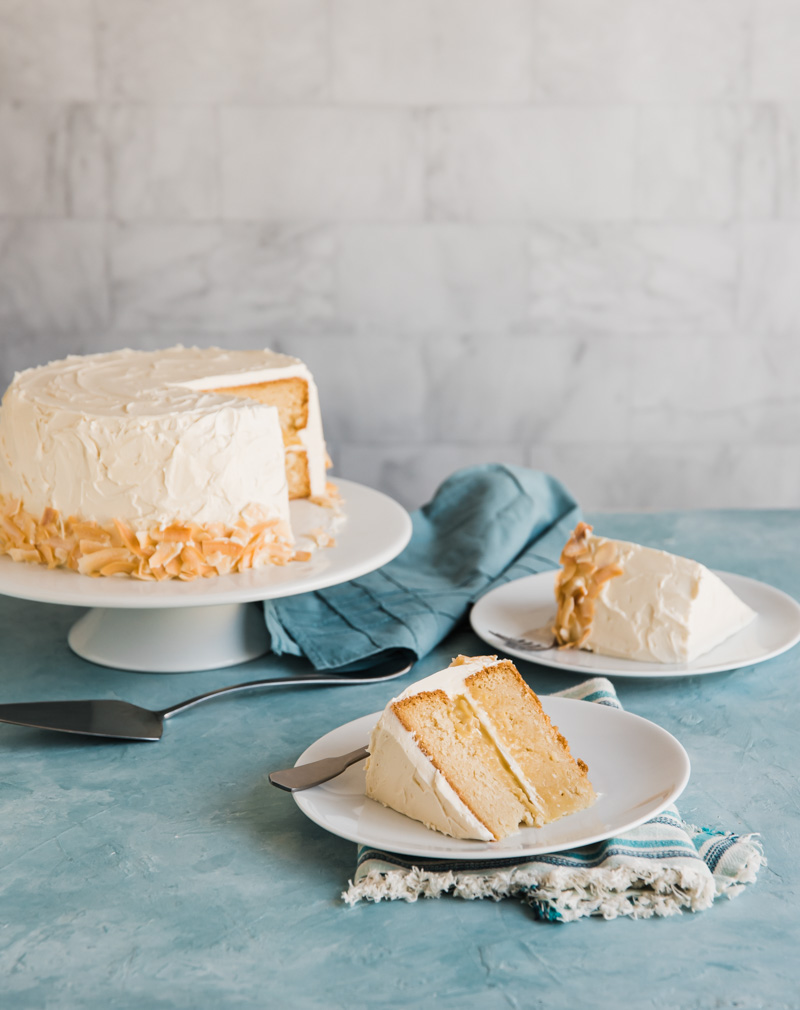 A few notes before baking this toasted coconut layer cake: 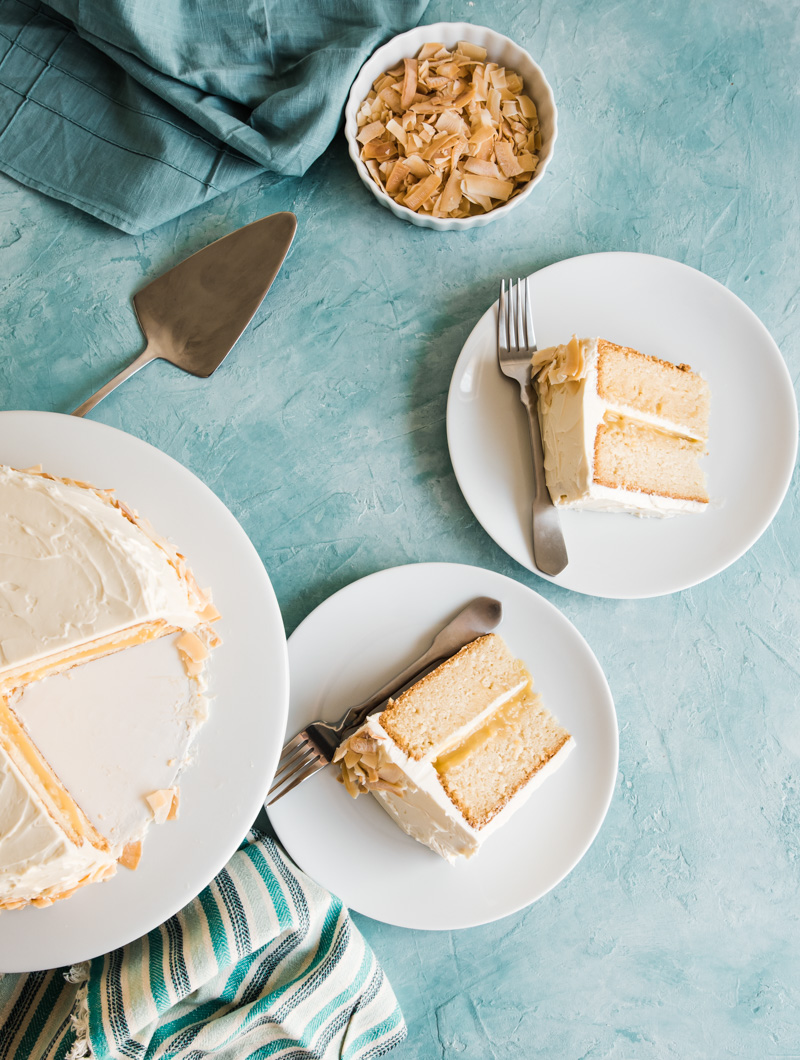 Prepare two 8” cake pans by spreading a little bit of butter on the bottom, topping with a parchment paper round, butter the paper then lightly dust with flour. Shake off any excess flour.  You can also use a baking spray in place of the butter and flour. 3” high side cake pans are preferred, you can use 2”high side pans, however, the cakes wont rise as high.

In a medium bowl whisk together the flour, baking powder, soda and salt. Set aside

Add in the egg whites one at a time, stopping the mixer to scrape down the sides of the bowl between each addition.

Add in the extracts and mix well. Set mixer speed to low then alternate adding in the flour mixture with the coconut mixture in three additions each. Once all is combined, stop the mixer and mix the batter with a spatula just to make sure all the flour has been added in and no streaks remain in the batter.

Divide the batter evenly between the prepared cake pans. Set in oven and bake 35-40 minutes or until golden and toothpick placed in center comes out with just a few crumbs. Let cool in pans for ten minutes. Invert onto wire cooling rack, remove pans and parchment paper and cool completely until ready to assemble.

Combine sugar, flour, coconut milk and salt in a saucepan set over medium heat. Stir until sugar is dissolved and mixture is steaming, 2-3 minutes. Whisk the egg yolks in a medium bowl then slowly add in the heated milk to the eggs, whisking constantly to temper the eggs.

Once the yolk mixture is heated and thoroughly mixed, add back to the saucepan and stir slowly until thickened, 6-8 minutes. Scrape the bottom often to keep the custard from sticking

Strain into a clean bowl to remove any cooked bits of yolks. Stir in the extracts, press a piece plastic wrap over the top of the custard, and chill completely until set.

First set the butter out on the counter to thaw slightly before starting the buttercream. It should be at cool room temperature before being added in.

Next, set a saucepan with one inch of water over medium heat and bring to a simmer. In a stand mixer bowl, whisk the egg whites with the sugar, salt and cream of tartar. Set the bowl over the simmering water and keep whisking until the sugar is completely dissolved and the mixture is hot, around 160-170 deg. About 5-7 minutes.

Transfer bowl to stand mixer, attach the whisk attachment, then slowly bring to full speed and whip until the bowl is room temperature, almost cool, to the touch, about 10 minutes.

Add in the butter one tablespoon at a time, mixing for a few seconds between each addition. The mixture may look liquid but keep mixing as you add in the butter.

Once it is all added in and mixed well, it will thicken and be very smooth.

Last add in the flavorings - coconut extract and or rum, toasted coconut syrup or sweetened coconut cream, and mix on medium low until well incorporated. Keep at room temperature until ready to use.

Trim off tops of cakes if there is a small dome to make a flat, even surface, place one layer cut side up on a cake plate or on a cardboard circle on a cake decorating turntable. Spread about a cup or so of buttercream about ¼ of an inch thick spreading into an even layer. Place some buttercream in a piping bag and cut off the tip about 1” up from the end. Pipe frosting around the edge to form a ½” or so border to keep the custard in. Fill with the custard, you might not use all, then top with the other cake layer, cut side down. Crumb coat the cake with buttercream - a thin layer around the edges and top to seal the cake, especially the middle to keep any custard from seeping out, then chill to set the buttercream.

Finish frosting it with another smooth layer then using a small spatula make swirls around the edges and top. Press large, toasted coconut chips around the bottom two inches of the cake. Serve at room temperature. Keep chilled until ready to use, thaw before serving.

Combine all ingredients in a sauce pan and bring to a boil, stir until sugar is dissolved. Remove from heat and let sit for an hour. Strain into a bowl or bottle with a lid. Chill completely before using.

There are several optional steps to this cake. 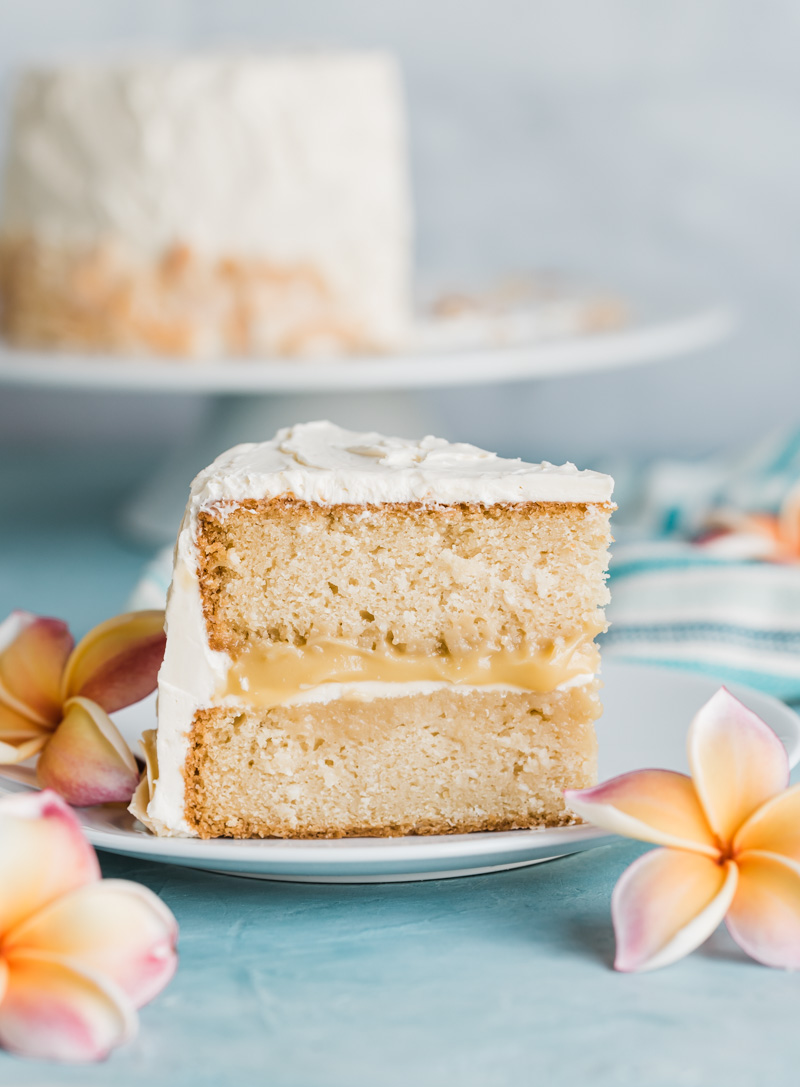