Coconut Butter Poached Lobster with Pineapple Green Curry Sauce. I would eat this daily if I could. It is just that good.

Actually the title of this recipe is Coconut and Butter Poached Lobster with Purple Sweet Potato Puree, Baby Bok Choy and Pineapple Green Curry Sauce. But there wasn’t enough space to type that all. How does one go about naming a recipe without naming all the ingredients but telling what it is. You leave out one part and people think ” Hey what is that purple stuff it’s not mentioned in the title and neither are those green veggie looking things”  Or you give too long of a title and it sounds way to complicated and no one would ever want to attempt to make it at home. Which is too bad because, um, coconut AND butter poached lobster is like the most insanely good lobster I have ever eaten, and I have eaten A LOT of lobster in my time. 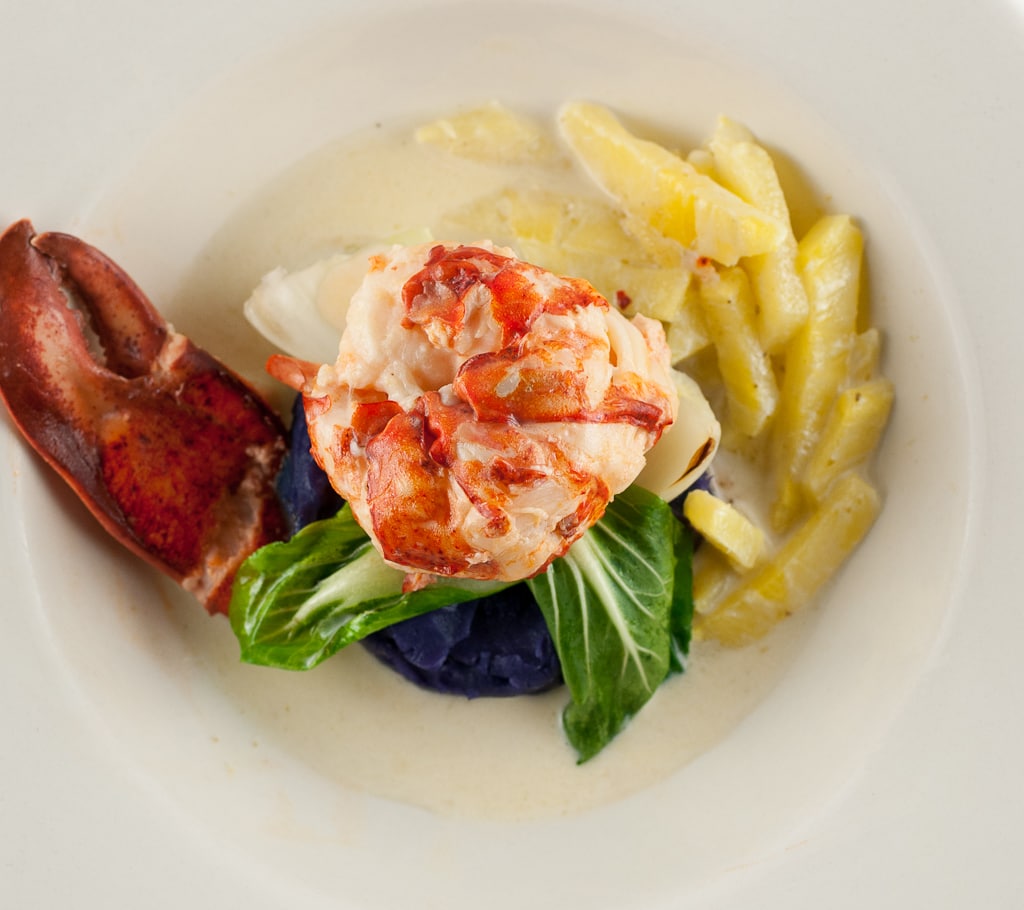 Growing up in Southern California had its perks with amazing fresh seafood always available year round, whether it came from a local seafood market or a family friend that was a lobster fisherman, we were very spoiled with lobster growing up so that was our Christmas dinner every year. Not a typical “traditional” holiday meal but it was our tradition and I loved it. I think a lot of people look at lobster or other shellfish like king crab legs as something as a meal for a special occasion like a holiday or anniversary but I could seriously eat it every day if given the opportunity, and funds. ha ha

So when a friend of mine asked me if I was interested in receiving some lobster from Lobster.com in exchange for developing a recipe and blogging about you bet your booty I didn’t have to think twice about it.  Pam, from Practically Primal, emailed me some of the details and got me in contact with the  marketing specialist from Lobster.com who had the lobsters shipped to me overnight. 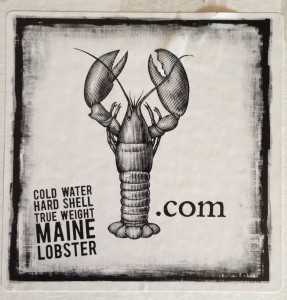 I so totally did a little happy dance when I found out about this and again when I saw the box of live lobster at my door the next day. I had talked with Pam about recipe ideas and decided on something Hawaiian-ish to go with the theme of my blog. So I sat down and came up with this recipe after looking on line for ideas, cooking methods and recipes. I didn’t find any one that I wanted to copy exactly but I had an idea of flavors and took cooking methods from several to use with mine. I have always eaten lobster, never cooked it. My dad always did the cooking, usually grilling or broiling them, so this was totally a new adventure for me. 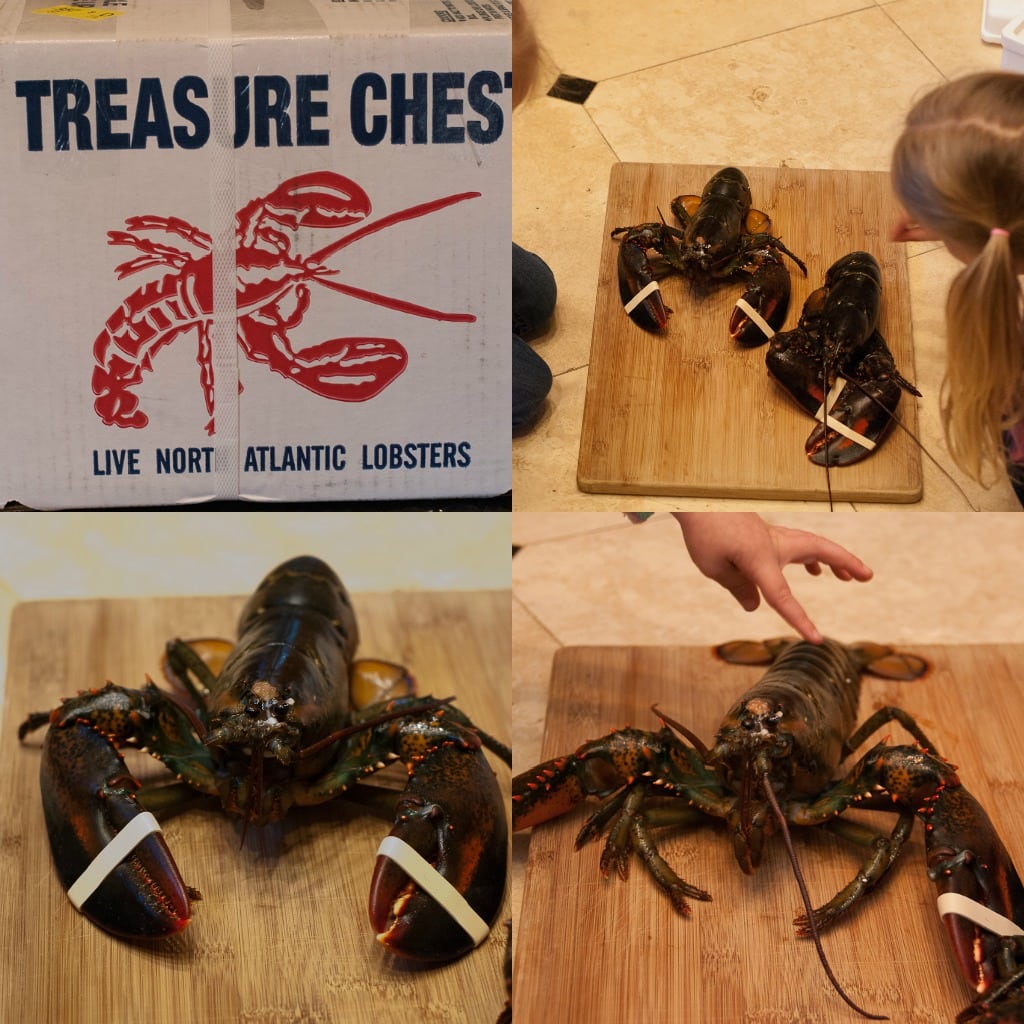 Best treasure chest ever. Two one and a half pound lobsters. My favorite bug. I told my kids that I had live bugs in the box and they wanted to see. My 4 year old ” mom those aren’t bugs those are lobsters!!”  and proceeded to poke them, same with my 2 year old. We play with our food. One of the lobsters was more chill, no pun intended since they arrived packed on ice to keep them alive, and the other was quite feisty.

I was looking up the best way to go about the cooking method I was planning on when my modem decided to crash. Again. So I went into slight panic mode when the one method I had pulled up online was no longer accessible. I had live lobsters, a pot of water but that was it!!  I don’t know why I did but I looked at the packing slip from the lobsters and discovered that the company, Lobster.com, had included a “Ditty Bag”  STOKED. 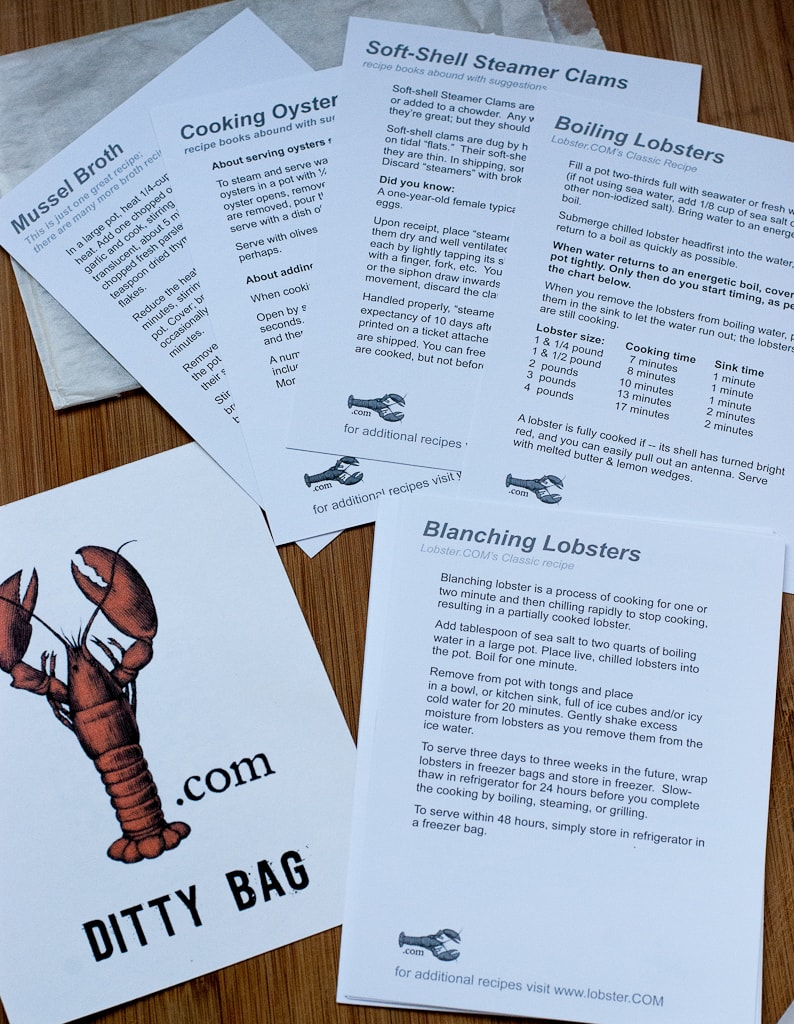 Seriously how sweet is this? A whole packet of different recipes and methods for not only the lobster they sell but other shellfish and crustaceans. This was such a life saver! And now I have more recipes I want to try, like the steamer clams, I LOVE steamer clams. 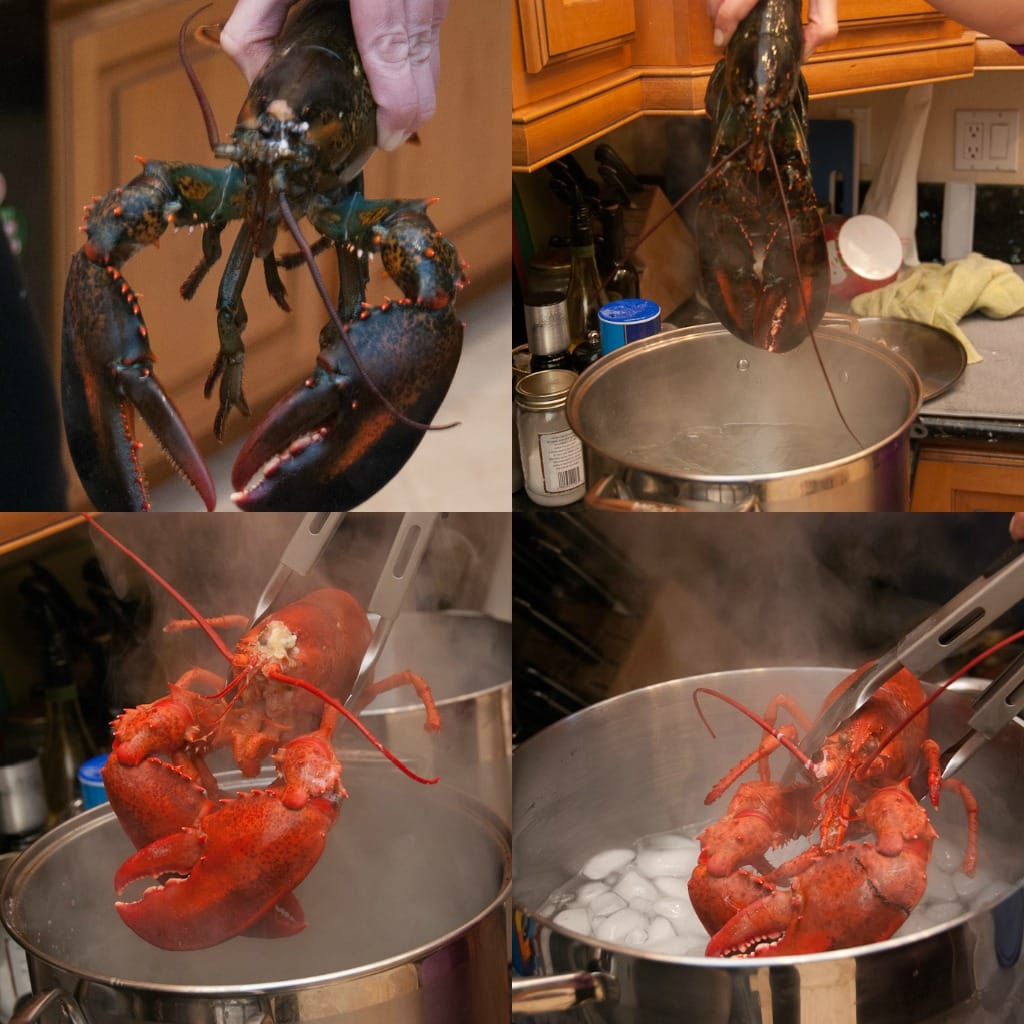 I was brave and took the rubber bands off the claws before plunging them into their “bath” and the feisty one was trying to pinch me so I spazzed out slightly and dropped him in the water instead of gently placing. Oops. 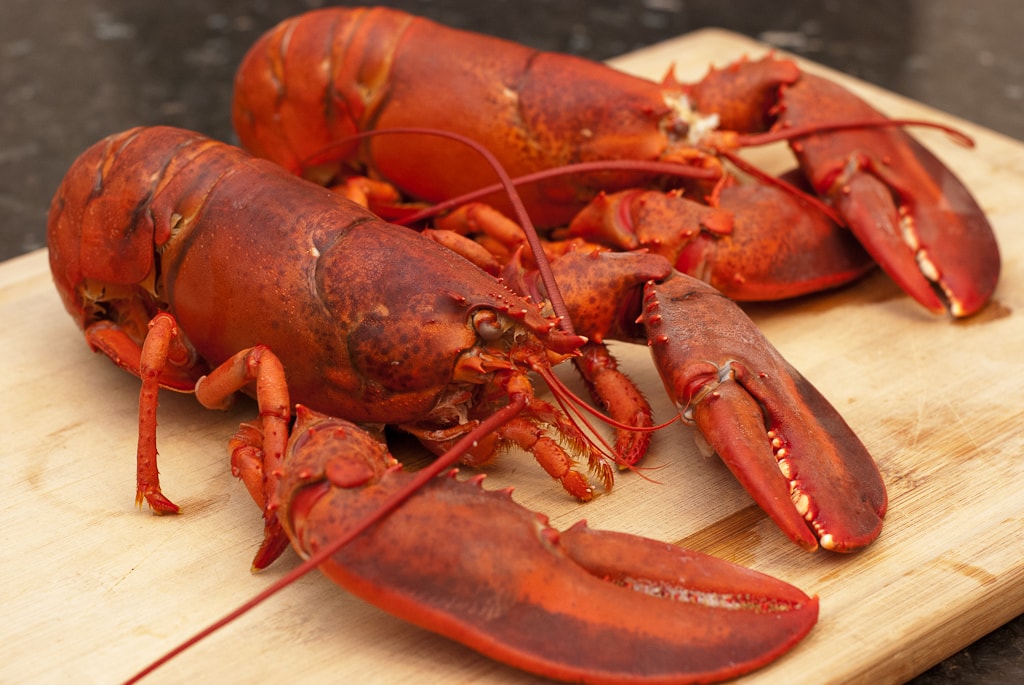 Par-boiled. I didn’t take any pictures of the cutting of the meat out part, it was really messy and didn’t want to keep washing my hands for pics. My husband was busy with our kids at that point so he couldn’t play photographer for me. They wouldn’t have made for the prettiest pictures either as I was quite messy with extracting the lobster meat. I used scissors which helped keep it all intact, especially with the delicate claw meat.

A little break from the lobstah and on to my most favorite potato of all, the purple sweet potato. Also called Ube, Okinawan sweet potato, Hawaiian sweet potato. LOVE these. I have only ever had them at luau’s and in Hawaii. I found a market that sold them in Oregon when we used to live there and would stock up whenever I could. They have AMAZING flavor. They are starchier than normal sweets and take a little longer to cook, but their flavor is amazing and I add in coconut milk to make them creamier. 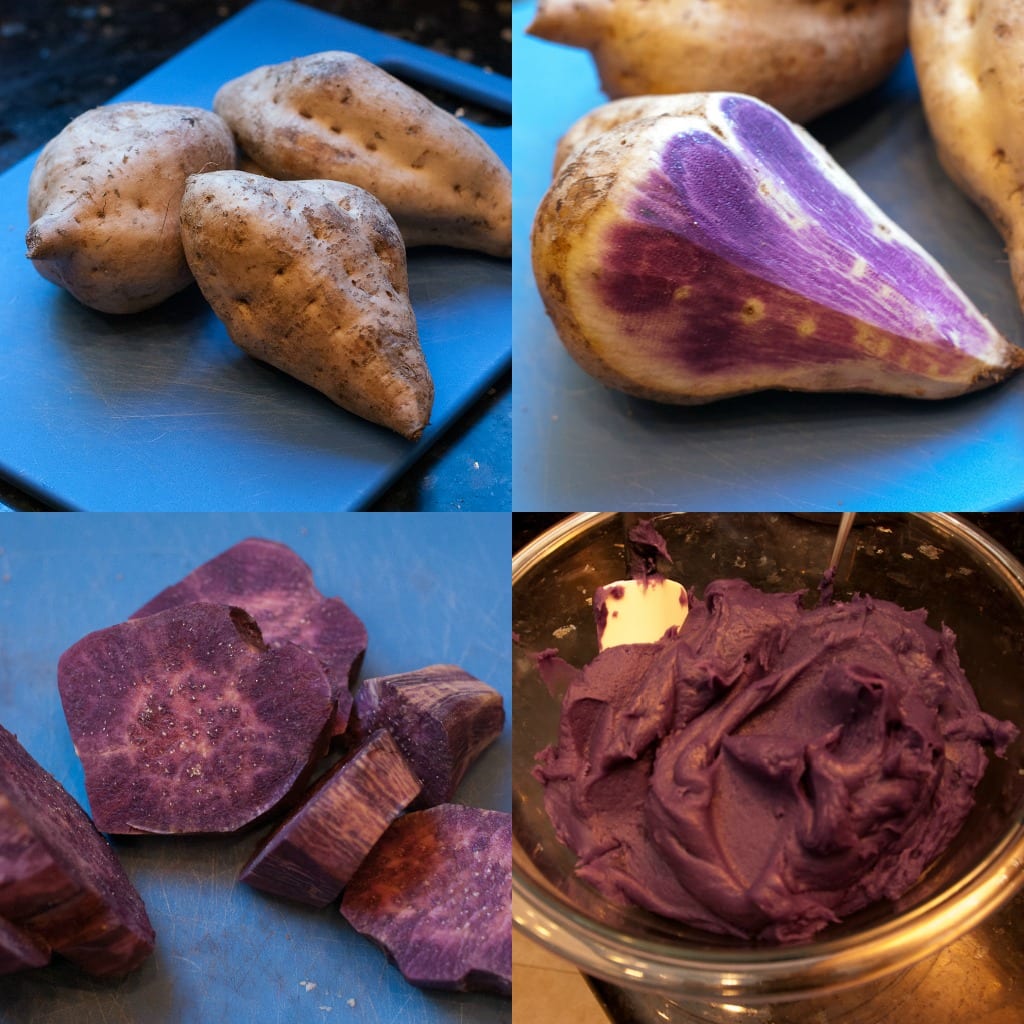 One would never think that these are naturally colored this dark purple inside given the light color of the skin since other sweet potatoes are the same color inside and out. If you haven’t tried these before I say you should, you can find them at Asian markets, and you won’t be disappointed. Unless you don’t like sweet potatoes. I find that these are better made as a mash or a puree than as fries, but I may experiment with baking  them as fries again. I made them once and they were very dry. I’ll get back to you on that one.

Once I had removed all the lobster from the shells and prepped the poaching liquid it was time to finish cooking the lobster. 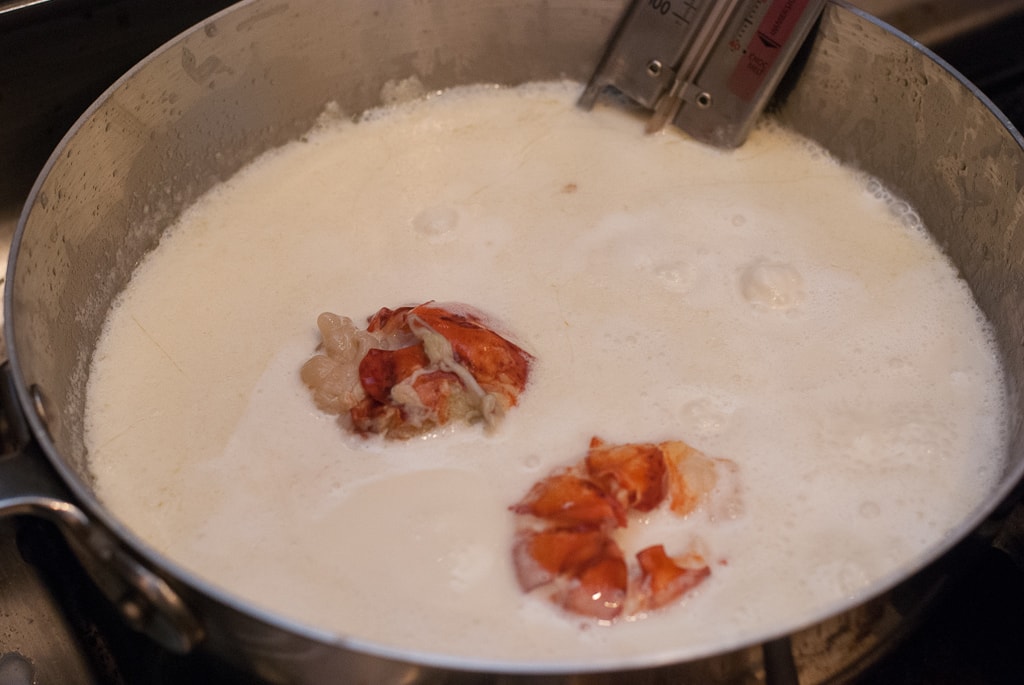 I kept the liquid at 185 deg f and poached the lobster for a total of 8 minutes, but added in different sections at different times since some pieces didn’t take as long as others to cook. I think that poaching is a little more forgiving than grilling or broiling, since I thought it wasn’t quite done and took one of the tails and poached for 2 minutes longer but it made no difference in texture. I am used to more chewy lobster from it being grilled ( probably for too long too – sorry dad) so when I tasted the lobster that I poached and the texture was like butter I thought maybe it wasn’t done, but it was and OH WOW is butter poached lobster insanely good. So I told my dad I am cooking lobster from now on. ha ha 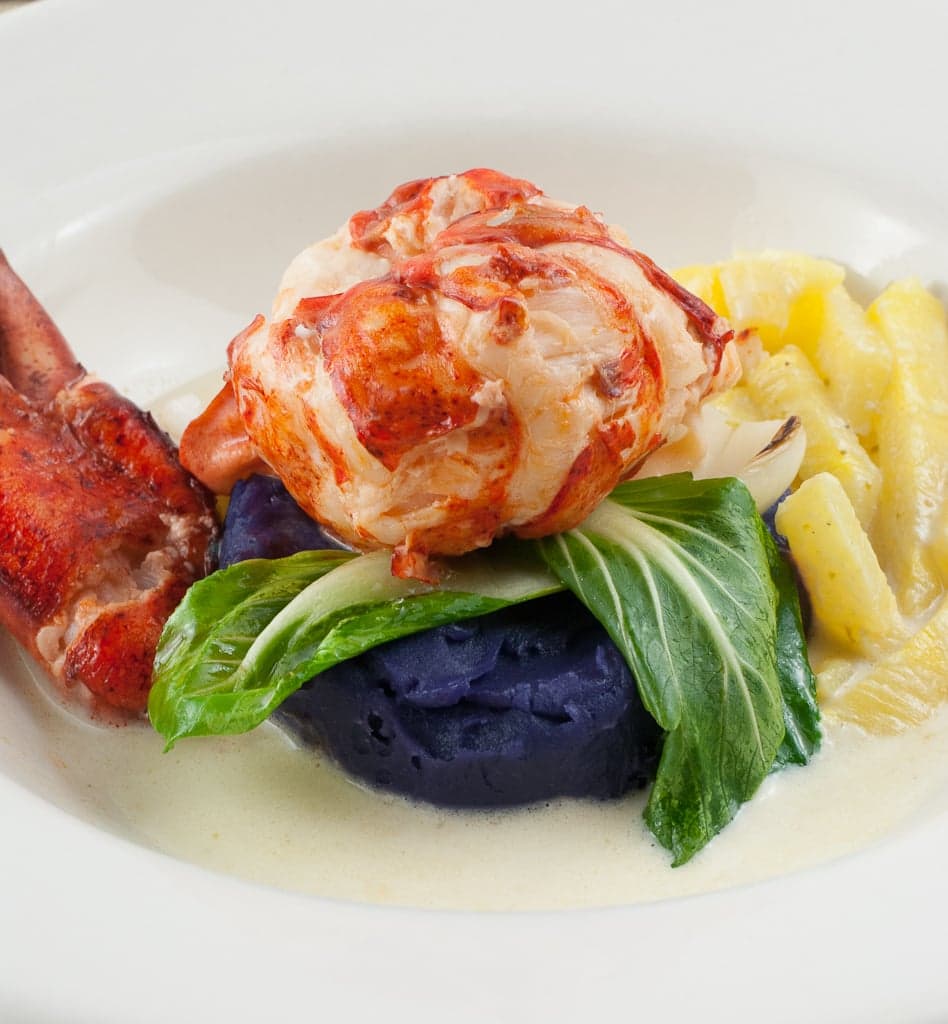 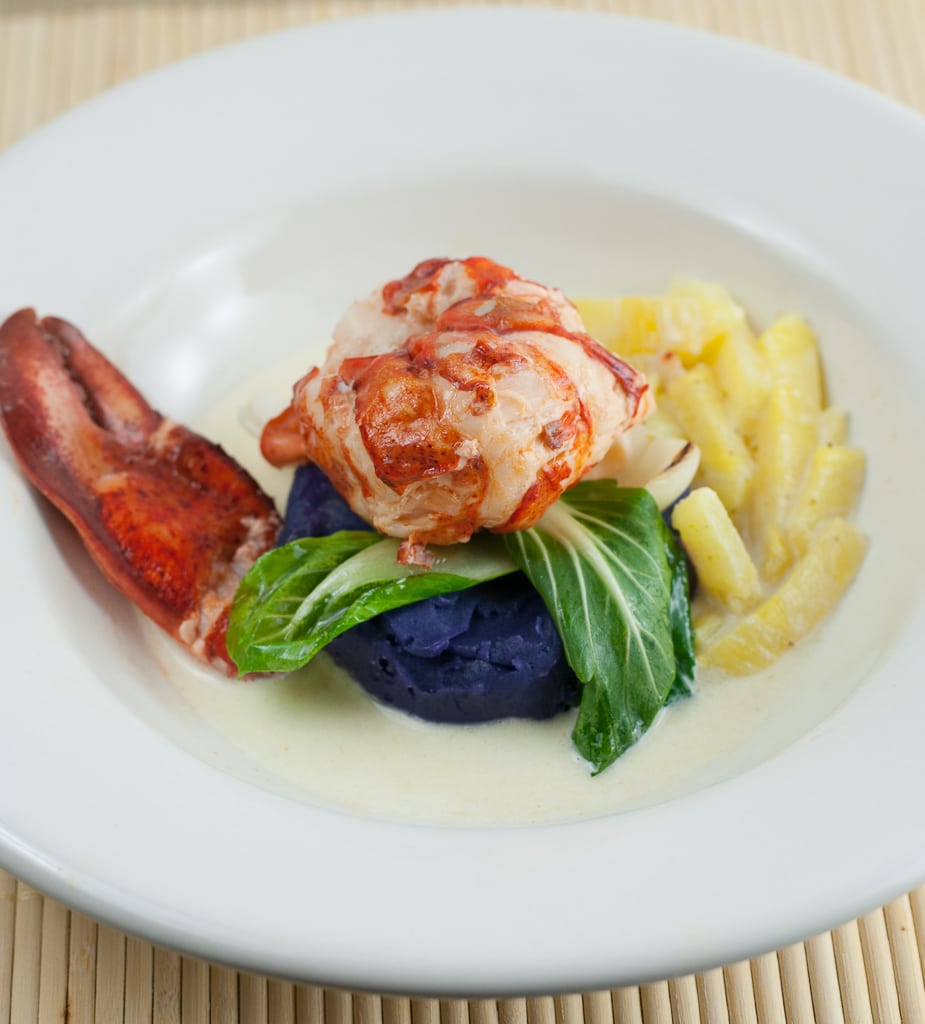 I took pictures of the dish rather quickly because I wanted to eat the meal HOT!!  So good. The flavors all worked together so well. I love Thai green curry and knew that I wanted to incorporate it in the sauce and I am so glad I did. I only added a little bit of the paste since I find it to be really spicy, but with the sweetness of the pineapple and creaminess of the butter and coconut it just really worked so well. This would be a great New Year’s recipe. Why not ring in the New Years with coconut butter poached lobster?

I received two lobsters from Lobster.com for this post. I wasn’t compensated any other way and opinions are my own. However I have to say these were some of the best lobsters I have ever tasted and I highly recommend ordering from Lobster.com. Life is way to short not to have live lobster delivered overnight to your front door at least once. Thanks again to my friends Jen and Dave for suggesting to their friends that I be included to receive lobsters and thanks to Pam for setting it up and a very special thanks to Lobster.Com. I am thrilled to be asked to be a part of this. And am more than happy to develop more lobster recipes in the future. Did I mention I love lobster? ha ha.