I love creepy Halloween cocktails and I had some fun creating these.  Creepy Halloween Eyeball Martini. Or “Eyeball-tini” as my kids like to call it since Shrek in one of the gazillion Shrek movie drinks eyeball-tinis.

You could also just call it a lychee, matcha and blood orange martini if the eyeball part grosses you out. Any way you call it, these are creepy and delicious. 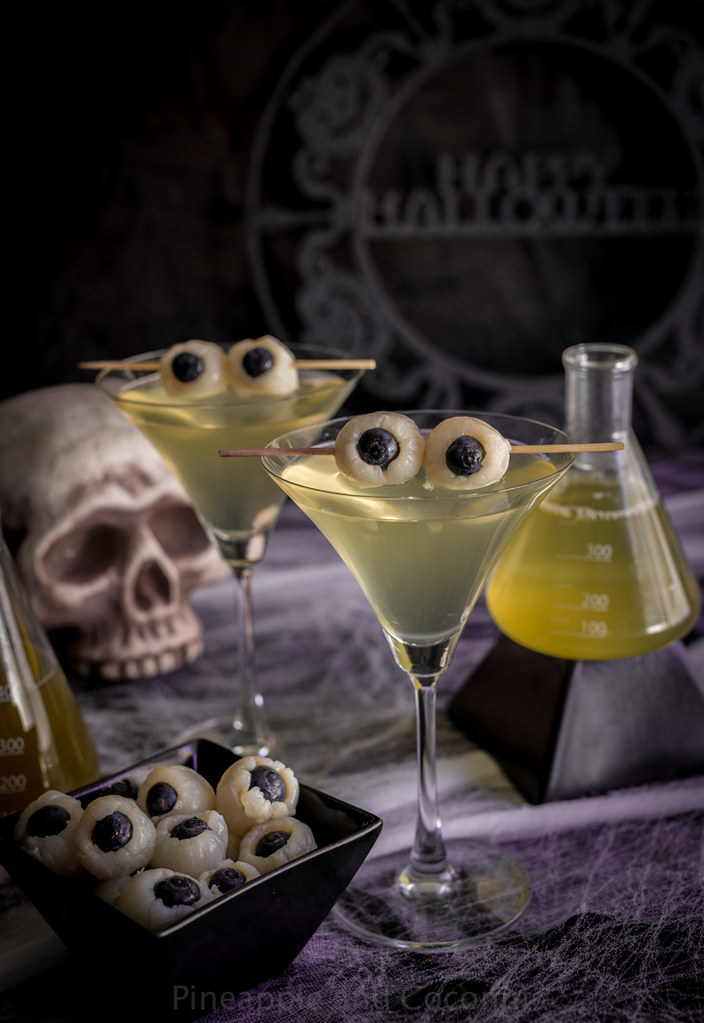 I love lychees, their flavor reminds me of one of my favorite liqueur, Elderflower. I used the juice from the canned lychees in this cocktail. There is a lot of leftover juice/syrup from the can that you can use for more cocktails, or reserve for later. It freezes easily.

Non-alcoholic versions of these cocktails are super refreshing and good for everyone, not just kids! 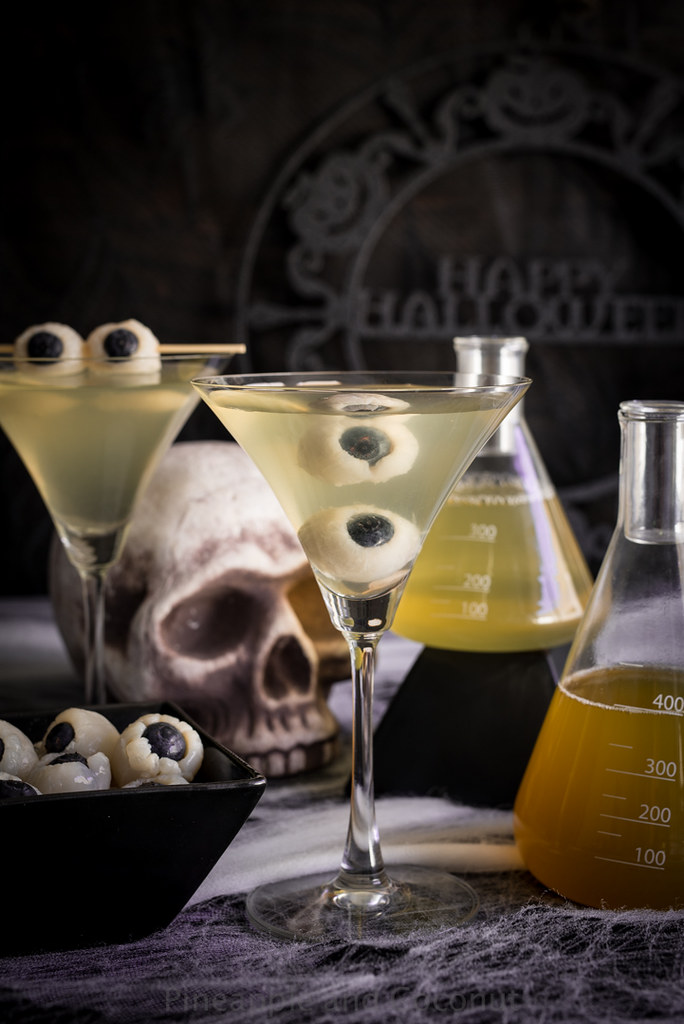 I was thinking at first that this creepy eyeball martini might be a little too gross, but I went for it anyway. So many “gross” Halloween foods that kids love, why not make something for the adults?  The “eyeballs” are lychees and fresh blueberries. They lychees have a slippery texture so I think they look pretty realistic. For my Halloween standards that is, and they passed the gross test from my kids. They definitely thought these were gross and a little creepy. 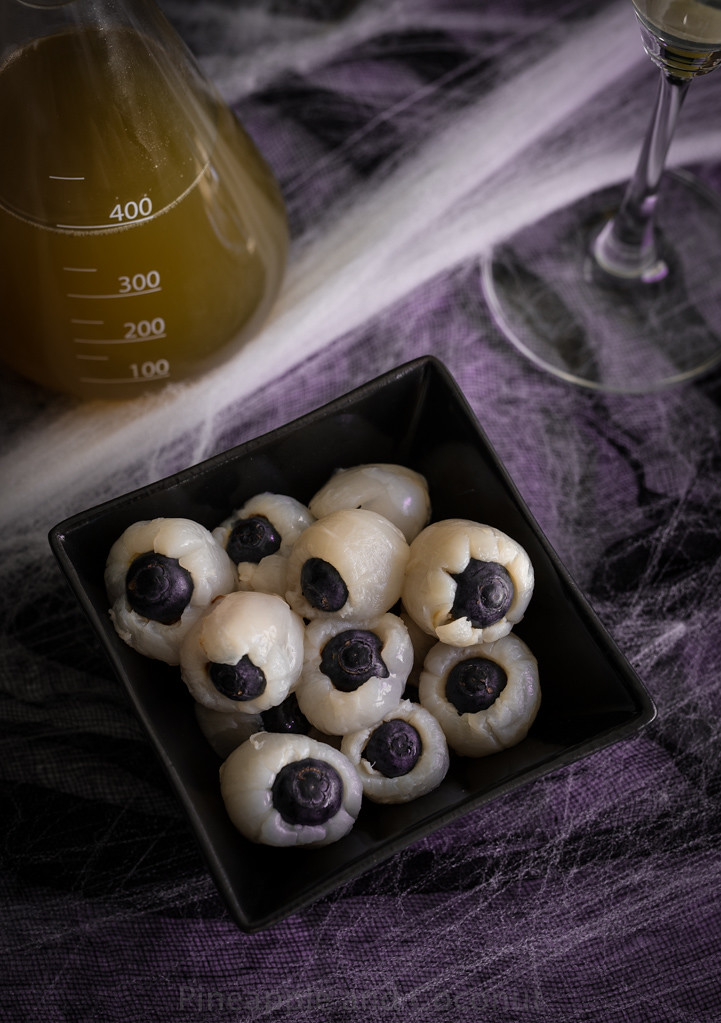 When I first was creating the cocktail I loved the flavor of the lychee juice and the vodka together but I wanted something more. I also wanted the drink to have a greenish-yellow tinge to it without artificial color.  I did several tests with a few different brands of green tea I have as well as pure matcha powder.

The best, greenest color I found was from Republic of Tea Double Green Matcha Tea. I wanted to do more than just add green tea to the martini so I had an ” ah ha!” moment and made simple syrup with it. Ooh wow. So good! 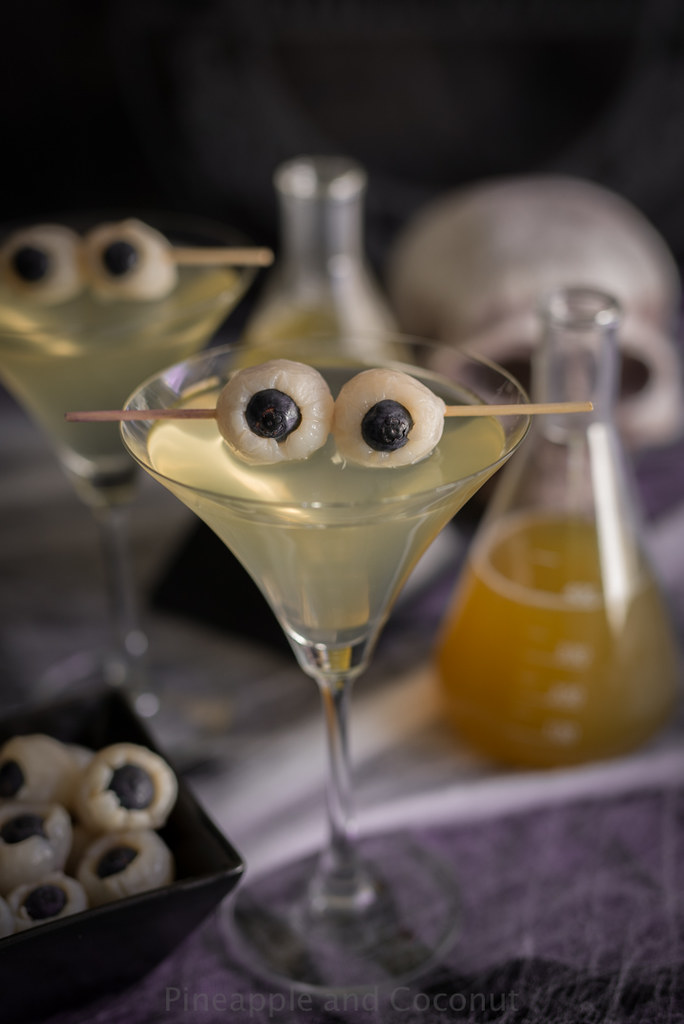 The eyeballs remind me of “Beetlejuice”. That is one of my favorite movies. Its campy, its funny and has a good amount of creep factor to it without being too gross. I love Halloween, but I am not a fan of the super duper gross, gory and the whole obsession with super bloody zombie TV shows is beyond me. But I have many friends that love that stuff. 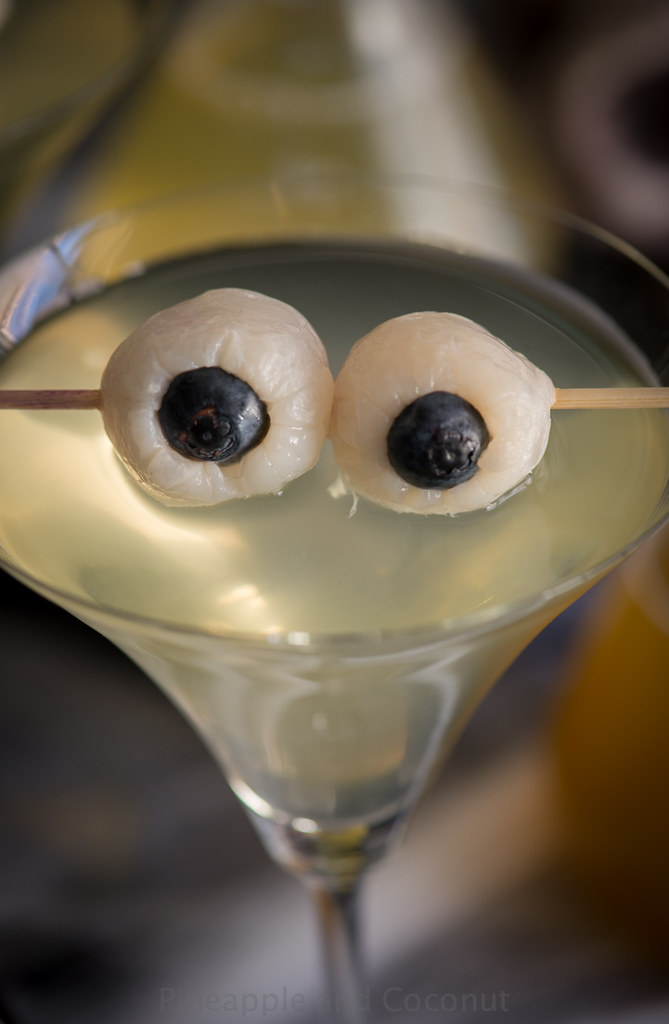 The martini is watching you… I showed these pics to my friend Sam who’s birthday just so happens to be on Halloween and she suggested taking pics with the eyeballs “floating” in the martinis. They are creepy however you decide to garnish the drinks with them. And they also make for tasty snacks. The lychees stuffed with blueberries are going into my daughters’ lunches this week.

My girls had fun helping me make the eyeballs, and I was amazed I had enough for the cocktail photos,  they kept eating the lychees and blueberries!! 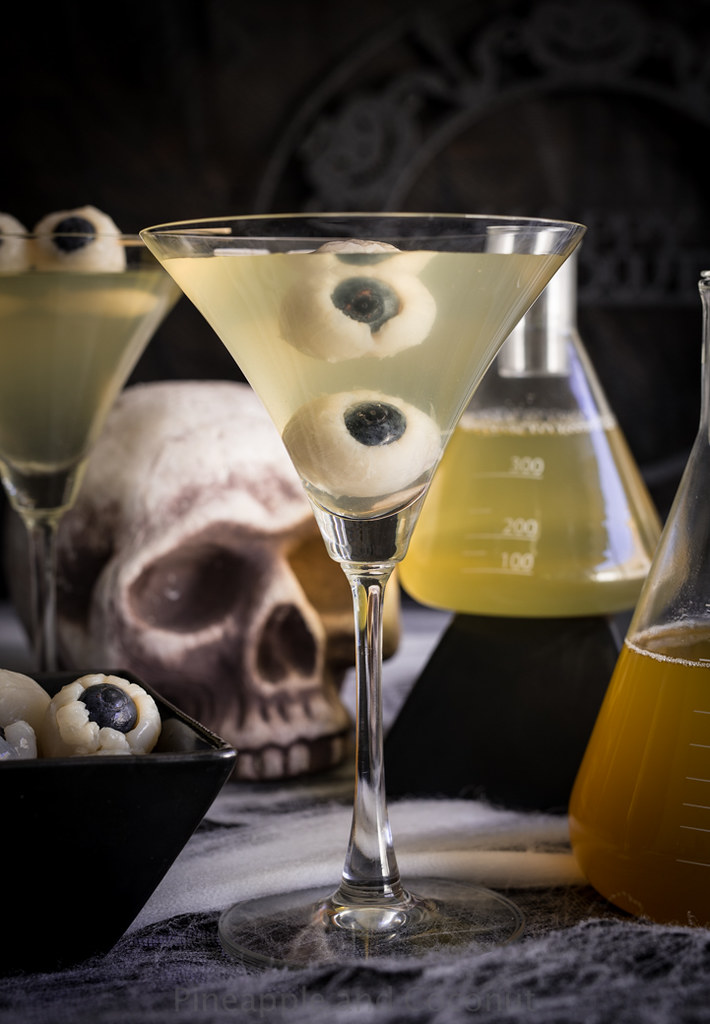 This recipe calls for two martinis, but it is easy to make a larger batch, even a pitchers worth to have at a Halloween party. All the components can be made in larger quantities easily. A few notes before the recipe:

For the Simple Syrup:

For the Simple Syrup:

Bring water to a boil and pour into glass measuring cup. Let sit for one minute then add the green tea bag. Let steep 3 minutes. Remove the bag and add in the sugar, stir until dissolved then chill completely before using. This makes more than the drink calls for, store the remaining simply syrup in an airtight container in the refrigerator. Use it to sweeten other cocktails or even just a cup of green tea.

Fill a cocktail shaker with ice, add in all the cocktail ingredients, shake well and divide between two martini glasses. Take a couple of the lychee fruits and put blueberries in them to make the “eyeballs” either sink a couple into the drinks or skewer and rest on top. Serve drinks chilled.